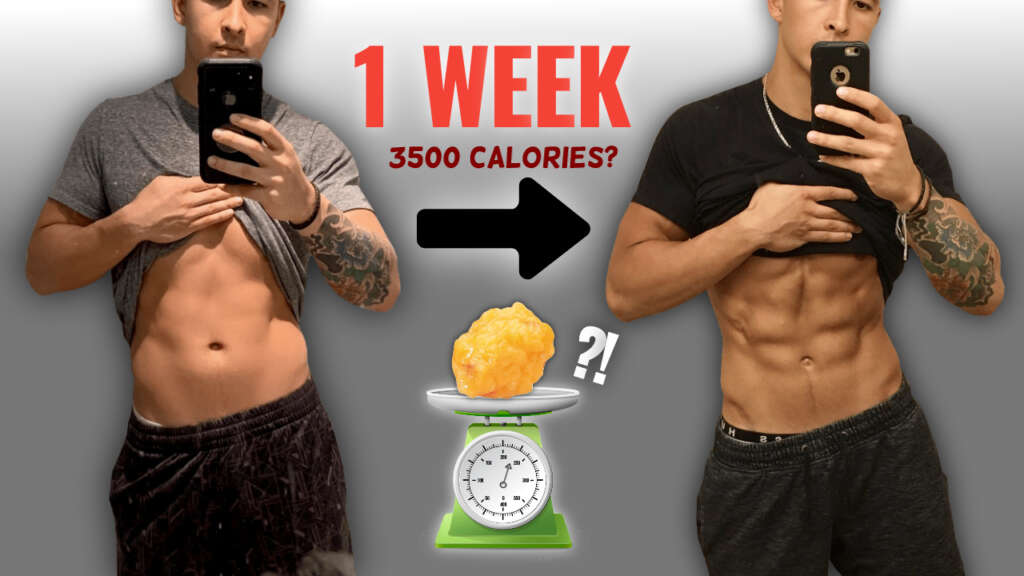 Therefore, when you take in (consuming a food) less energy every day (500 cal less) than you expend, you have a negative daily energy balance equal to 500. If you start with such a regime on Monday you should lose 1 lb of fat by the end of Friday. However, is this so called “3500-calorie weight loss rule” true, or just a myth without any scientific evidence?

The real truth behind the 3500-calorie weight loss rule

First of all it should be stressed from the start that this is a common myth (half-myth at best). Cutting 3500 calories will definitely lead to weight loss, but not as much as that rule of thumb would predict.

If a person decreases energy intake by 500 calories per day, theoretically, it should result in a loss of 1 pound of fat in 7 days (500 x 7 = 3500). But research has shown – and many people have experienced – that even when dieters carefully balance caloric input against caloric output, weight loss does not always result as predicted.

That is because the number of calories that must be expended to lose one pound of fat changes depending on the length of the diet, the resetting of the body’s setpoint for body weight, type of diet (food composition), amount of caloric restriction, and level and type of physical activity (activities of daily living vs. moderate-intensity aerobic exercise, vs. high-intensity interval training, vs. strength training).

Also, as a person loses body weight, loss of lean tissue causes a drop in the metabolic rate and the lower overall body mass (muscle and fat) requires fewer calories to sustain the human body.

Furthermore, due to genetic factors, two people with similar measured caloric intake and output seldom lose weight at the same rate. Most people on a negative caloric intake experience much faster weight loss rate in the initial stages of the diet.

Research looking at the energy content of weight loss found that during the first four weeks of a diet, a deficit of only 2200 calories led to each pound of weight lost.

At week 6, the energy reduction to lose a pound of body weight had increased to about 2750 calories.

By week 20, the required deficit was closer to 3500 calories per pound of weight lost.

Studies have also confirmed that as people diet and lose weight, they have a natural tendency to be less active. Thus, it becomes a greater challenge to stay with the diet, most notably due to the lower caloric intake, the difference in daily physical activity, and the drop in the basal metabolic rate. This can be discouraging, but by setting realistic expectations, being patient and combining physical activity with eating less, you can be successful.

As you lose weight your body will burn fewer calories because the energy cost to move a smaller body is much lower. While not a precise science, the 3500-calorie weight loss rule is still a good guideline to work from when writing weight-loss programs.

The most common explanation for individual differences in weight loss and weight gain has been variation in human metabolism from one person to another. We are all familiar with people who can eat “all day long” and not gain an ounce of weight, while others cannot even “dream about food” without gaining weight.

Because experts did not believe that human metabolism alone could account for such extreme differences, they developed other theories that might better explain these individual variations.

In terms of physical activity, all activity or movement a person does during the course of the day counts. This principle is known as “spontaneous non-exercise activity,” or “fidgeting.” Such activity can easily account for several hundred calories a day, resulting in significant differences in weight management among people.

There are many myths when it comes lo fat loss that could be preventing you from reaching your health and performance goals. Here’s the truth about one of the most common weight loss myths: “3500-calories weight loss rule”. If an extra 3500 calories is equivalent to one pound of excess body weight, then a 3500 calorie deficit must equate to weight loss. Decreasing 500 calories per day (by consuming 300 calories less and using up 200 calories through moderate intensity exercise, e.g., 20 minutes of aerobic activity) for one week would initiate weight loss. However, it’s very likely that you’ll lose much less that 1 lb of fat as the weeks go by.

This fits with what many people experience when they try to lose weight – losing the first couple of pounds may be easy, but sooner or later, weight loss plateaus. At that point many give up because they think they are doing something wrong. Instead, you need to proceed further with your diet and exercise plan taking into account that these humble results are simply a natural thing affecting everyone.