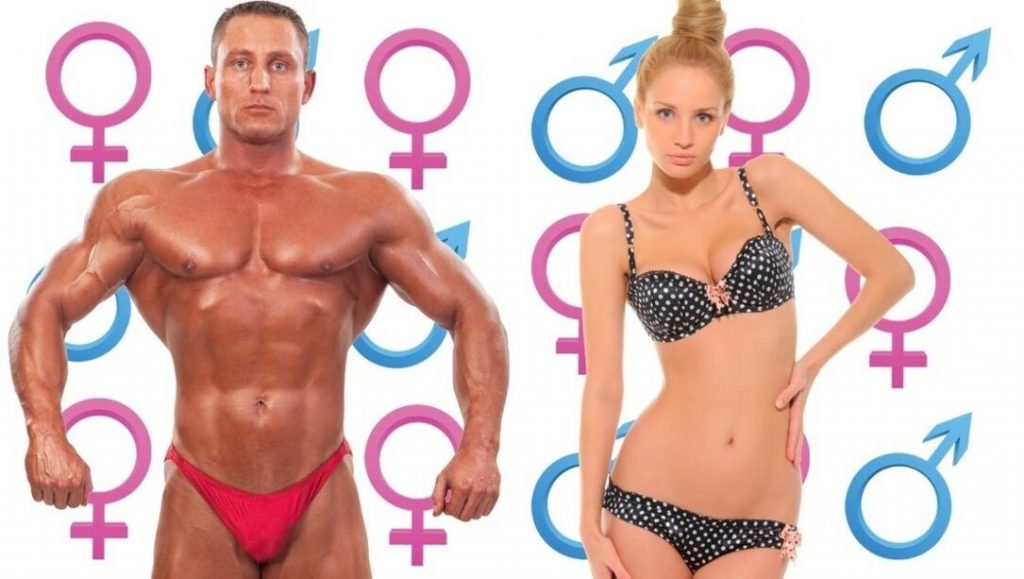 Anatomical differences between male and female bodies do exist and are worth noting. In general, males typically have proportionately more muscle mass, more bone mass, and a lower percentage of body fat than women. In this article you’ll find numerous anatomical differences between men’s and women’s bodies. You will also find the answer to the question of whether men and women should have a different approach to strength training due to the many anatomical and hormonal differences or they should all follow the same principles of strength training.

Female bones are all smaller, lighter, and of a more delicate appearance with the joints that are less in size. These male-female distinctions are visible in nearly every bone of the body, so it is no wonder that forensic scientists can often accurately determine the sex of human remains using just a few bones.

Perhaps the most obvious of the many structural differences between the male and female skeletons are in the pelvic girdle or pelvis—the ring formed by the two pelvic (coxal) bones and sacrum.

Due to the greater width of the female pelvis compared with the male pelvis, the angle between femur and tibia is generally greater for women than for men. This causes a more lateral force as the quadriceps extend the knee which may pull the patella outwards. This is clearly a disadvantage when force of knee and hip extension is required and highlights the high injury potential not only at knee and hip, but at the junction of sacrum and ilium, and pubic symphysis which are less stable in women than in men, particularly in the two or three days premenstruation.

Although the head of the female femur is approximately 30 per cent smaller than in the male, affording some degree of extra mobility, stability in the joint is not compromised; nor is there greater stress in the female hip joint due to the support of the fibrocartilaginous rim (acetabular laborum) that lines the socket (acetabulum) into which the head of the femur fits, plus the strength of the transverse acetabular ligaments.

The female shoulders are also narrower than in men and the lateral angle of radius/ulna on humerus is greater, providing a weaker force application potential in ‘pulling’ and ‘pushing’ activities. The length of the female spine is approximately 86 per cent that of the male spine and this, combined with a greater distribution of weight towards hips/thighs, gives women a relatively lower centre of gravity and therefore an advantage where potential stability and/or balance is required.

The amount and location of muscle tissue strongly affect potentials for gaining strength, as do the muscle fiber type and the quantity of muscle fibers that one is born with.

Men appear more muscular simply because their individual muscle fibers are larger than those in women, but the quantity of fibers does not appear to significantly differ.

Most studies have not found any major gender differences in type I (slow-twitch) and type II (fast-twitch) muscle fiber distributions. When comparing fiber area, men appear to have larger slow and fast twitch muscle fibers than women.

Athletes of both genders participating in the same sport (ie, male and female powerlifters or male and female sprinters) seem to have similar muscle fiber compositions, but two studies have shown that men may have a greater fast-twitch /slow-twitch fiber area ratio. It’s easy to demonstrate that all the muscle fiber types (types I, IIA, IIAB, and IIB) can hypertrophy similarly in both sexes, assuming that the exercise stimulus and intensity are sufficient.

Differences in strength gains between men and women seem not to be affected by muscle fiber type or adaptation but rather by cross-sectional area and muscle fiber number. Unit for unit, female muscle tissue does not differ from a male in potentials for force development.

Strength is defined as the maximal force that can be exerted by a muscle or group of muscles and as a quantitative measure can be looked at in two different ways. Absolute strength is simply the amount of weight that one can lift (ie, 30 kg) and is usually how we speak of our individual strength. Relative strength relates this 30 kg to an individual’s muscle mass (ie. 50 kg of lean muscle mass can lift 30 kg).

Men appear to demonstrate larger absolute increases in strength and degree of muscle hypertrophy than women when both undergo identical weight training regimens. In general, muscular strength in adult women is about two-thirds that in men, although there is large individual variability depending on body size and muscle mass as well as the muscle group measured, fiber type, and individual fitness level.

Over time, women and men make the same relative gains in muscular hypertrophy after a resistance training program.

Sex differences in muscular strength also depend on the body segment and muscle groups compared. Muscular strength in females is closer to that of males in the lower body than in the upper body. For example, chest and arm strength relative to body weight in females is about 50% to 60% of that in males; in contrast, strength of the hip flexors and extensors relative to body weight is similar in males and females.

These differences by body segment are probably due to two factors: first, anatomical differences such as wider shoulders and longer arms, and proportionately more total muscle mass in the upper body, in men, and second, the traditional tendency on the part of men to participate in sport and activities of daily living that train the upper body.

Because muscle cross-sectional area (muscle fiber size multiplied by the number of muscle fibers) is directly related to the ability to produce force, individuals who have larger muscles are able to lift more weight. When comparing strength to lean body mass (body weight without fat) or cross-sectional area, women are about equal to men and are just as capable of developing strength relative to total muscle mass.

The ability of a muscle to produce force is independent of gender. A 15-cm2 cross-sectional area of an elbow flexor muscle can produce about 19 kg of a force for both men and women. In other words, strength per gram of muscle is similar between men and women.

Hormonal differences between men and women

The two main sex hormones that are incredibly different in men and women are estrogen and testosterone. Estrogen is the primary female sex hormone. Even though estrogen might assist in recovery from exercise when considering muscle damage, it doesn’t have any effect on muscle fiber size.

Men, on the other hand, have much higher androgen levels (greater levels of testosterone) than women, which could suggest why women experience less change in muscle size with hypertrophy-oriented training. That’s why weight training will not leave them resembling a female Arnold Schwarzenegger.

Since lower testosterone levels and muscular composition will limit the muscle bulk they will gain, there’s no reason why women should avoid lifting heavy weights and stick with dumbbells so light they barely break a sweat.

Other hormonal differences between men and women certainly exist and do play a role in exercise adaptations, especially when considering body composition, but this will be the subject of another article.

When creating a strength routine, the American Council on Exercise recommends the same guidelines for men and women. Although there are numerous differences between men’s and women’s bodies, our muscle tissue is actually identical and these differences don’t impact the ability to perform certain types of training. Men and women both have incredible potential to grow with resistance training. Therefore, no exercise or training method is off-limits to ladies, unless they’re injured or it doesn’t work for them structurally.