Arnold press increases the range of motion of the dumbbell overhead shoulder press by placing the dumbbells in front of your shoulders in the starting position, placing more emphasis on the aterior (front) head of the deltoid and upper chest. Given that Arnold is considered to have the best chest and shoulder development in the history of bodybuilding, this is definitely a move worth incorporating into your workouts.

INITIAL (STARTING) POSITION: Sit on a flat bench (or low-back seat) keeping the back straight. With elbows bent and pointing forward, hold the dumbbell at shoulder level with an underhand grip (thumbs pointing away from each other/palms facing you). The starting position should look like the contracted portion of a dumbbell biceps curl. 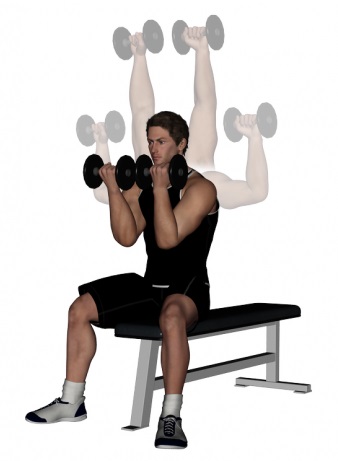 EXERCISE EXECUTION (MOVEMENT): Press the dumbbells vertically (overhead) while rotating your wrists so that your palms are oriented forward at the top (thumbs pointing toward each other). In other words, you will end at the top in a conventional press. Don’t lock your elbows at the top. When you lower the dumbbells, rotate your wrists back so that your palms are oriented inward again. For variety, you can lower the dumbbells to your chest instead of stopping at your shoulders. This increases the range of motion and works the delts in a slightly different way.

Alter the exercise either by:

Arnold press solicits the deltoid, mainly the anterior (front) deltoid, as well as the clavicular head of the pectoralis major, triceps brachii, trapezius, and serratus anterior.

You can replace Arnold dumbbell press with any other front deltoid exercise that generates shoulder pressing movement.

It’s best done while seated for greater upper body stability (you can seat against a backrest to help prevent an excessive arch in the back). In theory, this exercise was invented to work all three areas of the deltoid, although in practice the front and side work harder. The main advantage is that it is not as hard on the ligaments and small muscles surrounding the shoulder joint, although further research is needed to confirm this.