Barbell upright row is a compound exercise, meaning it uses multiple joints, and must be done with proper form to prevent injury. To emphasize the trapezius (not the deltoid), raise the bar close to your body during the exercise and pull the bar vertically upward until it reaches your chin, raising the elbows as high as possible. Only if the elbows are raised above shoulder level, the trapezius takes over the work. The upright row demands good form if you are to avoid back and shoulder injury, and it should be avoided if you have a history of shoulder pain. Many athletes choose to perform the upright row with an EZ bar as it offers a more comfortable grip.

STARTING POSITION (SETUP): Stand holding a barbell in front of you using an overhand shoulder-width (or a little less) grip and your arms extended against your thighs. Bend your knees slightly. Your feet should be slightly apart. This is your starting position. 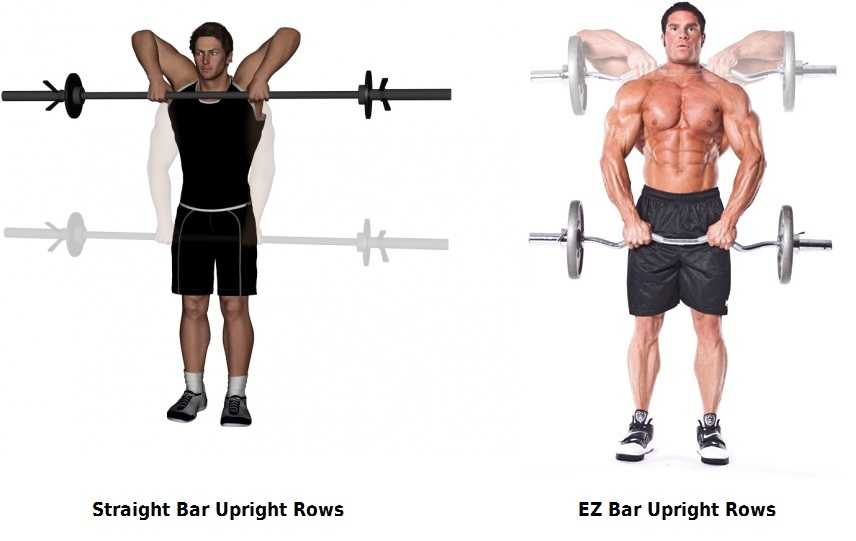 ACTION (MOVEMENT): Keeping your body straight and stationary, pull the bar vertically upward towards your chin in a smooth motion. Lift it close to your body, keeping your elbows high and over the bar. Keep your back tight and upright. Lower the weight under control — don’t let it drop — to full elbow extension. Breathe in as you begin to raise the barbell and out as you lower it.

This trapezius exercise belongs in the multiple-joint exercise category because the shoulder, elbow, and wrist joints are mobilized. As a result, the upright row recruits many muscles in addition to the shoulders: the upper trapezius, biceps, and forearms.

The exercise can also be performed on a cable machine, using a short, straight bar attached to the low pulley. You can also use the resistance band instead of free weights.

Barbell upright row is a good heavy exercise for the deltoid (for the lateral head in particular), as well as the trapezius to a lesser extent. It works trapezius only if you bring your hands closer in a narrow grip, if you raise the bar close to your body and up to your chin level). Using a shoulder-width grip (or wider) places more emphasis on the deltoids, less on the trapezius. So you should avoid this variation if your goal is to hit the trapezius. To sum up, although when done properly, this is a good exercise, it is not specific to the trapezius. Beginners can do it without difficulty if they are shown how.

Well-developed traps provide a clear center line to your back that highlights broad lats on either side. Your traps must be well-defined and distinctly separate from your lats.