The Anatomy of the Shoulder Muscles

The shoulder is a ball-and-socket joint between the humerus bone of the upper arm and the scapula bone (shoulder blade). Shoulders provide the foundation for the sharp V shape that marks a top bodybuilder—a wide upper body narrowing to a small waist. Thick shoulders create the illusion of a smaller waist, producing the coveted V taper. Some people are born with fairly wide shoulders, while others have to work extremely hard to achieve them.

The shoulders are an incredibly complex network of joints, bones, nerves, and muscles. The anatomy of the shoulder gives it the greatest range of motion of any joint in the body. At the same time, the complexity of this joint makes it highly prone to injuries, such as nerve impingement or shoulder dislocation.

The Anatomy of the Deltoid Muscle

The shoulder muscles are called deltoids, or “delts” (named after the Greek letter delta, which is shaped like an equilateral triangle). The deltoid muscle group forms the cap over the shoulder joint. The deltoid is considered one muscle, but it has three distinct parts, or heads. They are large, rounded muscles at the ends of our shoulder bones. Delts lie just above the triceps—the top arm muscles—and tie into the chest muscles (pecs). Delts also join the trapezius muscles (traps) of the upper back.

Anatomical and functional segments of the deltoid muscle

The deltoids are actually three distinct muscles (heads) with three different functions: (a) the anterior deltoid toward the front, (b) the lateral deltoid in the middle, and (c) the posterior (rear) deltoid toward the back. From a broad tendon attachment above the shoulder joint, the deltoid’s three heads merge into a single tendon that attaches to the humerus bone of the upper arm. The anterior and lateral heads originate on the collar bone, while the posterior head originates on the scapula. All three heads must be fully developed for the shoulders to be considered outstanding. When you get lean enough, you’ll be able to see the three heads contracting while you train. 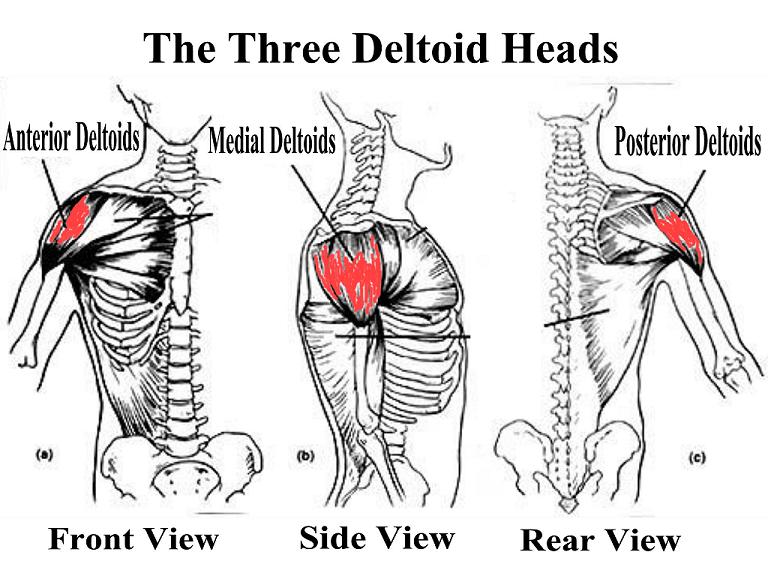 The Anatomy of the Deltoid Muscle

The function of the deltoid muscle

The function of the deltoid muscle is essentially to move the arm away from the body. Individually:

The trapezius is responsible for raising your shoulder, rotating the shoulder blades, and turning your head. These muscle groups are so closely related that a lot of the same exercise work for both, at least to some extent. Save the deltoids and traps for the shoulders day, as they are technically part of the shoulder anyway.

The deltoids work in concert with the rotator cuff, a collective name that describes four small, deep muscles that hold the shoulders in place. These muscles allow the arm to rotate at the shoulder. Despite being a barely visible muscle group, the rotator cuff is essential for shoulder stability and strength. All four muscles originate from the scapula (shoulder blade) and pass across the shoulder joint to attach onto the humerus bone of the upper arm. 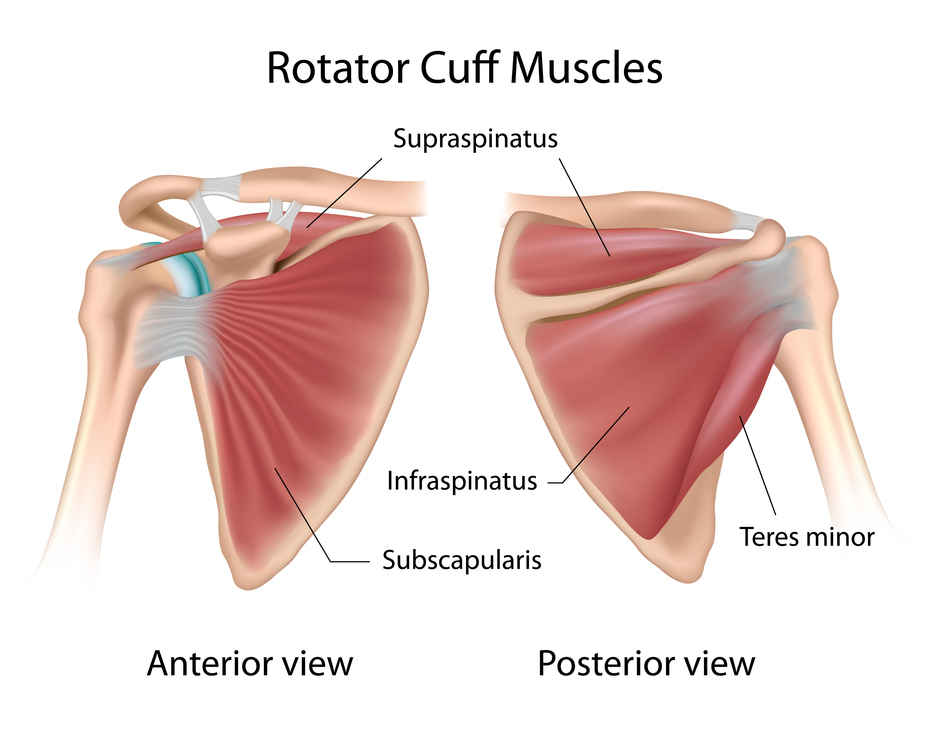 Anatomy of the Rotator Cuff

Different parts of the deltoids come into play when you do chest exercises (pushing movements) or back exercise (pulling movements). In fact, it’s hard to think of any upper-body movement -everything from loading weights plates onto a bar to raising your arm- that doesn’t bring these muscle into play.

The entire deltoid area must be developed so that it’s clearly separate from the pecs and traps. Again, definition is a key part of bodybuilding. Some people naturally have greater separation between their delts and surrounding muscles, whereas others have to work harder to achieve it.

Deltoid exercise are broken down into the three main types: (a) overhead presses, (b) upright rows, and (c) raises. Some shoulder exercises work all three parts of the deltoid in varying degrees, but most exercises target one head more than the others. With presses, you lift weight directly over your head. Presses involve all three heads of the delt. With raises, you lift the weight in a wide arc to the front, side, or back of your body.

Table below provides a list of exercises that target the muscles of the shoulder.