Cable shrug exercise is very similar to the basic exercise – dumbbell shrug. Instead of dumbbells, grasp a cable bar attachment that is attached to a low pulley and hold a bar in front of your waist or behind your back. The principles and movements are almost the same as in the basic exercise and the main reason to change is to break up your routine and add a little variety. At the same time, you will benefit from certain minor differences in the angles of the workout. However, dumbbells are the best fit for a natural grip.

STARTING POSITION (SETUP): With feet shoulder-width apart, stand in front of a low-pulley cable while holding a straight bar attached to the low pulley. 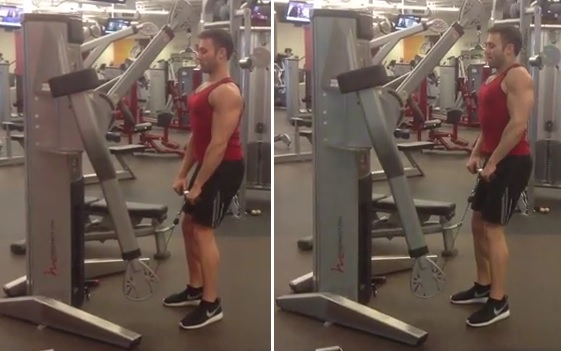 MOVEMENT (ACTION): Slowly shrug your shoulders up toward your ears as high as possible (but don’t roll them back). At the top, pause for a moment and contract hard through your traps before slowly lowering the bar back to the starting position.

Shrugs are by far the best trapezius builder. Make them a regular part of your training and you will have traps that give the Incredible Hulk pause. Besides traps, your forearms, hamstrings, lower back and rear delts will be indirectly stimulated.

To add variety to your trapezius workout, replace the cable shrug with a different exercise that works the same muscles (trapezius, levator scapulae). Use the barbell, dumbbells, or even a gym machine to perform the shrugging motion without the cable.

Here is the list of the most important trapezius exercises:

The inclusion of the cable shrug in your training routines is highly recommended. Cables provide many benefits over dumbbells and barbells: you’re able to maintain steady, constant tension throughout the entire exercise (range of motion). During a free-weight exercises, the resistance is very uneven over the range of motion.

Cable shrug is a very good heavy exercise, strictly for the trapezius and levator scapulae muscles. The workout is highly specific and effective for the upper part of the trapezius and adjacent muscles. It is also very simple and suitable for all levels. Beginners will notice rapid progress in the amount of weight they can lift.

Overly developed upper traps (trapezius muscles) are not aesthetically pleasing on women. Therefore, women are counseled to avoid exercises such as shrugs, which directly stimulate the upper part of the trapezius.