Cable upright row is identical to the barbell upright row and most of the same comments apply. You will require a cable station to do this exercise. Using a straight bar attached to a low pulley of a cable machine provides a steady resistance throughout the movement. To emphasize the trapezius (not the deltoid), raise the bar close to your body during the exercise and pull the bar vertically upward until it reaches your chin, raising the elbows as high as possible. Only if the elbows are raised above shoulder level, the trapezius takes over the work.

How To Perform Cable Upright Row

STARTING POSITION (SETUP): Attach a straight bar to a low pulley cable. Stand with your feet slightly apart, your torso straight and held firmly in place. Hold the bar in front of your thighs in an overhand grip (palms facing your legs) with your hands a little less than shoulder-width apart. Begin with your arms extended toward the floor and your knees slightly bent.

ACTION (EXECUTION): Pull the bar up to your chin (until it almost touches it), keeping it close to your body throughout the movement (not illustrated here). The elbows should rise and remain higher than your hands. Breathe in as you begin to raise the bar and exhale as you lower it. Hold for a count at the top, then slowly return to the start position.

We’d probably replace upright rows with shrugs. Upright rows can be hell on your joints if done incorrectly and they usually are. If you’re looking to put some trapezius exercises into your training sessions, you might find the list below to help you reach your goals. 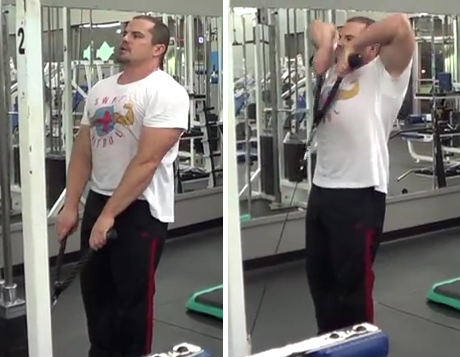 Shrugs are the main exercise aimed at developing the traps, but bodybuilders also use narrow-grip upright rows to hit this muscle. Using a low cable pulley for the upright row offers you a steadier and more stable resistance through the movement than is possible when working with a barbell. To hit the trapezius muscles always make sure that you stand close to the pulley and that you keep the bar tight to your body. Finally, use a close grip to preferentially work the upper back. Wider grip will engage your shoulders in the exercise.

Contrary to popular belief, this is not a specific trapezius exercise, although it does give the muscle a good workout. Most of the effort is made by the deltoid, however, and the arm movement is in fact almost identical to the dumbbell lateral raise except that you need to bend your elbows much more.

Both shoulder shrugs and upright rows work your trapezius, but upright rows also work your shoulders. So while upright rows work more muscles (they are multi-joint exercise), the shrug allows you to work a solitary muscle harder, as you can use far more weight when performing shrugs. For best results, combine both exercises in your exercise program but give advantage to shrugs. Trapezius exercises are important for shoulder stability and strength.