The Anatomy of the Calf Muscles

The primary muscles of the calves are the gastrocnemius, the soleus, and the anterior tibialis.

The gastrocnemius is the muscle that you see. A two-headed muscles that looks like a split salmon fillet on the back of your leg. It attaches to the heel with the Achilles tendon and originates behind the knee on the femur. Its job is to elevate the heel, a movement called plantar flexion. It’s composed of two sections—one on the inside of your leg, the other on the outside. These sections start just above your knee and come together at your Achilles tendon, which attaches to the back of your heel. 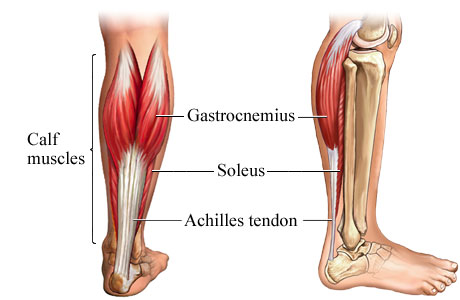 The Anatomy of the Calf Muscles

When you watch someone with well-developed calf muscles doing a heel-raise exercise, you can see the soleus from either the side or back. From the side it’s one of the thin strips of muscle between the gastrocnemius and the lower-leg bones. (The other strip is the peroneus longus, which has a small role in raising your heels.) From the back, it’s the strip of muscle on either side of the Achilles tendon, beneath the gastrocnemius.

It does the same job as the gastrocnemius: raising the heel. The only difference is that it works in a different position, when your knee is bent.

Origin: fibula (head and superior and dorsal ends), tibia (soleal line) and tendinous arch of the soleus (between the fibular head and the tibia).
Insertion: calcaneus (posterior tuberosity)
Main functions: flexion of the sole of the foot (more isolated when the knee is flexed), flexion of the knee and supination of the foot.

Exercises to Isolate the Soleus Vs. the Gastrocnemius

The best exercise for working the soleus is the seated heel raise. For the gastrocnemius, good exercises include standing heel raises and donkey calf raises. So besides calf raises, any exercise that features some level of ankle extension—such as the squats or jumping movements—also work your calf muscles. 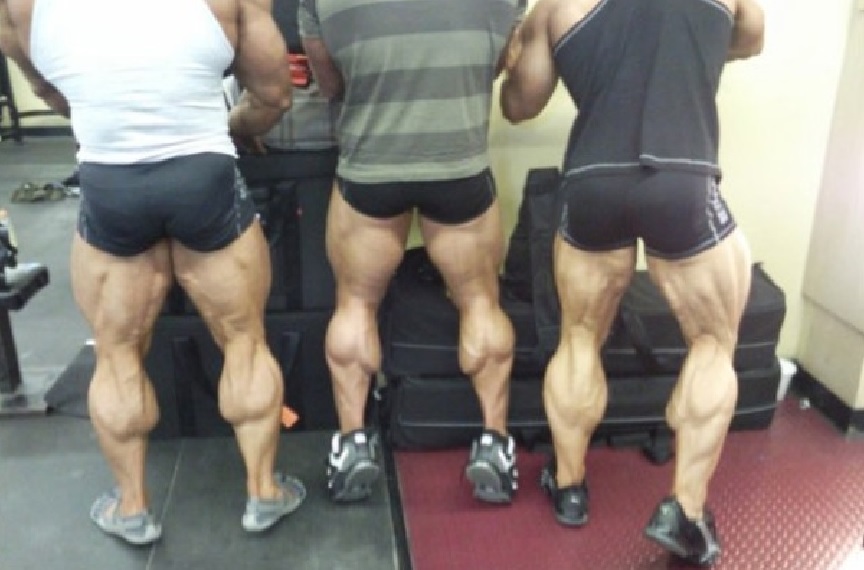 Finally, there’s the anterior tibialis, a small muscle group on the front side of your lower leg. It originates on the tibia and attaches to the top of your foot. Its main function is flexing the foot upward. Walking works this muscle; many hard-core walkers experience shin pain when they increase their speed or distance. Forefoot raises will help keep the anterior tibialis in top shape.

Some Interesting Facts About Calf Muscles

The gastrocnemius and soleus combine at the bottom to form the Achilles tendon, which attaches to the heel. This explains why the two muscles generally work together in such exercises as the standing calf raise. When you do a seated calf raise, with your knees bent 90 degrees, you isolate the soleus.

Of course, the calves contain one of those muscle groups that may actually develop better in response to real-life activities than to formal exercise. You can find runners who have better-looking calves than many bodybuilders. And among guys who lift heavy weights, you’ll see plenty who have meaty calves even though they don’t do any specific calf exercises. That’s because all lower-body exercises force the calves to work.

Functionally, the calf muscles are involved in every form of bipedal locomotion, such as walking, running, and jumping. While your big lower-body muscles provide most of the thrusting power for these movements, the calves are the final booster rockets, pushing off from the ankle joints while the quads push off from your knees and your gluteals and hamstrings push from the hip joint.

Most people who are considered to have weak calves have a gastrocnemius that attaches high on the leg. To help camouflage this deficiency you should spend extra time working on the low calf muscles (called the soleus). By building this smaller muscle you can make it appear as if your calves are longer and fuller than they really are. The best exercise for this is the seated calf raise machine, but most calf exercises done with the knees bent will shift most of the stress from the upper to the lower calves.