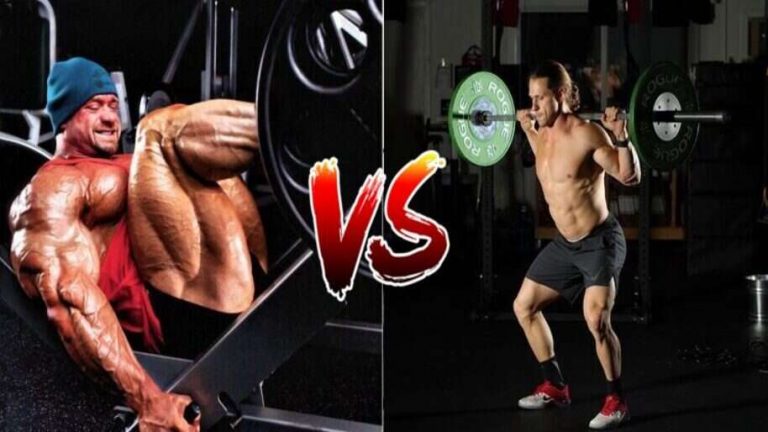 Barbell squats and leg presses are often the top two contenders in strength programs when it comes to lower body muscle and strength. But given a choice, should you do the leg press or the squat? Or both? If your goal is to build muscle and increase strength, both the squat and the leg press should have a place in your training program.

Some prefer to use only one of these two exercises, while others include both to cover any disadvantages that the exercises have when performed individually. This article will take a closer look at both exercises in an effort to help you decide when and why one exercise might be better than the other one. Simpler and more transparent comparison of squats and leg presses you’ll not be able to find anywhere else. So let’s start!

What are the differences between the squat and the leg press?

So what exactly is the difference between them? Both exercises activate the quadriceps in a similar way, but the squat also activates other muscle groups, including the hamstrings, glutes, core, and back muscles. This comes as no surprise because most of your body moves to perform squats.

The leg press is better at isolating the quadriceps, and the squat (especially the barbell back squat) hits multiple muscle groups at once. Which exercise you will choose depends on your goals and capabilities, but the general recommendation is to give priority to the squat because of the more advantages of the exercise itself.

One of the biggest differences between the leg press and the squat is the positioning of the weights. In a loaded barbell squat, you’ll be holding the weight on your back, on your delts, or over your head. The leg press machine is an exercise that requires you to push the weights that are below your feet.

The leg press is an exercise that is easier to master considering that it’s done on a device (machine-based, closed chain exercise) that has a given direction of movement and is quite easy to use. This means that you don’t have to think too much about your body position during the performance because the movement has a given scope and direction determined by the device.

On the other hand, the squat is a much more complex exercise (free-weight move; open chain exercise) that is more difficult to learn. The correct performance takes a long time to learn. Also, it is necessary to satisfy certain requirements of the body position in order to realize the full potential of the exercise. Stability and mobility of individual joints, coordination of the whole body, and a certain level of strength are factors that influence the correct performance of the squat.

Table of key differences between squat and leg presses

In the following, we will go over the advantages and disadvantages of both exercises, and compare muscle activation during the performance so that you have as much information as possible to decide which exercise to use in different situations.

Regardless of the complexity of the exercise, the squat is something that everyone with slightly more serious goals should master because it has many advantages that the leg press cannot replace.

Pros and cons of squatting

The squat is a multi-joint (compound) exercise that activates a number of muscle groups during the performance. In addition, it improves balance and coordination more than the leg press does. Performing squats does not require a large amount of equipment, and it is possible to adapt the exercise due to a large number of squat variants available. For example barbell back squat (main squat), front barbell squat, bodyweight squat, pistol squat, goblet squat, sumo squat, sissy squat, dumbbell squat, etc.

What is perhaps most important, the squat is an exercise that is used as one of the main movements in strengthening the lower extremities in most sports, and in our daily activities, we do the squat many times without even thinking about it.

Using heavy weights can also be a problem in terms of injuries. In order to protect yourself from potential injury you will need a spotter to assist you if needed, or you will need to do a cage squat that has safety bars which are not common in most gyms. There’s a risk of getting stuck at the bottom of a squat and not being able to get back up if you don’t use a spotter. You can also strain your shoulders if you’re supporting a heavy barbell (with or without the use of a spotter).

Advantages and disadvantages of the leg press

The leg press is performed on a device on which a person sits while pushing and lowering a platform loaded with weights with his legs. Traditionally, the leg press is used with a 90-degree angle at the hips (45-degree leg press). Therefore, your torso reclines at a 45-degree angle as you push the plate up and away from your body. This angle, combined with the solid back support, creates an incredibly strong position. Seated leg press machines, unlike angled or 45-degree leg press machines, have your back (mostly) vertically straight.

Considering that the upper part of the body is motionless during the performance, there is no great load on the spine with this exercise. This is a great advantage for all those who have problems in that area. In fact, we can freely say that this exercise is intended for them.

The simplicity of the performance makes it an excellent choice for beginners and people who have problems with squatting due to the length of their legs. The longer your femur is, the more your torso will have to pitch forward in order to keep the bar over the midfoot as you squat and stand back up. Hitting full depth for them will be more difficult than it is for short-legged athletes. They will for sure benefit more from strengthening their quadriceps by doing leg presses instead of squats. In addition to the above, this exercise is less exhausting than the squat due to its isolating character. Also, muscle recovery between sets and workouts is faster after performing the leg press compared to the squat.

In addition, it is possible to use heavier weights than when squatting. That way it will be much easier to achieve progressive loading and hypertrophy of the leg muscles, primarily the quadriceps. Finally, it should be noted that the leg press is a much safer movement (if performed correctly) than the squat because the device has a built-in safety mechanism (you don’t need a spotter).

The first and basic disadvantage of the leg press is also one of the advantages of this exercise, which is the isolation of the quadriceps muscles. If your goal is to activate several muscle groups at the same time, the leg press will not be a good choice. Also, due to the sitting position of the body during the exercise, the stabilizer muscles are not active because the body receives stability and support from the device.

Also, during the performance of the exercise, you will not be able to determine whether there are certain compensations of one leg in relation to the other, i.e. if one leg works more than the other, which can consequently lead to muscle imbalances and injuries. Given that it does not require too much stability, balance, or coordination, this exercise does not have a great positive transfer to sports and everyday situations.

Many people report dizziness and a feeling that they will faint after getting up from doing a set on a 45-degree leg press machine. Why? You’re positioned upside down. This causes the blood to go to your head due to gravity. At the same time, your leg muscles are being damaged, causing the need for blood in the legs. When you stand up, the blood in your head is in excess, and the legs need blood. Combine this with the fact that gravity will pull the blood to the legs and you get blood leaving your head very quickly, causing noticeable effects.

The squat as a multi-joint (compound) exercise activates several muscle groups: quadriceps, hamstring muscles, glutes, adductors, calves, core, and back muscles, while the leg press (as an isolation exercise) primarily activates the quadriceps. However, variations in the position of the feet on the platform on the leg press should also be taken into account.

Research from 2001 dealt with the comparison of muscle activation between squats and leg presses and how the position of the feet (leg press variants) affects the activation of different muscle groups. The results showed that the squat activates the quadriceps and the hamstrings better than any variant of the leg press.

A comparison of different variants of the leg press showed that wide and high feet (compared to the platform) activate the hamstrings more. The activation of the quadriceps in all compared variants was equal.

Another study compared the levels of growth hormone and testosterone during the performance of the squat and leg press at similar loads. The results showed that higher levels of both hormones were recorded in the squat than in the leg press.

One of the reasons why we exercise is to gain muscle mass or lose fat tissue. Research from 2016 dealt with this very problem, and in addition to body composition, they also compared the strength and functional tasks (jumps and balance).

The subjects divided into three groups carried out the training program for 10 weeks. One group did the squat, the second the leg press, and the third both exercises together. The results showed that in terms of body composition, there are no significant differences between subjects of different groups, that is, it can be concluded that both the squat and the leg press are good choices if your goal is to increase muscle mass.

The choice of the exercise you will use will depend on many of the above factors, and it is up to you to use only one or both exercises according to your capabilities and training goals. Both the squat and the leg press will have an impact on increasing muscle mass and strength. The leg press will suit those with back pain and beginners who have not mastered the squat technique completely.

When we look at everything, the squat has more advantages and gives slightly better results than the leg press, so the advantage is slightly on the side of the squat, but the leg press is an exercise that should definitely not be excluded from the program. With research pointing to the fact that there are benefits to both free weights and leg machines, a combination of the two workouts may be just what you need to get a leg up on your fitness goals.