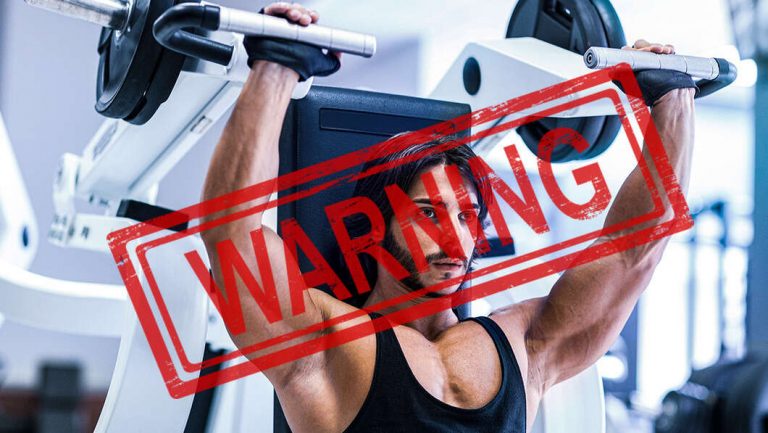 However, this battle makes no sense. They are comparing apples to oranges. Each piece of exercise equipment has its attributes and its drawbacks, and each is best suited to maximize a particular workout. The ultimate goal with both types of equipment is helping you reach yours.

Muscles are blind; they have no idea if you are lifting a free weight, working out on a machine, or walking outside and picking up a big rock. They contract, that’s all they do – they have no prejudice. Both free weights and machines use resistance in their function, but differ in how they operate.

However, some exercise machines (four of which we have discussed in the previous article) are indeed more dangerous than the others. This is especially true for some individuals (since we are all created differently) and if you’re not following guidelines. An injury can occur very quickly if a machine forces your joints into an unnatural range of motion too much.

On the other hand, for many people, even exercises performed on machines mentioned in this and previous article will work without an issue.

In this article, we continue to discuss those exercise machines that can be quite dangerous, and for which it’s not such a bad idea to abandon them completely.

Lat pulldown machine (behind the head only)

Another exercise machine that many people use incorrectly is the lat pull-down machine. Here we are talking only about one variation of the exercise – behind-the-neck lat pulldowns.

Going behind the head for both presses and pull-downs is something that was made popular a long time ago. Many bodybuilders around the time when Arnold was bodybuilding would go behind the neck to get some kind of additional benefits.

However, since then we’ve learned that there are no additional muscle-building benefits by going behind the neck. In fact, usually, when you press or pull behind the head you’ll have to lighten the weight load because your back and your shoulders are weaker in that position. By going in front of your head you should be able to lift significantly more weight which should provide a more effective muscle-building stimulus.

Aside from all that you are much more likely to damage your rotator cuff while pulling or pressing behind the head. The risk-to-reward ratio makes no sense. Simply stay in front of your head when doing lat pull-downs and military presses for better results with lower injury risk.

Another exercise machine you should probably stop or limit using is the seated crunch machine. A seated crunch machine will definitely target your abs however there are much better ab exercises available like stability ball crunches, decline sit-ups, and weighted leg raises with pulse ups, for example.

You begin this exercise with your core and torso already in a flexed position, with your legs locked behind the pads. This is a position that most Americans already spend much of their day in since most of us spend a lot of time seated and in a torso flex position.

If you continue to increase the weight load that you lift on this machine without strengthening those stabilizer muscles with other exercises first, you will highly increase your risk of injury to your spine.

Unlike hammer strength, you can only press both sides up at the same time. There is no unilateral option to train each side separately the way there is with the hammer strength machines. Also, the path of these old machines is very different and very bad for your joints.

If you were to do a chest press or a shoulder press with free weights you would notice that your presses don’t go straight up and down. Instead, they follow a more arc-like path on the way up. These old-school selectorized machines that you see in almost all gyms force your joints to move in a straight line which over time will irritate and most likely injure your shoulders.

There’s also no stabilization component involved in these exercises. While your external muscles like your chest, shoulders, and triceps get stronger, your deeper stabilizer muscles, like your rotator cuff, get very little stimulation. If you do something functional in real life or even a slightly more functional upper body exercise, let’s say the barbell bench press, even though your muscles can lift the weight, your rotator cuff could wind up with an injury.

Even worse, shoulder press and chest press machines are built with the premise that both your shoulders have the exact same mechanics. The odds that they do are about zero – one shoulder is usually a little wider than the other, if not torqued or twisted so it’s higher, lower, forward, or behind the other. Pushing a fixed bar through a fixed range of motion is ridiculously risky for most lifters.

The point is there are far better chest and shoulder press options like dumbbell presses, barbell presses, and even hammer strength equipment is a better option.

Finally, last but not least, is the butt blaster machine. This machine is mostly used by women but we’ve seen many men use it as well. Unfortunately, it’s not that great at targeting your glutes effectively. Most people already have inactive glutes from sitting in a chair all day. When people use this machine, especially beginners, they’re much more likely to target their already tight and overworked hamstrings rather than their glutes.

We’ve also noticed that many people use this machine thinking it’s safer than doing regular squats. However, you’ll get far better results for your glutes by focusing on perfecting your form and then upping your weight with exercises like barbell squats and dumbbell lunges.

Those are the eight machines (four of which we have discussed in the previous article) that we recommend you’re at least being careful with. We did want to mention other exercises you should not be doing, like upright rows, but upright rows are usually done with a barbell rather than a machine so we left it out.

There are other machines that aren’t worth your time, but these eight are the ones that we felt are most important to warn you about.

Keep in mind that some of these exercises may work for you without an issue. Everyone’s limb lengths and physical attributes are at least slightly different. If an exercise doesn’t bother you, feel free to continue doing it. However, that still doesn’t change the fact that we strongly believe there are better, more effective, and safer alternatives to all the exercises discussed in this article.