Exercise produces a stress on the body. The body responds to the stress of exercise or physical activity in a variety of ways. Some of these responses are immediate and are often referred to as the acute responses to exercise, such as an increase in body temperature and heart rate. Others are long term, often referred to as chronic responses or adaptations, and contribute to improved fitness for sport participation and reduced health risk.

Here are the 3 most important effects of training on the respiratory system.

Exercise results in an increase in the rate and depth of breathing. This will increase greatly, up to three times the resting rate. During exercise your muscles demand more oxygen and the corresponding increase in carbon dioxide production stimulates faster and deeper breathing. The capillary network surrounding the alveoli expands, increasing blood flow to the lungs. The breathing (also called pulmonary ventilation) becomes noisier and more obvious and the rate can raise so high that you are literally gasping for breath.

VO2 or oxygen uptake is the amount of oxygen which we take inside the body from ambient air in each minute at rest. It is around 200-300 ml/min. During strenuous exercise oxygen uptake increases to 3.5 lit/min for ordinary person and 4.5 lit/min for well trained athlete.

The mechanism behind this is quite simple and intuitive. The body needs more oxygen so the uptake has to increase to cater for this. In simple terms, the more activity you do, the more oxygen you need, but this can only go up to certain maximum levels. When you are at your limit you have achieved your VO2 maximum.

The lungs, at different stages of breathing, have varying amounts of air in them. Tidal volume is simply the amount of air which we inhale or exhale during quiet breathing. It is around 500 ml. During exercise, this tidal volume increases. Depending on intensity it may be 1500-2000 ml for ordinary person and for well trained athlete it may be increased to 2500 ml. Therefore, it is called ‘forced breathing’.

Tidal volume is elevated by both aerobic and anaerobic exercise. During exercise oxygen is depleted from the body, triggering a deeper tidal volume to compensate.

During exercise due to rapid movement of diaphragm and intercostal muscles total area of lung expands to accommodate more exchange of gases. 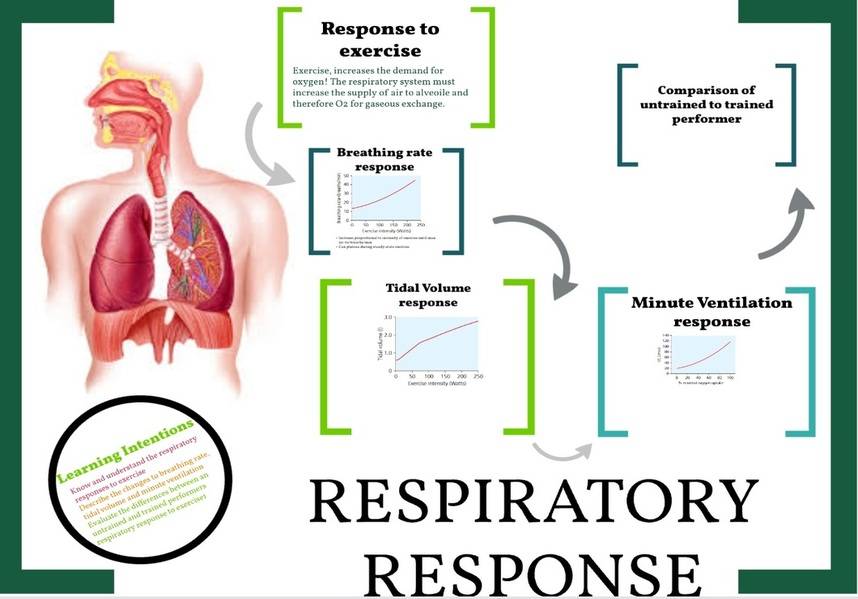 LONG-TERM EFFECTS OF TRAINING ON THE RESPIRATORY SYSTEM

Vital capacity is the largest amount or volume of air that can be exhaled (breathed out) after the largest possible inhalation (breath in).

Vital capacity increases in response to physical training to provide an increased and more efficient supply of oxygen to working muscles. During strenuous exercise, oxygen diffusion may increase by as much as three times above the resting level.

For a healthy adult male it is around 4.8 lit and for women 3.1 lit. The athletes who are under training for a long period may increase vital capacity to around 6 lit. Good reward, right?

Intercostal muscles are several groups of muscles that run between the ribs, and help form and move the chest wall. These muscles are mainly involved in the mechanical aspect of breathing.

The muscles of the diaphragm and intercostals increase in strength, allowing for greater expansion of the chest cavity.

An athlete’s total efficiency of the lung remain at higher level than the non-athletes. This efficiency is the key factor for higher rate of oxygen uptake than non-athletes.

Regardless of the exercise, never hold your breath when strength training. Holding your breath may cause excessive internal pressure that restricts blood flow, resulting in lightheadedness and high blood pressure responses. Prevent these undesirable occurrences by breathing continuously during every exercise set. Exhale during the more difficult lifting, pushing, or pulling phase, sometimes referred to as the sticking point and inhale during the easier lowering or return phase of each repetition.

Exhaling during the most difficult phase of a repetition and inhaling afterward will help maintain a more desirable internal pressure response. Because continuous breathing is a critical component of safe strength training exercise, practice proper breathing on every repetition.

Closing thoughts: Response of the Respiratory System to Exercise

Exercise is the most influential physiological stress on breathing. There are some immediate changes that occur during exercise program. Also, there are some relatively permanent changes following long-term physical training, the magnitude of changes being dependent on type, intensity and duration of exercise.

Aerobic fitness, anaerobic fitness and muscular endurance training place larger demands on the lungs than any other types of training. Over time these demands result in adaptations to the respiratory system such as: increased lung capacity (volume), improved exchange of oxygen and carbon dioxide, increased number of capillaries and alveoli in the lungs, improved strength and endurance of the diaphragm and intercostal muscles, increased vital capacity, etc.

People living with lung disease can and should get regular exercise for all the same reasons as everyone else. Your lungs and heart stay stronger, you are better able to perform the tasks of daily living and you feel better in mind and body. But if you already are dealing shortness of breath, it can be intimidating to think about increasing your physical activity. It is important to work with your healthcare team to make a fitness plan that works for you.