Ephedra, also known as ma huang, is probably one of the most widely recognized nutritional supplements used for weight loss. Because of several safety concerns—hypertension, arrhythmias, heart attack, stroke, and even death—the U.S. Food and Drug Administration (FDA) removed ephedra products from the U.S. market in 2004 because the risk of its use was deemed greater than its benefits for weight loss.

Ephedra (also known as Ma Huang) is a plant and is the source for most ephedrine products. Ephedra is derived from a shrub that is native to China (Ephedra sinica) and has been used for more than 5000 years as a natural treatment for asthma and other conditions. The ephedrine alkaloids present in the plant contain sympathomimetic compounds [i.e., central nervous system (CNS) stimulants] and are a source of ephedrine and pseudophedrine, which are used in many decongestants and cold medicines.

Ephedra vs. Ephedrine – What is the Difference?

On a very basic level, ephedra is a plant. This is a medicinal shrub-like herb that actually grows in many different parts of the world. This is also called the Ephedra sinica or Ma Huang plant. Ephedrine is the main active and effective ingredient found within the Ephedra sinica plant. The ephedrine is really responsible for all of the fat-burning and weight loss benefits that have been associated with ephedra and ephedra – based supplements.

Stacking is when two or more supplements are combined together in an effort to increase results. It’s a case of the whole being greater than the sum of its parts.

What is ECA stack?

In an effort to maximize fat burning, ephedrine has been used in combination with caffeine and aspirin, which is often referred to as an ECA stack. It is believed that when these three compounds are taken together (recommended ratio; 60 mg ephedrine, 200 mg caffeine, 300 mg aspirin), it results in an even greater thermogenic effect than that of ephedra alone and may be more effective for inducing weight loss.

Besides burning fat and increasing metabolism, the ECA stack preserves muscle tissue and suppresses the appetite. It is an ideal supplement for bodybuilders trying to get contest ready or just trying to get leaner. It can also improve athletic performance. 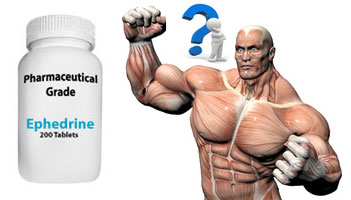 Ephedra reduces appetite and stimulates fat metabolism, making it very effective as weight-loss supplement. That is not open to debate.

Ephedra has been touted as a powerful fat-loss supplement, with more than 50 studies of its effects on body fat loss. Ephedra causes an average of 1.0 kg of body fat loss per month compared with placebo. There is scientific evidence to suggest that the combination of ephedra with caffeine and/or aspirin (or their herbal constituents) may indeed be more effective for inducing weight loss than ephedra alone.

No studies have shown that supplementation with ephedra improves strength, power, reaction time, speed, aerobic capacity, or anaerobic capacity, except for a few studies that combined ephedra and caffeine and found increased endurance.

Mechanisn of Action  (Ephedrine as a Thermogenic Substance)

So, in a nut shell, ephedrine is referred to as a beta-adrenergic agonist that works by mimicking the effects of the “fight or flight” hormones epinephrine and norepinephrine (i.e. adrenaline and noradrenaline).

It works (primarily) through the process of heating up your body. This is called thermogenesis. When you take ephedrine or ephedra pills, it prompts your body to start converting more fat stores into heat. It only does this in a moderate way that makes it still relatively safe for the user. But as you start to reasonably heat up, you need to break down more fat and glucose to deliver it to your cells. In this regard, ephedrine can promote fat loss even in a largely sedentary individual who may not be exercising regularly during the week.

A final way in which ephedrine is documented to work is by causing the user to eat less. This is again a noted effect that ephedrine shares in common with adrenalin. When adrenalin is released into your nervous system, it interferes with the neurotransmitters that can lead to over-eating. Studies have found that adrenalin suppresses your appetite by obstructing chemical transmissions that are sent by the stomach telling you to eat more.

Subjects consuming ephedra showed a wide variety of side effects:

Most of these adverse effects happen with great frequency at higher doses. Side effects of ephedra were minimized when subjects consumed less than 60 mg/day, and the adverse effects stopped after subjects discontinued ephedra use.

The FDA has reported 800 adverse incidents from ephedra use, although most of these events occurred when people consumed doses in excess of the recommended daily dose. There have been 284 serious adverse events, including 5 deaths, 5 heart attacks, 11 strokes, and 4 seizures.

Because ephedrine stimulates the central nervous system as well as metabolism, it is very dangerous for people who have heart problems or high blood pressure. They should avoid any ephedra, ephedrine, and ECA stack based supplements.

As of March 2004, ephedra – containing supplements were banned by the U.S. government. All companies marketing supplements based on the ECA stack either revised their formulas by excluding ephedrine and adding other ingredients or simply removed the supplement from their product lines.

Other fat-burning supplements have arrived on the marketplace. Because fat loss is a big business, not only for bodybuilders but also for the general public, many supplement companies are striving to find a fat-loss supplement that will create the results that the ECA stack did.

When the “ephedrine-free” hook is used, supplement companies just use an alternative stimulant source such as caffeine, caffeine-containing herbs or plants, synephrine, green tea, ginseng, or various combinations of such ingredients.

As a supplement, ephedra has a positive effect on fat loss, but there is no evidence that it can improve athletic performance. Recommended dosages of ephedra are between 25 and 120 mg, but side effects increase when daily amounts exceed 60 mg. Severe adverse reactions occur at an even higher rate when athletes exceed the recognized upper limit.  As of March 2004, ephedra – containing supplements were banned by the U.S. government.