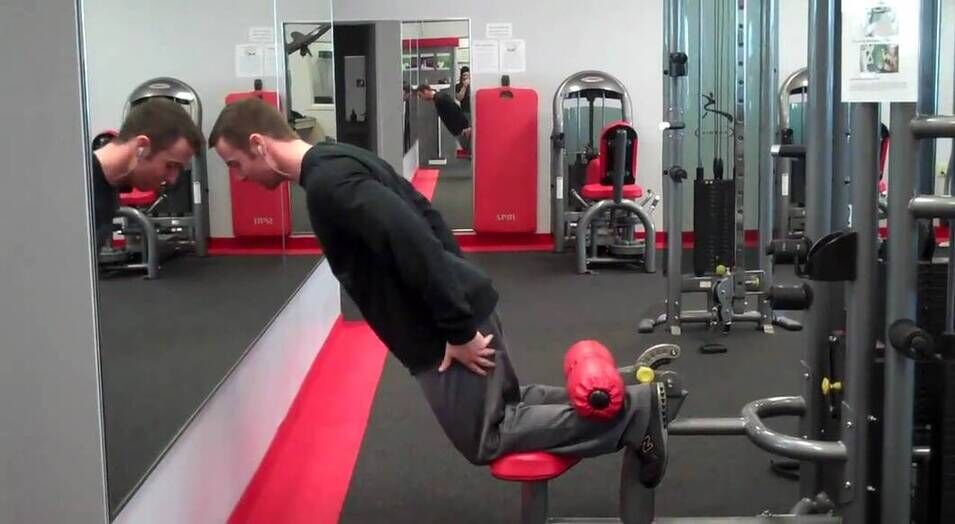 Hamstring rise or glute-ham raise is uncommon but useful hamstring exercise. It is suitable for advanced athletes only and will lend variety to your training sessions. Glute-ham raise is one of the best exercises for working the muscles of a football player’s buttocks, hamstring and lower back. Researchers discovered that men who add the glute-ham raise to their workouts suffer fewer hamstring strains than men who don’t perform the move. You can hold a weight between your hands to increase intensity.

STARTING POSITION: Kneel on a flat ab bench with your heels under the rollers (or get a partner to sit on your heels), hands crossed in front of your chest, and your knees bent at 90 degrees (create a 90-degree angle with your upper and lower leg).

ACTION: Slowly lower your upper body toward the floor with your hands out in front of you. Resist your body weight by eccentrically contracting your hamstrings. Once your hands hit the floor, push yourself back up to the starting position.

The glute-ham bench is hard to find in commercial gyms.

SETUP: Set up the glute-ham raise bench so that your feet are as far away from the pad as possible while your knees are still in contact with it so that you do not slide down. Start in the upright position, where your thighs and torso are in alignment and perpendicular to the floor (a). If adding weight, hold it close to your torso.

MOVEMENT: Keeping your hips engaged so that your thighs and torso stay in a straight line, allow your body to move forward and then downward, pushing yourself away from the bench and allowing the knees to extend. Once your torso is parallel to the floor and your knees can no longer extend, allow your hips to flex until your torso is upside down and perpendicular to the floor (b). Once you have reached this bottom position, reverse the action in a similar smoothly segmented fashion. First extend the hips until the body is parallel to the floor (c). Then flex the knees to bring the body back to the initial upright position, keeping the torso and thighs in line with each other (d).

Hamstrings (semimembranosus, semitendinosus and long head of the biceps femoris), gluteus maximus, (muscles of the lower back and along the spine).

This is a very difficult exercise. Begin with a limited range of motion and then work your way up to going all the way to the floor. For added safety and comfort, do this exercise on a mat. The glute-ham raise exercise develops the muscles in the following: (1) lower back, (2) gluteus maximus and (3) hamstrings all in one exercise.