The Jargon of Bodybuilding (Gym Slang)

Bodybuilders are a genuine subculture of the population. Consequently, they often use an idiom that, to outsiders, can sound as foreign as Caesar’s Latin. Terms such as reps, bi’s, tri’s, supersets, preexhaustion, forced reps, and negatives are common usage among devotees, but they can leave the initiate looking for  the nearest encyclopedia! Fortunately, the specialized vocabulary is not as intimidating as it may appear, and it’s not even necessary for the beginner to learn more than a quarter of it, since many terms in the jargon relate to more advanced techniques, those designed to add muscle mass to the seasoned physique.

The list of terms that follows will give you a good introduction to the jargon you’re likely to hear in the gym. This is the real language of bodybuilding. When you have a clear understanding of gym jargon, you should have no trouble standing up to the 300-pound, 6-foot-5 (135 kg, 195 cm) monster and asking for a spot or politely telling him to rack his weights. Then flex your tiny pistols and get back to work on making the perfect peak. 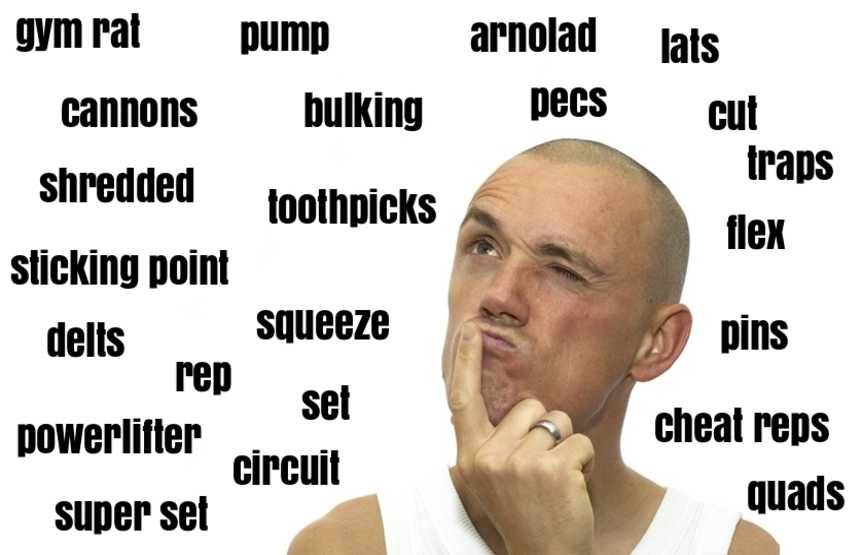 With a little bit of explanation, all the gym jargon will become that much more clearer.

Once you are a regular at the gym, you may hear many words that sound as if they are related to training, but the exact meaning may be unclear if you’re new to weight training. Welcome to gym jargon, a language started mostly by pumped-up behemoth bodybuilders and powerlifters that is now common in most gyms. Above in this post you will find some of the most important terms and expressions you’re likely to hear in the gym today.