Head-supported dumbbell rear deltoid raise is essentially the same as the basic exercise (bent-over dumbbell lateral raise), but you will support your forehead on the uppermost end of an incline exercise bench (facedown on an incline bench). Supporting your head restricts movement in the spine and prevents swinging the dumbbells upward with momentum. It is much easier to control proper form for this exercise while using the upright bench. It really works the back shoulders very effectively.

STARTING (INITIAL) POSITION: Stand behind an incline bench and bend forward at the waist until your head touches the top of the backrest (uppermost end of an incline bench). The backrest should be set at an appropriate height – for your torso to be almost parallel to the floor. Allow your arms to hang straight down from your shoulders. The palms of your hands should be facing each other (neutral grip) and your torso should be almost or fully parallel to the floor. This will be your starting position.

MOVEMENT (ACTION): With palms facing together, slowly lift the dumbbells up (to ear level; just above a horizontal line) and out to the sides of your body, pulling through the rear delts and rhomboids. Remember to keep your torso forward and stationary during the movement. The dumbbells should trace a semi-circle in a vertical plane. Squeeze your shoulder blades together at the end of the movement. After a brief pause at the top, slowly bring the dumbbells back to the starting position.

You can perform rear lateral raises standing, seated, or lying. Furthermore, you can do this exercise using underhand or even overhand grip.

While the neutral grip spreads the stress fairly evenly over your entire upper back, this underhand (supinated) grip variation puts more stress on your external rotators.

Switching to an overhand (pronated) grip shifts more work to your rear delts.

Replacement exercises are required when you do not have the necessary equipment, when you want a variation or if you cannot safely perform the recommended exercise. Try these other posterior deltoid exercises:

This exercise works the shoulder group, accenting the work of the posterior deltoid. 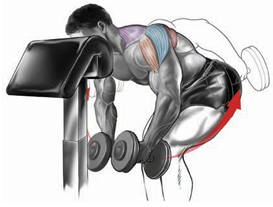 Head-supported dumbbell rear deltoid raise is a good isolation exercise that targets the back of the shoulder (rear deltoid muscle). It also works the trapezius muscles and the triceps.

Unfortunately, dumbbells have three main weaknesses when used for doing bent-over lateral raises: (1) not enough stretch (the arms stop once they are perpendicular to the ground; (2) a poor match between the muscle’s strength and the resistance provided by the dumbbells, and (3) limited range of motion (the range of motion is decreased because of the lack of resistance in the lengthened position, as well as the difficulty in lifting your arms).

That’s why we strongly recommend performing pulley raises. They seem to be more effective in building up the back of the shoulder when its development is delayed. The three weaknesses of dumbbells become the three strengths of the cable pulley.

Conclusively, this rear deltoid exercise is equally or even more effective as the standing bent-over dumbbell lateral raise, but it’s much safer for your lower back muscles.