High-intensity interval training (HIIT) has many benefits over low-intensity steady state cardio training. You may have heard of EPOC, or as it’s commonly known, the “afterburn” effect. Meaning, after a HIIT training session, your body continues to burn extra calories. In this post we’ll try to explain the story behind the process known as excess post-exercise oxygen consumption.

First of all: Why HIIT?! How HIIT effects your metabolism?

Why does this work? Exercise is like lighting a fire to your metabolism. When you are active, your metabolic flame and your caloric expenditure increases to varying degrees. With traditional, low- to moderate-intensity exercise—like walking on a treadmill or using an elliptical trainer for 30-90 minutes at a steady pace-you light the flame and it slowly increases to a gradual burn. When you end the workout, the flame dies down quickly and abruptly. Kind of like dumping water on it. 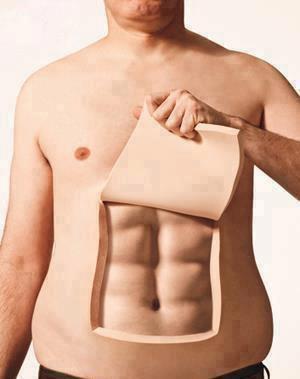 On the contrary, with HIIT, the high-intensity exercise creates a huge metabolic disturbance and the flame heats up rapidly. Each interval is like squirting lighter fluid on the fire. What’s more, after a HIIT workout, the flame gradually burns down and simmers for a long time. Have you ever lit a fire, let it burn all night, and found that the coals were still hot and glowing in the morning? That’s HIIT, and that’s the effect it has on your metabolism. It’s intense, and you continue burning calories even when the workout is complete. This is what we call excess post-exercise oxygen consumption, or EPOC. We will try to explain the mechanism behind this phenomenon.

HIIT is a fat-burning machine

Furthermore, HIIT is a powerful fat-burning machine. HIIT training has been demonstrated to reduce subcutaneous (aka stubborn and deep) abdominal fat, as well as reducing insulin resistance.

HIIT training also increases the size and amount of mitochondria in our cells. They are the real fat-burning fires of our metabolism.  In a 2007 study, seven sessions of HIIT over a 2-week period induced marked increases in whole body and skeletal muscle capacity for fatty acid oxidation during exercise in moderately active women. Each session consisted of 10 four-minute bouts at 90% of their VO2 max (maximal oxygen consumption), with two minutes of rest between intervals. These women were able to increase their body fat oxidation by 36% following their HIIT workouts.

Many HIIT training techniques also encourage core strength, which is beneficial for posture, balance, and preventing back ailments.

By spiking your heart rate up and then allowing it to come back down to a resting or recovery state before elevating it again, you are training your heart to work more efficiently. In doing so, you’re able to burn a high amount of calories fairly quickly. HIIT sessions of just 13 minutes can burn as many calories as a 40-minute low-intensity session, according to a January 2014 study by Medicine & Science in Sports & Exercise.

A major contributor to this phenomenon is called excess post-exercise oxygen consumption (EPOC). When you perform endurance cardio at a low to moderate intensity—let’s say a longer run—the calories expended during the workout are basically the total amount you can expect to burn from your efforts. After a HIIT work­out, you continue to burn more calories throughout the day. This is because your body keeps working to restore your preworkout oxygen levels.

How the “afterburn” effect actually works?

Ever wondered exactly why this works?

Excess post-exercise oxygen consumption is affected by the duration and intensity of the training load. In short, your body isn’t able to bring in enough oxygen during periods of hard work; therefore, you accumulate a “debt” of oxygen that must be repaid post-workout in order to get back to normal. The result-your metabolism is revved up for hours after you have done your workout.

In other words, after exercise your body must use increased oxygen to restore the body to a resting state by replenishing energy supplies and lowering tis­sue temperature. This means that in doing so, it’s burning more calo­ries than it was before the exercise was initiated. A pleasant surprise: you’re efficiently burning fat throughout the day, even while you’re working at your desk or lounging with your favorite TV show.

Splitting training sessions throughout the day increases EPOC even more, because instead of one, you’ll have multiple EPOC sessions. This is a huge advantage for those who aren’t able to complete a lon­ger workout in a single bout. Just split it up and reap the EPOC rewards. Another bonus: if you split up your workout, you may have more energy to work harder each time. Therefore, don’t fret if you don’t have a large time block during the day to devote to exercise.

The magnitude of EPOC

The higher the intensity of the workout, the greater the magnitude of EPOC.

There are two important factors in the afterburn equation:

They in turn depend on two variables in your workout:

The more intensely you work out over longer periods of time, the higher the elevation in oxygen consumption is and the longer that elevation lasts, extending afterburn benefits sometimes by a great margin. 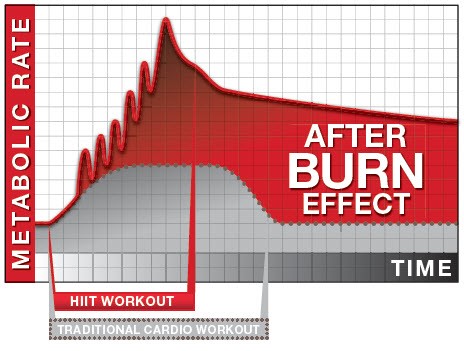 The duration of EPOC

Generally, it takes anywhere from fifteen minutes to forty-eight hours for the body to fully recover back to a resting state. That depends on what type of exercises or routines you do.

The real power of nutrition: HIIT won’t save you!

Cardio, especially a variety we recommend called high-intensity intenal cardio (HIIT), can increase your basal metabolic rate through what we call the “afterburn effect.” While that sounds fancy and is often used in sketchy marketing pitches for sketchy products, it’s simple: your body continues burning additional energy after you exercise.

But here’s the thing with cardio: if you don’t also eat correctly, HIIT won’t save you. Let’s say you’re trying to lose weight and have unwittingly eaten 600 calories more than your body has burned for the day. You go jogging for 30 minutes at night, which burns about 300 calories, with maybe another hundred calories burned from the “afterburn” effect. You’re still 200 calories over your expenditure, and that means no reduction in total fat stores for the day—and maybe even an increase.

You could continue like this for years and never get lean; instead, you could slowly get fatter. This is the most common reason why people simply “can’t lose weight no matter what they do.”

HIIT is cardio performed at such an intense level that your body will spend the rest of the day expending energy to recover from the rigorous training you gave it. This is commonly referred to as EPOC (excess post-exercise oxygen consumption). It means that you consume a great deal more oxygen recovering from the exercise bout than you would have if you’d just done a steady-state workout.

In other words, your body has to use more oxygen to fill its energy stores as well as to bring your body temperature, heart rate, and hormone and oxygen levels back to normal. All that extra effort takes energy, which is why your body burns calories at a higher overall rate long after you exercise.

You will be burning up to nine times more fat while sitting on the couch later that night than you would have if you’d spent an hour on the treadmill at a moderate pace. This type of training is far superior to steady-state exercises when it comes to increasing your VO2 max, which is the maximum amount of oxygen you can uptake during exercise. If your goal is to burn fat and increase your fitness, then intervals should always be part of your program.