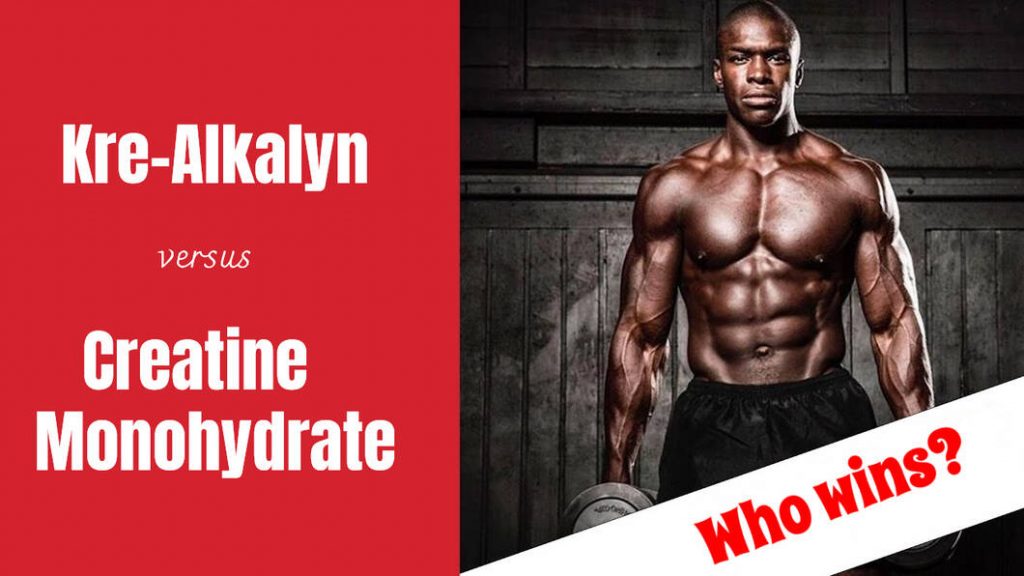 We all know very well that there’s a ton of research documenting the effectiveness of creatine monohydrate and its ability to recycle ATP in the body. Believe it or not it’s for sure one of the best performance-enhancing supplements out there. Therefore, it is not surprising that it is by far the most popular dietary supplement among athletes, bodybuilders and regular gym-goers. On the other hand, there is a relatively new type of creatine called Kre-Alkalyn (buffered creatine). There is a lot of misinformation about whether the buffered creatine has an advantage or not.

Manufacturers are doing their best to portray it as a far superior form of creatine in every aspect. That’s why finding the best type of creatine can be challenging task. Therefore in this article we review buffered creatine vs. regular creatine monohydrate to see whether these claims are well-founded or just a cheap marketing trick. Our goal is to make it easier for you to you decide which type of creatine is right for you. Anyway, both types of creatine can be purchased either as a standalone supplement or you can find them as an ingredients in different pre-workout formulations.

To remind you briefly, creatine is a nitrogen compound that is naturally formed in the liver by a combination of 3 amino acids: glycine, arginine and methionine. In humans, the vast majority (approximately 95%) of the body’s creatine stores are found in the form of phosphocreatine (creatine phosphate or CP) in the skeletal muscles, and smaller amounts (remaining 5%) are found in the brain, liver, kidneys, and testes.

It functions by being stored within muscle cells (where it also naturally occurs) as a source of fuel for very high intensity activities, and by supplementing the diet with it we are able to increase the amount stored within our muscle cell and increase our ability to work at a high intensity. The body uses it as the most potent form of energy: ATP (Adenosine Tri Phosphate). Therefore, supplementing with creatine helps produce more ATP which increases the body’s immediate energy supply. This is the main reason why creatine is probably the most effective legal, non-hormonal ergogenic agent in the history of all dietary supplements.

Kre-Alkalyn is a form of creatine that contains a slightly alkaline powder (such as sodium bicarbonate, soda ash or sodium carbonate, and magnesium glycerol phosphate) and does not convert into creatinine before it reaches the muscle cells. Manufacturers claim that the addition of this “buffering” creates a slightly more alkaline compound, which can reduce creatine breakdown in the stomach and improve creatine uptake into the muscle. Kre-Alkalyn is processed at a higher pH level than regular creatine monohydrate (pH-corrected form of creatine so to speak). It is believed the conversion of creatine to creatinine, a waste product, is a function of pH level. That conversion can be halted by pH level manipulation during the manufacturing process. The conversion being slowed or stopped may help the body absorb more creatine, thus lowering the dosages required for beneficial results.

What are the claimed benefits of Kre-Alkalyn over creatine monohydrate?

Kre-Alkalyn is claimed to be one of the most advanced forms of creatine available on the market. Thanks to its high pH value, Kre-Alkalyn allegedly enters the muscles without loss of value, thus allowing exceptional results and enchanting levels of ATP production. It does not require a loading phase and does not cause any of the side effects that are common in people taking creatine in other forms (such as creatine monohydrate).

What does the science & research say about it? Is there any evidence for the claims?

No clinical trials have been made on this type of creatine yet, but most user feedback is positive. On the other hand, the efficiency and safety of creatine monohydrate is well established in scientific literature.

Currently, only one study (dating from 2012) has evaluated the effectiveness of this form of creatine. This 2012 study confirmed similar performance improvements among different study groups. The first group received 5 g of creatine monohydrate for 28 days, the second group consumed an equivalent dose of Kre-Alkalyn, and the third group received a small dose (1.5 g) of Kre-Alkalyn per day.

Group receiving 5 gram doses began testing with a 7-day saturation phase, using 5 g of creatine 4 times daily. As a result, all groups significantly improved their muscle mass, fat percentage, and strength in the legs and arms. Even the group that received lower doses and did not pass the saturation phase achieved comparable values. However, it is important to note that the subjects in the study who received creatine monohydrate increased the proportion of creatine in their muscles by 50.4% after 28 days, while the group receiving Kre-Alkalyn was only 27.3%.

This means that you will see the same results when you use Kre-Alkalyn and creatine monohydrate. In other words, there is really no much difference in their ability to enhance performance, increase muscle mass and strength. A buffered form of creatine does not promote greater changes in muscle creatine content, body composition, or training adaptations than creatine monohydrate.

With Kre-Alkalyne, however, a lower dose seems to be enough and you don’t need a loading phase. 1.5 grams of Kre-Alkalyn is equivalent to about 10–15 grams of ordinary creatine monohydrate.

Ultimately, it seems that this form of creatine does have one advantage over creatine monohydrate. Despite a negligible difference between the groups in lean muscle mass and muscle strength, there was a significant increase in VO2 Max within the Kre-Alkalyn group.

Do not use if you are a kidney patient or have liver problems. Consult a doctor if there is any suspicion of the above liver or kidney problems. It’s also not recommended for pregnant women or people under 18 years of age. As with all other creatine-based products, it is recommended to drink plenty of water.

In addition, it is also worth noting that Kre-Alkalyn solves many of the side effects associated with creatine monohydrate (water retention, bloating effect, cramping and other gastrointestinal issues) and does not require loading or cycling. On the other hand, the vast majority of users have never even experienced these negative effects in the first place. So, at the end of the day, it all comes down to preference.