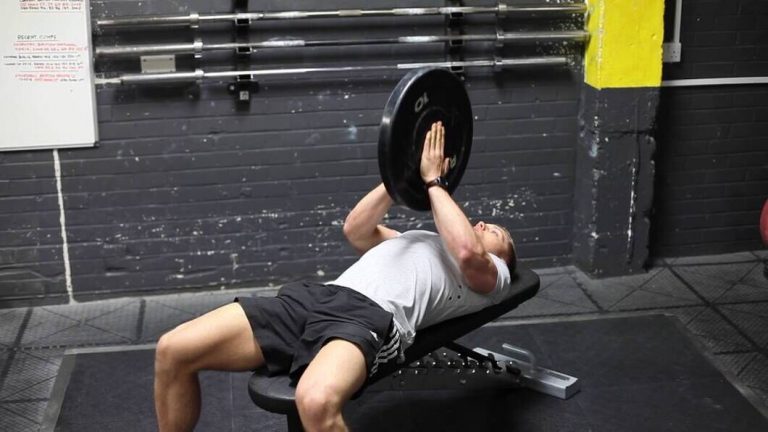 The lying plate press exercise is an excellent way to add depth to your inner chest. Many guys have only one goal – to develop massive chest muscles. If this is your only goal then this exercise is not the right one for you. It will not do much to develop massive chest muscles. However, we think it’s also very important to have a well-defined chest. The main goal of this exercise is to help you develop a “full chest” – one that has width, but also size near the sternum, filling out button-downs thickly and with impact. Remember, the key to your inner chest is creating a strong squeeze.

The lying plate press is a chest exercise where you pinch a weight plate between your hands throughout the bench press movement.

Other names for lying plate press

Follow these performance pointers & suggestions to get the most out of this great exercise.

The lying plate press is a perfect exercise for creating a defined mid-chest split. Barbell bench press and other chest pressing exercises simply don’t specifically target your inner chest. This exercise achieves exactly that effect since here you have to apply an inward force with your hands to keep the plate from sliding out of your grip. This is exactly what is needed for inner chest development. However, as already stated in the post, this exercise is not ideal when it comes to building overall chest mass. Therefore, in conclusion, the lying plate press is best as a supplemental exercise to complement your normal chest workout.