In this post you will find out how to perform machine biceps curl (sometimes called machine preacher curl) exercise safely and effectively in order to achieve maximal gains.

Unlike barbell or dumbbells, where the resistance varies during the lift, the machine provides a uniform resistance throughout the movement. There’s one disadvantage all free weight and cable biceps curl variations have that a machine doesn’t – gravity! Preacher curl machine removes almost any opportunity to cheat and provides a perfect biceps contraction by separating the elbow movement from the rest of the body. At the beginning, the muscle tension is intense, so be sure to warm up properly using light weights. To avoid the risk of tendonitis, do not completely extend the arm.

Most gyms have machines specifically designed to work the biceps. They may vary in appearance, but they provide the same basic lifting motion, using a weight stack for resistance. They have a seat, which is usually adjustable, about the height of a regular flat bench, and some have a back to lean against.

With some biceps machines, you extend your arms slightly toward the floor, as described in this post. On others, you extend your arms straight in front of you (see exercise variations).  On the first machines, the backs of your upper arms rest against a platform that slopes down at about a 45-degree angle. A machine like this simulates the motion of the preacher curl.

STARTING POSITION (SETUP): Adjust the seat of a preacher curl machine so that when you are in position your elbows line up with the machine’s axis of rotation. In other words, your armpits are flush against the pad. Grasp the bar using a shoulder-width underhand grip, with your elbows resting on the pad and arms out straight. 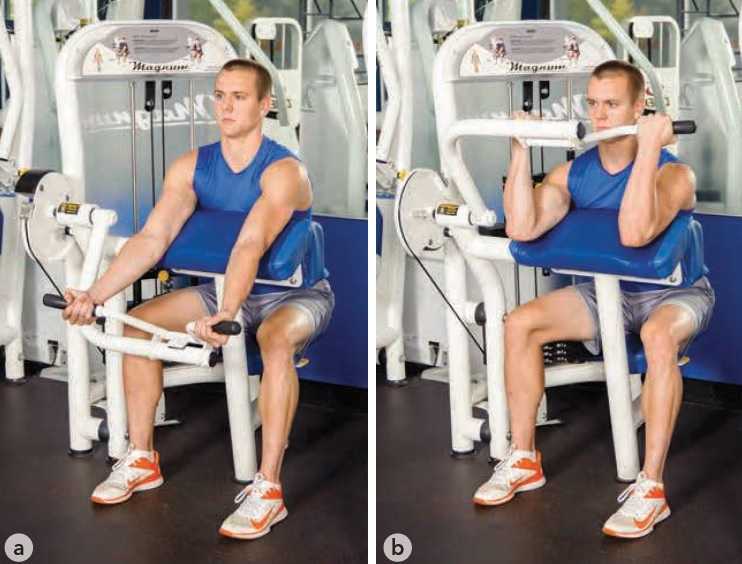 ACTION (EXERCISE EXECUTION): Pull or curl the handles slowly upward toward your shoulders by bending at the elbow. Keep your upper arm against the pad all the way up. Squeeze your biceps for a count, then return to the start position. 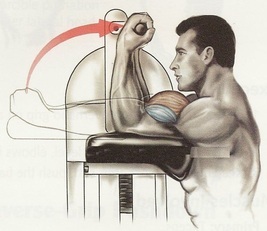 You are free to try these biceps exercises:

Machine biceps curl is almost the same as the EZ-bar preacher curl (or straight bar preacher curl). Like its free weight equivalent, doing machine biceps curls will not earn you a biceps “peak” or better muscle definition any more than other exercises. However, the machine biceps curl removes almost any opportunity to cheat and provides a perfect biceps contraction by separating the elbow movement from the rest of the body. In this regard, note that the more horizontal your arm position (shoulder flexed 90-degrees), the more powerful the biceps contraction. It also removes the help provided by gravity on some free weight benches (especially where the slope of the pad is less steep). The machine is therefore to be highly recommended for your biceps workout.