Meet the air bike – cardio equipment we love to hate 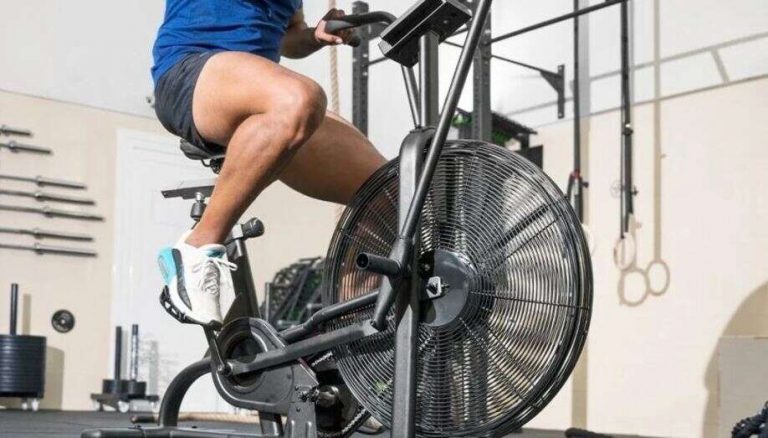 If you have ever tried to work on an air bike you know how challenging activity it is. The air bike (air resistance bike or fan bike) is a great tool for achieving all your cardio goals without losing muscle mass. You may be thinking this is impossible because we all know that cardio training does not go hand in hand with strength training. Well, the air bike is primarily a cardio device, but an extremely demanding cardio device that will activate almost all muscles in the body while cycling on it.

Although it exists since the 70s of the last century, it was very quickly lost in the sea of ​​new devices that were more popular and technologically advanced in that same period. In the last ten years, it is starting to return to commercial gyms and is becoming more and more popular thanks to the advantages it brings compared to other cardio machines.

Very similar in design to stationary exercise bikes and spinning bikes, this device simultaneously involves the work of the upper and lower parts of the body. Think of it as the sweaty lovechild of a classic exercise bike and an elliptical. The load that the air bike provides depends solely on the intensity of your work on the device. The harder and faster you move the pedals and handles, the greater the air resistance that is created by the rotation of the fan that is directly connected to them.

The advantages of using this device were recognized by professional athletes long before it gained commercial popularity, and today you can easily find it in almost every gym. However, it’s still often avoided and unfairly neglected, mostly due to its old-fashioned appearance and people’s ignorance of the benefits of using this device.

Personal trainers recommend the use of an air bike to people struggling with excess weight because it is easy to use, the effects are multiple because it encourages high-calorie consumption, the risk of injury is low, and results are achieved very quickly with properly programmed training and nutrition.

American football players in offensive and defensive shifts often do short intervals on the air bike to raise their heart rate and activate their muscles before entering the game. CrossFit boxes or gyms are also partially responsible for the popularization of the air bike, which has become an almost mandatory part of the WODs that are done in CrossFit gyms around the world. WOD stands for Workout of the Day. Most CrossFit gyms (or boxes) post one workout each day for their members and online followers to complete. It’s called a box because it’s typically in a warehouse-type space. Instead of seeing the machines, you see in a typical gym, you’re more likely to see stacks of weights, barbells, pull-up bars, and lots of open space.

Why is working on an air bike actually difficult?

There are two main reasons:

Legs are used to work on most cardio machines. With treadmills, stationary bikes, spinning bikes, and steppers you work only your lower body muscles while the upper body is mostly passive with minimal arm activity. On the other spectrum of cardio equipment is the ski ergometer, which is started by the work of the arms and the upper body, but the legs are mostly passive.

The rowing ergometer is the only device in which the whole body actively participates when working on it, but only in the pulling phase because the muscles are not excessively active in the phase of returning the handle back to the starting position. Air bike is the only device that keeps both the upper and lower body active all the time. It is designed so that the hands actively participate in the phase of pushing and pulling the handles, and the legs pedal the whole time.

The goal of cardio training is to improve the cardiorespiratory capacity of the body, which cannot be achieved directly, but it is necessary to engage the muscles to the greatest extent possible in order to increase the need for greater blood flow through them and thereby make the heart work harder to meet the body’s energy needs. The more muscles are involved in the work and the more they work, the greater the need for the cardiorespiratory system to deliver energy to the muscles.

If we go back to cardio equipment, those that involve only one part of the body will achieve a lower cardiorespiratory response of the body compared to equipment that involves the whole body. And when we add active work during the entire activity, without passive parts, it becomes clear why the air bike is currently the best device on the market when it comes to the cardio segment of fitness.

Of course, if you want to do an air bike workout using only the upper or lower body, the design of this device will allow you to do that as well. Pedals and handles can only be operated with one part of the body, while the rest does not participate in the work.

The flywheel is a part of every bike ergometer that creates resistance that needs to be overcome. The greatest resistance is always at the beginning of the activity because it is necessary to start the flywheel from rest. Once you start the activity, the resistance is regulated by a system of brakes, magnetic or mechanical, which can be adjusted to provide the desired level of resistance.

When the fan rotates slowly, the air resistance is weak, and working with the pedals and handles is not difficult. However, the more the speed of working with the pedals and handles increases, the air resistance in the fan increases and the activity becomes more difficult. This is very similar to swimming or rowing in the water. The faster you push your arm (or oar) through the water, the more resistance you are going to feel, and of course, the faster you are going to move.

What needs to be emphasized is that the increase in resistance is not linear to the increase in the speed of rotation of the pedals and handles. To double the rotation speed of the fan, it is necessary to invest approximately four times more force. The great thing about working on an air bike is that we regulate the resistance depending on our capabilities, that is, the harder we work, the more resistance we will create. This is also a very efficient way of working because there is no idling. All the force we produce through muscle work is used to start the fan that creates resistance.

This is the reason why working on an air bike is so difficult and demanding and everyone can reach their maximum. If the activity is slow, working on an air bike will not seem demanding and other machines may seem better. But the air bike is not intended for such a way of working. It gives the best results at a high intensity of work – in interval work protocols such as Tabata or HIIT.

Precisely because the level of resistance depends on the force produced by moving the pedals and handles, it is possible to easily make changes between high and low-intensity intervals without pressing various buttons as on other machines.

Advantages of using an air bike

Working on an air bike is an extremely demanding and tiring activity for the body, but the advantages that come with this cardio device are numerous:

Disadvantages of using an air bike

When we look at this device from the technical side and its applicability in the training itself, it is really difficult to find any specific disadvantages:

The air bike is certainly the best cardio machine currently available on the market. Its shape is most similar to a stationary or spinning bike, and when we look at muscle activity, rowing and elliptical ergometers are closest to it, because both the upper and lower body participate in the work, but not to the same extent as with an air bike.

The simultaneous operation of the pedals and the handles involves a large number of muscles that are active all the time and all the force produced by the body is aimed at driving the fan that creates air resistance. If you want to raise your heart rate in a short time, burn a large number of calories and work on improving your cardiorespiratory system, the air bike is the choice for you. Without a shadow of a doubt, an air bike s one of the most effective ways of absolutely monstering the cardiovascular system, therefore working up a sweat and burning fat in the most time-efficient way possible.

What are the different types of pull-up bars for a home gym?