Myths about Sweating and Exercise

Unfortunately, there’s a lot of workout advice out there that won’t help you meet your goals and could actually do more harm than good. Here’s an overview of some of the most enduring myths about sweating and exercise, as well as the real science that can help you meet your fitness goals in a healthy way.

Who sweats more – fit people or fat people? You’d think that an out-of-shape person would sweat more than a fit person, yet actually it’s just the opposite. That fact is not apparent because the fit person keeps his core temperature in check better. But if his core temperature starts to rise in spite of his superior system, the fit person starts sweating immedi­ately. It’s as if his sweat mechanism, like all his other bodily mechanisms, is more in tune with his needs. He resists any initial rise in core temperature, but if it does rise he compen­sates more quickly.

Let us consider this statement in a little more detail. Fit people excel at resisting fluctuations in their core tempera­ture. When they exercise mildly on a moderately hot day, they get rid of heat so efficiently that their core temperature doesn’t change. Unfit people, in the same conditions, start to accumu­late core heat fairly quickly, triggering the sweating mecha­nism. That’s why fat, unfit people appear to sweat sooner and more copiously than fit people. We have all seen fat people sweating like crazy on a mildly hot day, which tends to make us think that it’s the fat causing the sweating. In fact, low fitness is more the cause. Equally fit male and female athletes sweat the same even though females almost always have more fat.

Conclusion: Unfit people heat up faster than fit people, but their sweating mechanisms take longer to get started. In general, fit people are more efficient at cooling their bodies. That’s why fit people start sweating immedi­ately and they sweat more.

#2 When you sweat you’re losing lots of fat

Some people still don lots of clothing, heavy sweat suits or plastic suits, and wrap towels around their necks while doing their cardio workouts. The idea is that by making yourself sweat more, you’ll burn more calories. However, there is no justification for doing this. On the contrary, it is very harmful.

Such people think that when they sweat they are losing lots of fat. Not true. They are losing water. How much fat you lose depends on how well your muscles are trained to burn the stuff, and that depends on how aerobically fit you are. You can’t “sweat off” fat. Yes, these people will lose weight by sweating — water weight. They’ll become a dehydrated fat people.

People who put on lots of clothing and wrap towels around their necks when they exercise are defeating the purpose of sweating. They raise their body temperature but don’t allow the sweat to evaporate and cool the body. It’s okay to wear extra clothing during your warm-up, but you should shed the outer layers as your body temperature rises. You want a warmed-up body, not an overheated one. Let your body sweat and cool naturally.

The National Collegiate Athletic Association banned rubber sweat suits in 1997 after three wrestlers died using them in a high-heat environment to drop as much water weight as possible. Wearing a sweat suit causes the body to overheat and in turn sweat more. As a result, you risk heat stroke, dehydration and kidney damage.

Conclusion: The idea that we must “work up a good sweat” by using saunas or wearing plastic jogging suits is just plain silly and potentially dangerous. If only this were true, the sauna would be our best friend. 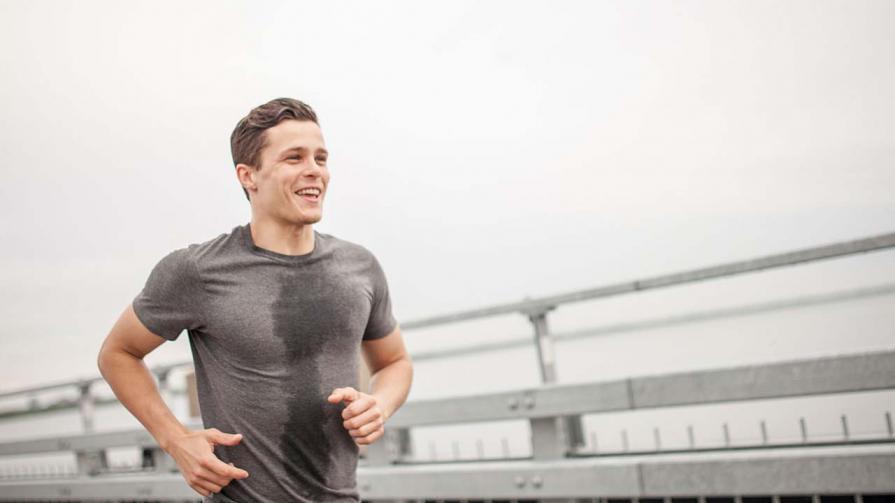 #3 Sweating rids the body of toxins

Another common belief is that sweating rids the body of toxins. Sweat is nothing more than water, salts, and urea. The body isn’t detoxified when it sweats. The only thing it gets rid of is water and a few salts. It was popular several years ago to take salt tablets. This turned out to be as effective as fixing a broken hinge with a sledgehammer.

The salts lost during a 30-45 min­ute session of moderate exercise are negligible. You can easily replace them in the first post-exercise meal. If you exercise at high intensity for several hours, taking a sports drink or electrolyte drink during and after the activity can be helpful.

Conclusion: No, you can’t sweat out toxins! Toxins such as mercury, alcohol and most drugs are eliminated by your liver, intestines or kidneys. As already stated, sweat is 99% water combined with a small amount of salt, proteins, carbohydrates and urea. Therefore, sweat is not made up of toxins from your body, and the belief that sweat can cleanse the body is a myth.

Again, the reality is different. Again, one more big myth about sweating and exercise.

The purpose of perspiration, or sweat, is to cool the body down. When we exercise, our body temperature rises, so sweating normally occurs during exercise. Every individual is different and some people sweat a lot with minimal activity, while others can go through an incredibly intense workout with minimal perspiration.

Conclusion: You should judge the difficulty of your workout based on how you feel, not by how much you’re sweating.

Here are some common myths about sweating and exercise that will hopefully clear up any questions you may have.

A common misconception in physical fitness is that sweat is a direct result of fat loss. This isn’t so. If you think that an out-of-shape person would sweat more than a fit person you’re wrong again. This isn’t so. Another common belief is that sweating rids the body of toxins. Nothing could be further from the truth. Lastly, if you think you’re not exercising hard enough if you’re not sweating, you’re wrong again.

The bottom line is: don’t worry about how much you sweat. Some people sweat more than others, just as some people drool more when they go to the dentist. Just drink lots of fluid and avoid overheating – avoid lots of clothing, heavy sweat suits or plastic suits.