Muscles of the Gluteal Region – Anatomy and Morphology

The gluteus maximus, gluteus medius, and gluteus minimus, collectively referred to as the glutes, make up the major muscles of the gluteal region (buttocks).

As humans evolved and began walking upright on two legs, their glutes developed. Further gluteal development occurred as humans gained coordination and learned to use the glutes when sprinting, throwing, and swinging things, and now our gluteus maximus muscles are the best developed of all of the primates. Unfortunately, because of today’s sedentary lifestyle, many people possess weak and underdeveloped glutes.

Not only are the glutes the powerhouse of the human body, but they’re also the keystone muscles that keep everything else in line. Strong gluteals are critical for a properly functioning body. Weak glutes have been associated with myriad dysfunctional movement patterns. It is important that the knees track properly over the toes when climbing, stepping, jumping, landing, and squatting. Because the glutes contract during hip movement to prevent the knees from caving in (valgus collapse), weak glutes can lead to knee pain caused by excessive stress in the patellofemoral region if this repetitive dysfunctional pattern occurs. Furthermore, strong glutes will shift movement patterns to absorb and produce more force at the hips and less at the knee joint.

Anatomy of the Gluteal Muscles

The big muscle that gives shape (roundness) to your butt is the gluteus maximus. Fully developed, it looks like a construction helmet atop the back of your thigh. Gluteus maximus (also referred to as the glutes) arises from the large area on the rear of the pelvic bone, passes down behind the hip joint, and attaches onto the upper femur. It is often said that the gluteus maximus is the strongest and most powerful muscle in the human body. It is also the largest muscle in the body and the largest and most superficial of the buttocks muscles. Its large size in humans is thought to be due to the demands of upright stance and locomotion.

The gluteus maximus is the most powerful hip extensor and is crucial for movements requiring large forces such as going up stairs, walking up hills, running, and jumping. In addition to hip extension, the gluteus maximus also assists other muscles in the region to produce hip external rotation, and the upper fibers can produce hip abduction against resistance. 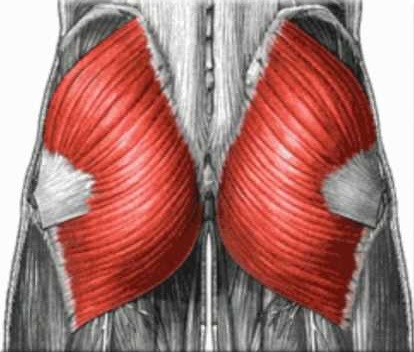 The gluteus medius is a small muscle that lies laterally above the gluteus maximus. It is visible from the side and the rear. The gluteus medius provides the rounded contour to the side of the pelvis, although its posterior fibers  are covered by the gluteus maximus and its anterior fibers by the tensor fasciae latae. It is fan-shaped, having its broad part above and its tendon below. It fills the space between the iliac crest and the greater trochanter of the femur.

The gluteus medius, with the help of a few other muscles such as the tensor fasciae latae and the sartorius on the outer thigh, moves the leg to the side. This action is called hip abduction – this means moving the thigh away from the midline (centerline) of the body. The gluteus medius is also a prime mover for hip internal rotation.

The gluteus medius and minimus

The gluteus minimus has the same action as the gluteus medius, that is abduction and medial rotation.

Both the medius and minimus tend to be especially well developed in soccer players and martial artists, since these muscles are important in kicking.

Exercises for the Muscles of the Gluteal Region (Gluteal Muscles)

Exercises for the muscles of the gluteal region (gluteal muscles) can generally be divided into two types: compound exercises and isolation exercises. Compound exercises involve multiple joints and multiple muscle groups. The squat, for instance, is the most notable and probably the best of all glute exercises; it involves flexion and extension at the ankle, knee, and hip joints as well as recruitment of the gluteal (gluteus maximus), quadriceps, and hamstring muscle groups. Isolation movements involve just one joint and usually just one muscle or one muscle group. Hip-extension exercises that involve movement only at the hip joint, such as standing hip extensions, should always be done later in the workout.

The gluteus muscle is worked during several core leg exercises that require hip flexion and extension, namely squats, deadlifts, lunges, and leg presses. The glutes are not really worked during leg exercises where the hip joint is held stiff (e.g., leg extensions and hamstring curls). To maximize gluteus work, it is important to actively contract your glutes at the finish position by squeezing your thighs backward.