We eat food because the body needs calories to do anything that we do, from thinking to physical labour, to even digesting our food. All foods give us energy (or calories) but are all calories the same? No! Calories can come from fats, carbohydrates and proteins. For optimum functioning, the body requires micronutrients such as vitamins and minerals, and antioxidants for good body metabolism, tissue repair and optimum regulation of bodily functions. This is where nutrient-dense foods come into play.

Adequate diets are most easily achieved by including foods that are good sources of a number of nutrients but not packed with calories. Foods that provide multi­ple nutrients in appreciable amounts relative to calories are considered nutrient-dense. Empty-calorie foods are those that provide only calories and low amounts of nutrients (soft drinks, candy, sugar, alcohol, fats). In one of our previous articles we have already discussed about empty calories. It’s a good idea to start from there since empty calories are a good starting point for a discussion of nutrient density, as they represent the polar opposite of nutrient-dense foods.

What is the concept of nutrient density?

What are nutrient-dense foods?

Table: Amount of energy from various foods that would need to be consumed to obtain the UK adult reference nutrient intake (RNI) for vitamin C (40 mg).

Clearly oily French fries from a burger bar are a poor source of vitamin C. Even fresh home-made chips (fries) are much worse than boiled new potatoes. Oranges, peppers and grilled tomatoes are clearly good sources of the vitamin. Addition of sugar (canned oranges) or fat (fried tomatoes or potatoes) reduces the nutrient density because it adds energy but no more vitamin C. Avocados have relatively modest amounts of vitamin C and the nutrient den­sity is further depressed because they are relatively high in fat and energy.

Examples of a nutrient-dense foods

An example of a nutrient-dense food is milk. When com­paring milk with a fizzy drink, you will find that milk contains proteins, fats, carbohydrates, vitamins and minerals, whereas a fizzy drink has no nutrients and only contains sugar flavourings. 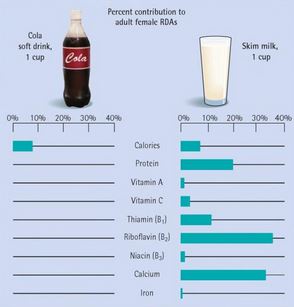 Why you should choose nutrient-dense foods?

These foods support and build super health because they are exceptional sources of all the building blocks necessary for our bodies to function optimally.

From this perspective, it would be wisest to select a diet in which most caloric contributions are accompanied by the nutrients needed for the body to rebuild, repair, and maintain tissue and over­all health. Most empty calorie allowances are very small, between 100 and 300 calories, especially for those who are not physically active.

An empty calorie is not, as was once thought, a neutral energy source. It’s actually a negative source, as the body requires nutrients in order to metabolize a calorie to generate heat. By con­tributing nothing of nutritional value while using up nutrients that are present in the body, empty calories actually end up robbing, or depleting, the body of nutrients. The long-term consequence of relying on a diet that is heavy in empty calories is nutritional depletion, resulting in low-level reserves of vitamins, minerals, and other vital nutrients.

People with low energy intakes especially need to ensure that their diet is nutrient dense, e.g. elderly housebound people and those on reducing diets (trying to lose weight and body fat).

Why do we need new scor­ing systems?

In the table below you can see how various foods differ in nutrient density for calcium and vitamin A. For example, because frozen yogurt is lower in fat than ice cream, its nutrient density in terms of calcium is much greater. However, note that, calorie for calorie, ice cream has more vitamin A than frozen yogurt. Thus, the concept of nutrient density is somewhat complex. Because of this, some researchers are currently developing new scor­ing systems that capture the holistic nature of a food’s overall nutrient density. It is likely that these new “nutrient-profiling” scores will be used in the future to help consumers choose the most nutritious foods within their budgets.

To get all the nutrients your body needs and to avoid consuming empty calories, have more nutrient-dense food. Nutrient-dense foods provide more nutrition for a relatively small amount of calories eaten. Fruit and vegetables are perfect nutrient-dense snacks as they are low in calories and are packed with dietary fibre and vitamins. Therefore you should not use calorie count as the main criterion when buying food, even if you’re trying to lose weight.

Eat food high in nutrients. Other nutrient-dense foods are nuts, dairy, beans and some kinds of fish. When you eat, think of it as supplying fuel to your body. Give it the best fuel, and it will run the best!  By consciously choosing more nutrient-dense foods (lean proteins, healthy carbohydrates, vitamins, minerals, antioxidants, and fats essential to our health), you’ll get the beneficial nutrients your body needs without consuming too many calories.