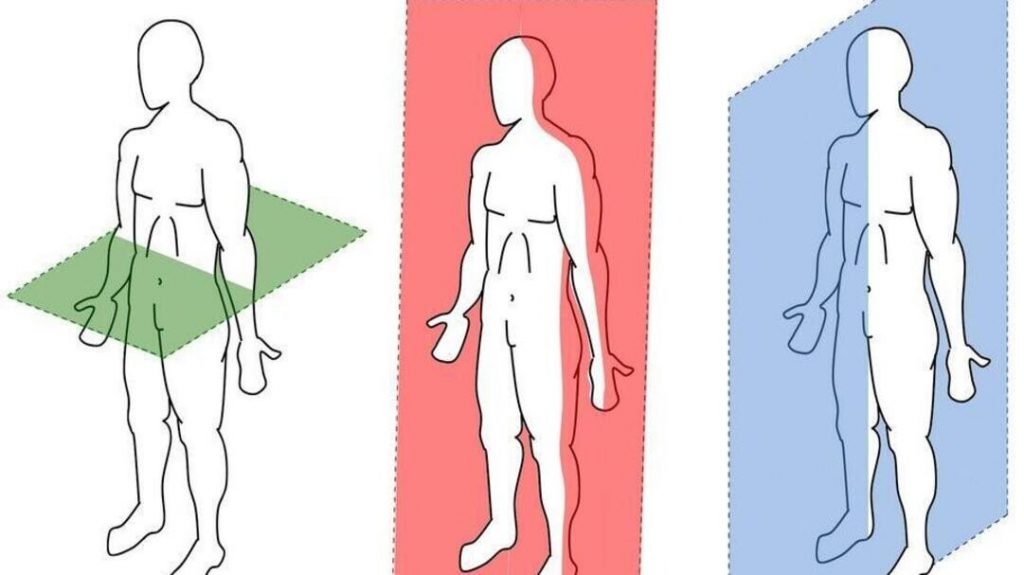 Do you ever wonder what plane of motion you are moving in during an exercise or everyday activities? Most likely not, but you should. There are many reasons for that. The first step in understanding how to categorize exercises is to get acquainted with planes of motion.

The universally accepted method of describing human movements is in three dimensions and is based on a system of planes and axes. We often use the term plane to describe an imaginary flat surface at various angles to the body. Therefore, we don’t need anything else to describe human motion except the concept of axes and planes. Three imaginary planes are positioned through the body at right angles so they intersect at the center of mass of the body. Let’s take a closer look at this important anatomy lesson…

What is plane of motion?

Plane of motion refers to the particular plane – front and back, left and right, top and bottom – in which movement occurs. To put it another way, when you lift weights, the motion usually occurs across defined planes of motion. This method of classification became popular with strength coaches because it helped describe movements in sport.

Coaches would look at where the motion occurs (plane of motion) and then try to mimic that movement in a controlled environment to improve performance in a specific area or action. For example, if a movement occurred across the frontal plane of motion (side to side), then the coach might implement side-to-side or lateral movements (exercises) in the gym.

In sports, movement involves a blend of planes, which is why so many coaches incorporate “multiplanar” exercises into their regimens. That is perfectly understandable because often times we exercise more in a single plane of motion which can lead to muscle imbalances. This is especially true for exercising in the gym and less about doing specific sports.

When it comes to human movement, there are three planes of motion:

Coronal (or frontal) plane divides the body into front and back halves/sections. Frontal plane motion occurs around an anterior-posterior axis. The movements that occur along the frontal plane are side-to-side motions.

Sagittal plane divides or bisects the body into left and right sides/sections (but not necessarily equal halves). This type of motion motion occurs around a coronal axis.

The movements that take place within this plane include forward and backward motions (as well as up and down), flexion (bending), or extension (straightening).

An example of a lower-body exercise in the sagittal plane is the leg extension. Other examples include hip thrusting, squatting, deadlifting, biceps curls, calf raising, walking, running, and any exercise you perform with little to no side-to-side or rotational movement. Exercises in this category can be done with higher loads and typically comprise the main lifts.

This plane divides the body into top (superior) and bottom (inferior) halves.

Transverse plane motion occurs around a longitudinal or vertical axis. For this reason the movements that occur along this plane are mostly rotational.

An anteroposterior axis (sagittal, sagittal-transverse, or cartwheel axis) is an imaginary line running from anterior to posterior and perpendicular to the frontal planes. In other words, it runs from front to back through the body’s center of gravity. An example of rotation around this axis would be a cartwheel in gymnastics.

A transverse axis (lateral, frontal, mediolateral, frontal-transverse, or somersault axis) is an imaginary line running from left to right and perpendicular to the sagittal planes. In other words, it runs from side to side through the center of gravity just like the player on table football. An example of rotation around this axis would be a front somersault in diving.

A longitudinal axis (vertical, frontal-sagittal, or twist axis) is an imaginary line running from top to bottom and perpendicular to the transverse planes. In other words, it runs head to feet through the center of gravity. An example of rotation around this axis would be a pirouette in skating.

To analyze the movement of the body you need to understand how the body moves through different planes and around different axes. The best way to fully understand this concept is to take a closer look at the following chart.

The human body moves in three planes, and specific types of movements occur in each plane. Movement is said to occur more commonly in a specific plane if it is actually along the plane or parallel to it. Although movements can be one-plane dominant, no motion occurs strictly in one plane of motion.

Bottom line, it is important to perform exercises from all planes of motion to be muscularly well-rounded and more resilient.

The muscles that help push and pull at the same time