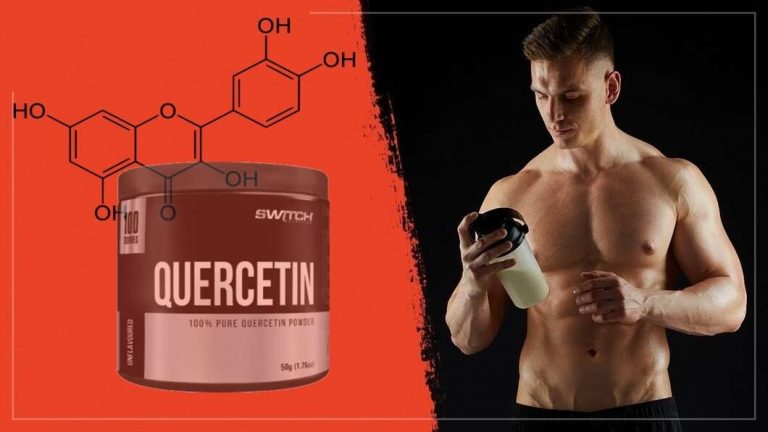 Quercetin is a polyphenolic flavonoid found naturally in red wine, grapefruit, apples, onions, black tea, cranberries, blueberries, and, in lesser amounts, in leafy green vegetables and beans. The effect of quercetin supplementation on human metabolism has been researched for the past 45 years. From a health perspective, quercetin has been most investigated in the context of its anticancer effects (Chirumbolo, 2013) since it’s a powerful antioxidant. Due to the same reason, it also has anti-inflammatory, anti-allergic, anti-rheumatic, and antiviral effects.

Interest in the effects of quercetin on physical performance increased after a 2009 study conducted on mice. In that study, consumption of quercetin (dose ranging from 12.5 mg/kg to 25.0 mg/kg) for seven days resulted in an increase in endurance by as much as 40% (Davis and colleagues, 2009). After these interesting results, the number of studies conducted on humans has also increased, with promising results.

Effect of quercetin supplementation on muscle damage and inflammation

Muscle inflammation most often occurs after training that includes eccentric actions (actions during which the muscles are stretched). Muscle soreness usually lasts a few days after training, and some of the most common symptoms include:

Conducted scientific research on the effects of quercetin

Due to its antioxidant properties, several studies have examined the impact of quercetin consumption on reducing muscle damage and inflammation.

The influence of quercetin consumption on maximum isometric strength

In the study by Bazzucchi and colleagues (2020), 16 respondents were included. Subjects consumed a placebo or quercetin for 14 days. The intake of quercetin was 1000 mg per day, divided into two capsules of 500 mg each. On the 15th day of the study, the subjects did a workout that included 10 sets of 10 repetitions of biceps curls. In each repetition, the subjects performed only eccentric muscle actions, because as we mentioned previously, they are particularly potent for causing muscle inflammation.

After doing this training, the subjects did an isometric strength test. Testing was done immediately after training, and every day for the next 7 days. This study design allowed the researchers to see if quercetin supplementation allowed for a faster recovery of strength in the days after training, which is one of the significant indicators of recovery from muscle inflammation.

The results showed that the consumption of quercetin enabled the test subjects to have a smaller loss of strength immediately after training, and faster recovery during 7 days after training (Figure 1).

In addition, quercetin consumption allowed for a greater range of motion after training – another indicator of less muscle inflammation.

Figure 1 – The influence of quercetin consumption (14 days at 1000 mg per day) on maximum isometric strength immediately after training, and on strength recovery during the next 7 days.

The influence of quercetin consumption on training frequency

From a practical point of view, these results are important to us because of the training frequency. Namely, if you train with a higher training frequency (for example, 4 times a week), it is important for you to manage to recover sufficiently between training sessions.

Namely, when we experience major muscle inflammation, research has shown that protein synthesis after training is more directed towards the recovery of these muscles, and not necessarily towards the creation of new muscle tissue (Damas and colleagues, 2016). Given that quercetin can reduce muscle inflammation, it can potentially have positive effects on increasing muscle mass, as protein synthesis after training will be more directed towards building new muscle mass.

The previously shown data tells us that supplementation with quercetin for 14 days can have positive effects on reducing muscle inflammation. What effects can quercetin have if we consume it only once, for example, only before training?

Patrizio and colleagues (2018) examined the impact of consuming 1000 mg of quercetin 3 hours before training on training performance, as well as on the reduction in strength after training.

Figure 2 – Effect of quercetin consumption (1000 mg 3 hours before training) on strength reduction after training that included 3 sets of 8 repetitions on 8 different exercises.

These results clearly tell us that the consumption of quercetin makes it possible to maintain strength at a higher level during training, which can be of practical importance, especially if you do a large number of exercises in one training session.

Quercetin has a positive effect on reducing muscle inflammation and on faster recovery of strength due to two factors. The first factor is related to the effects of quercetin on reducing inflammatory signaling in the human body. Namely, this supplement reduces the activity of pro-inflammatory factor-kappaB (Harwood et al., 2007).

The best-known supplement that has such an effect is caffeine. In addition to caffeine, research has shown that quercetin also has properties that allow it to bind to adenosine receptors, which consequently affects the reduction of fatigue and the feeling of pain (Alexander, 2006).