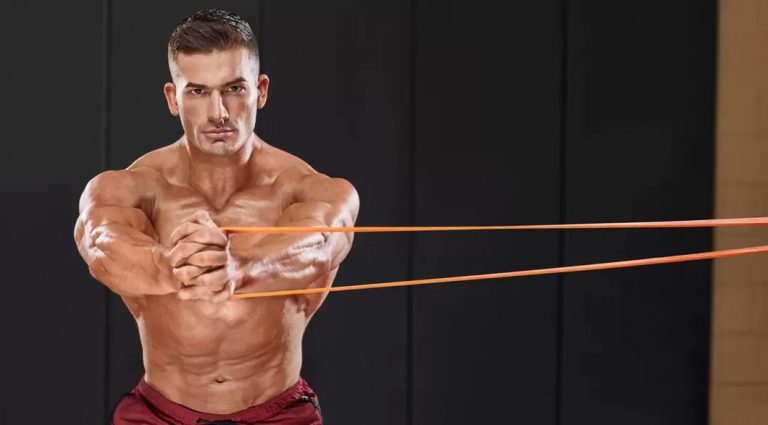 The resistance band Pallof press is a highly effective anti-rotational core stabilization exercise that helps athletes resist spinal flexion, extension, and rotation. It isometrically challenges the obliques and the rectus abdominis to resist spinal and pelvic rotation and the sheer forces generated in rapid turning, change of direction, and agility movements.

In this post you’ll find out how to perform the band Pallof press with a long resistance band wrapped around a power rack or a similarly sturdy implement at approximately chest height.

Here are step-by-step instructions on how to perform the resistance band Pallof press with perfect form.

There are some tips that will help you get even more out of this already amazing core exercise.

This video is designed to show you exactly how to perform the resistance band Pallof press using perfect technique so you can get the most from this great core exercise.

Therefore, you can alter this exercise by assuming different positions, such as half-kneeling, tall kneeling, or even a split stance. You could also add a lift after the initial press and hold. Another variation is squatting while doing the press. You can play with different squat depths to challenge your core and hips at different angles, and so on.

Try these other core exercises.

The Pallof press is classified as an antirotational movement. The goal of the exercise is to develop stability and strength to prevent rotation. Preventing rotation allows the body to resist forces acting upon it that may try to rotate or move it in an injury-producing fashion. This concept is especially important for groundstroke movements in tennis and the ability to handle the rotation that occurs when swinging at high velocity.