This is another very essential lesson about the functional muscle anatomy. In this post you will find out everything you need to know about the functional anatomy of the rhomboid muscles – shape (appearance), function (muscle action), location, insertion, and origin. We will also disclose the best possible exercises to target your rhomboid minor and major. These are very important upper back muscles you simply must not neglect.

Short Introduction Into Back Muscles

When you’re putting together a back program, keep in mind that you’re hitting three distinct areas: the upper, middle, and lower back. You have to work all three areas to build strength, improve posture, and get the kind of shape you’re looking for.

Your upper back area includes the trapezius, teres major, and the rhomboids. The middle back area comprises one main muscle: the latissimus dorsi, or “lats“. The lower back area constitutes only erector spinae – group of muscles that support the spinal column.

Functional Anatomy of the Rhomboid Muscles 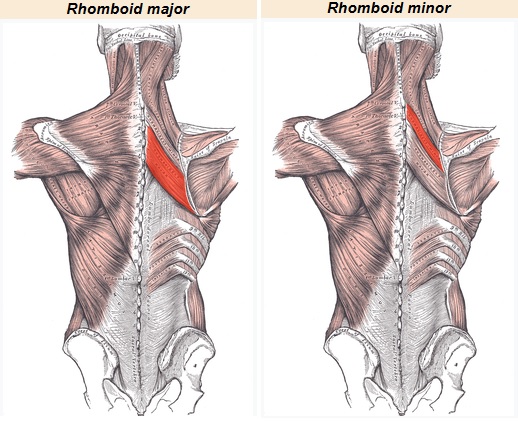 Sometimes we call them “Christmas three muscles“.  When you look at the rhomboids bilaterally with the spinal column between them, they look exactly like a Christmas tree in shape.

The rhomboids bring (retract) the scapula in toward the spine, essentially squeezing the shoulder blades together. In other words, the lower-trap and rhomboid muscles tug your scapula downward, as in the vertical pull exercises (pull-ups and lat pull-downs).

The rhomboid muscles (together with the levator scapulae) anchor the scapula to the spine. That’s the main reason why we call them scapular retractor muscles.

IV. Origin and Insertion of the Rhomboids 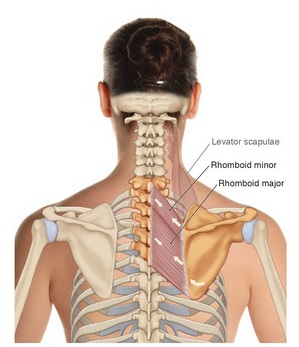 The rhomboids (major and minor) originate on the spine and attach to the middle part of the scapula, or shoulder blades.

The middle and lower trapezius and rhomboid muscles make up the thickness of the upper back because both attach from the upper vertebrae to the scapulae on either side; the rhomboids lie beneath the trapezius, and thus are less visible to the naked eye.

If your rhomboid muscle becomes shortened and stiff because of multiple trigger points, when you raise your arm the rhomboid does not allow the acromion process of your shoulder blade to move out of the way of the elevating humerus. This causes the tendons of the rotator cuff and bursa to become pinched or caught between the head of the humerus and the acromion process, caus­ing inflammation, pain, and eventually degenerative changes in your shoulder.

Exercises for the Rhomboids

Because the two rhomboids, major and minor, are right next to each other they are basically inseparable when in comes to training.

Considering you are retracted during any rowing motion exercise or pull-down, the rhomboids generally work with the lats. The rhomboids do not insert on the humerus, so they do not perform movements like internal rotation. In most back exercises, separating the rhomboids and the lats is difficult. The lats are normally the agonist because they are large and strong, and the rhomboids are a synergist, much like the teres major.

Rhomboids in a Nutshell

Beneath your trapezius lie your rhomboids, specifically the rhomboid major and rhomboid minor. These are small muscles that start at your spine and attach to your shoulder blades. They assist your traps with pulling your shoulder blades together. The rhomboids are two interesting muscles whose name means “rhombus in outline”. Finally, as you can see from the images above, the rhomboid muscles are paired muscles, one on each side of the spinal column.