The body comprises an integration of approximately twelve distinct systems that continuously interact to control the multitude of complex bodily functions. The posts listed in the anatomy category of this site specifically illustrates and analyses the systems that control movement and posture, namely the muscular and skeletal system, which is often jointly referred to as the musculoskeletal system. It’s time to explore the human skeletal system in this engaging and informative post.

Organization of the human skeletal system

Adults have 206 bones in a skeleton weighing about 8–9 kg (18–20 lb). The skeletal system acts as a movement framework. Muscles attach to bone and cross joints. Where they cross free-moving joints, contraction of the muscles causes joint movement.

As we’ve said, muscles and bones and joints form one integrated system, and no one component is more important than another. Without muscles, you would be a motionless pile of bones. Without a skeleton,  you’d look and move more like a jellyfish. Also, without joints to control and stabilize the bones, you’d stumble around like the scarecrow from the Wizard of Oz.

The bones can be divided into two anatomical divisions: the axial skeleton and the appendicular skeleton.

You take for granted that your muscles are a living, dynamic system. The skeleton might seem rather inert, by comparison, a convenient frame to which muscles and organs are attached. True, after you stop growing in your teens or early twenties, your bones don’t get any longer. But your skeleton is a system as alive as any other in the body. 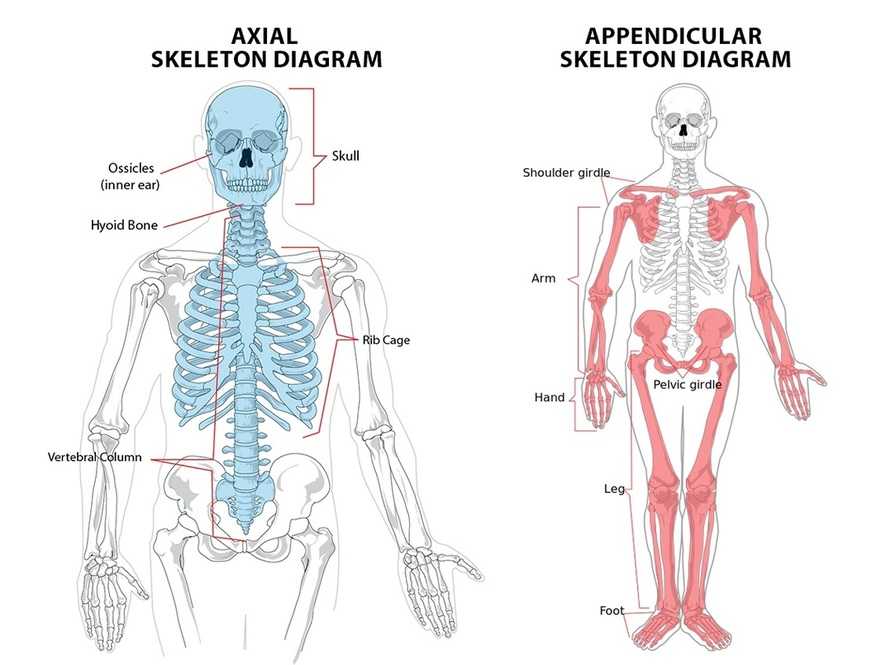 About a third of bone is made up of living cells. Inside the bone, marrow cells are producing red and white blood cells, as well as other cells that help drive the immune system. The outside of the bone is covered by a fibrous membrane, the periosteum, which contains blood vessels and nerves.

But even the two-thirds of the bone made up of hard mineral (mostly calcium phosphate) isn’t static. Bone is always slowly but constantly being reshaped. Special cells called osteoclasts eat away at old or damaged bone. This activity is balanced by that of the osteoblast cells, which create new bone. Bone is reabsorbed where it is not needed and laid down where it is.

As overall bone density drops significantly in the senior years it’s up to you to stress the system in healthful ways (i.e., activate the osteoblasts by lifting weights, or walking). That way your skeletal system stays resilient enough to handle the bumps of everyday life. In other words, use it or lose it. 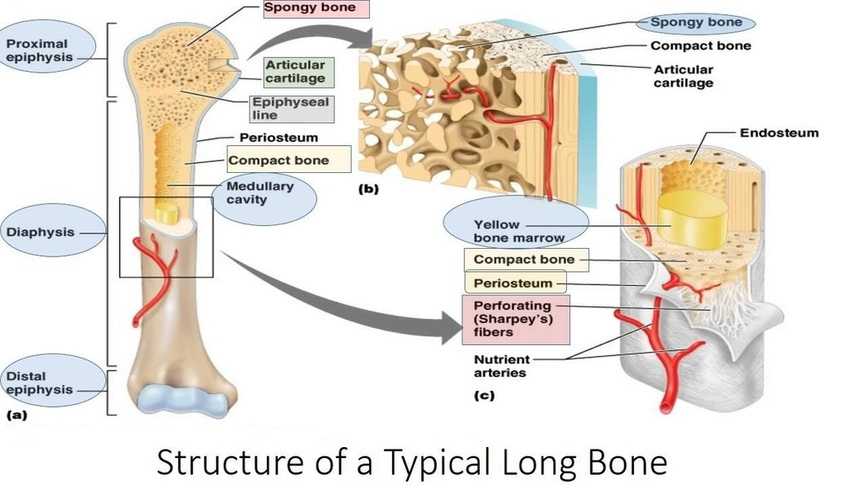 Movement happens when muscles generate the force to move the bones. But we need a third component –  a simple mechanism that allows bones to articulate, to move against each other, so that actual work—lifting, lowering, etc.—can occur. We call these mechanisms joints.

The knee and the elbow are hinges that only allow movement in one or two directions; the ankle and the wrist allow more freedom of movement. The hip and the shoulder are ball-in-socket joints with the greatest range. Every joint makes its own trade-off between strength, stability, and range of motion.

The joint’s purpose is to provide the bones with the maximum movement, the necessary stability, and a minimum of friction.

The bones that form the joint fit into a sleeve called a joint capsule. A joint capsule is filled with lubricating synovial fluid. The ends of the bones inside the capsule are covered with smooth articular cartilage that allows them to move against each other without grinding. Finally, outside the joint, synovial-fluid-filled sacs called bursas provide an extra measure of musculoskeletal cushioning. The tough outer layer of the joint capsule is made from another kind of cartilage, fibrocartilage. Some joints have special fibrocartilage shock absorbers inside the capsule—the labrum in the shoulder and hip, and the meniscus in the knee. In the spine, fibrocartilage makes up the disks, filled with mucoprotein gel, that act as shock absorbers between the vertebrae.

Do you already know what are the major joints in the human body? They are: the ankles, knees, hips, wrists, elbows, shoulders, and spine. 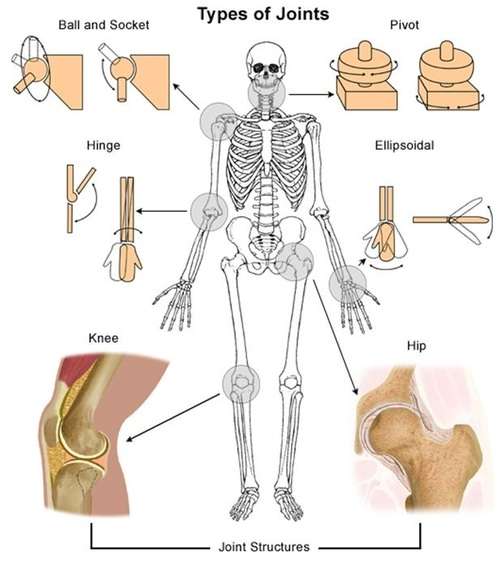 Muscles can’t move their respective joints without the help of intermediaries. Tendons connect muscle to bone, and ligaments connect bone to bone.

Therefore, you can easily imagine a tendon as a tough band of fibrous tissue that connects a muscle to a bone or other body part and transmits the force exerted by the muscle. Tendons are well suited for withstanding the tensile forces produced when muscles pull on bones. They are primarily formed from the inelastic protein collagen.

Ligament is also a strong band of fibrous tissue that connects bones to other bones. Ligaments are formed from collagen as well, but they also contain an elastic protein called elastin. The ligaments in the knee are the most numerous and also the most often torn.

Hence, the common denominator for all these structures, what really makes the system work, is collagen: a tough, rubbery, and altogether amazing material that is the building block of all the connective tissues in the body—cartilage and ligament, as well as muscular fascia and tendon. 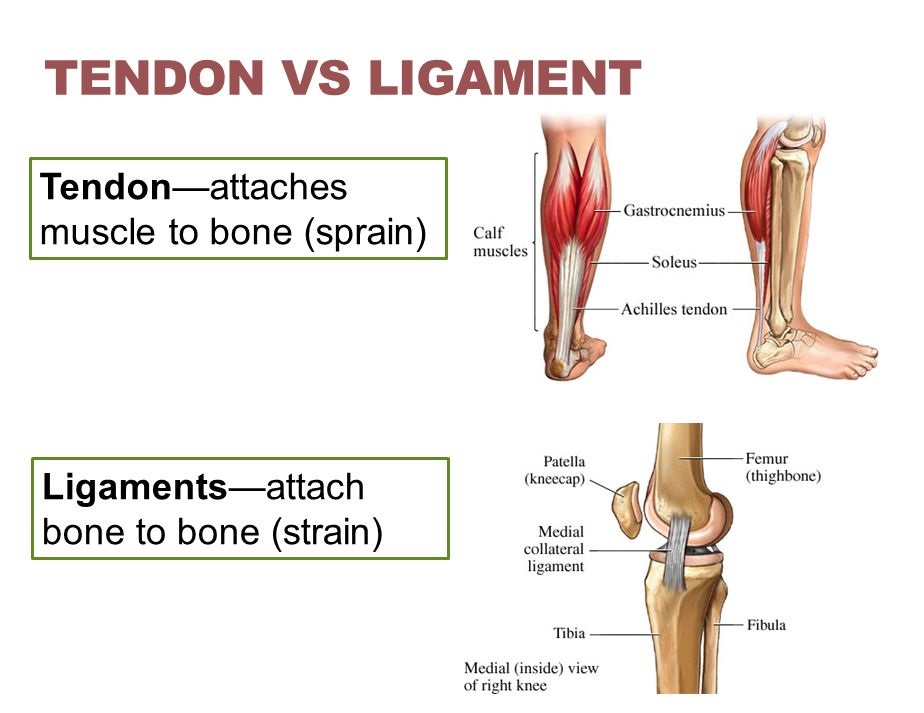 What are the five main functions of the skeletal system?

Apart from facilitating movement, the primary functions of the skeletal system include supporting the muscles, protecting the soft tissues and internal organs, the storage of surplus minerals and the formation of red blood cells in  the bone marrow of the long bones.

Fortunately, strength training increases both muscle mass and bone mass. Numerous studies have shown significant increases in bone mineral density after several months of regular resistance exercise. Interestingly, the rate of improvement in bone mass resulting from strength training is 1 to 3 percent, which essentially reverses the bone loss that would otherwise be experienced by non-exercising adults.

Like muscle, bone adapts to exercise by increasing in mass and strength. Weight-bearing exercises and resistance training are the best forms of exercise for increasing bone mineral density.

Can I somehow change my skeletal structure?

We would all like to have wide shoulders and narrow waist. Unfortunately, your basic skeletal structure cannot be changed. A naturally short midsection is determined by the distance between your ribs and pelvis, and can make the waist appear wider than it actually is. However, you can still improve your appearance by working the shoulders and abdominal muscles (particularly the obliques). This will create a narrower waistline and better posture.

The skeletal system is the body’s framework and is made up of bones and joints in two divisions: axial and appendicular. Movement and exercise are possible because skeletal muscles attach to bones, which are in turn connected at joints. The pulling of muscles on bones causes the bones to rotate. It is this combined functioning of muscles, bones, and joints that allows us to lift weights, run on a treadmill, and participate in a cycling class.

Stronger bones, muscles, joints, and connective tissue will make you more resistant to the acute injuries that occur during falls or during collisions with opponents, but the real benefits of weight training come in the prevention of the chronic shoulder, knee, and back pain that can make everyday life more difficult.