In this post we will show you how to do standing hip flexion using machine equipment. If your gym has a multi-hip machine, it is a good option for training the hip flexors and extensors (forward an backward motion of the hip). To perform standing hip flexion you can also use an elastic band, an ankle cuff weight, or an ankle cable attachment to increase the resistance (low-pulley cable hip flexion). Unfortunately, there are no obvious ways to adequately exercise them with free weights. Independent of equipment used, follow the same stabilization, alignment, and exercise range-of-motion principles as described bellow.

Despite their importance to a wide range of athletic and sporting activities, the hip flexors are the most neglected major muscle group in strength training. Maybe because they can’t be shown off like big quads and calves. Sure, they’re small and hard to notice, but they do play a part in your sprint speed and many other athletic activities. By contrast there is usually a great deal of emphasis on exercises for the leg extensors.

STARTING POSITION (SETUP): The starting position for this exercise is similar to the standing hip extension. However, depending on the design of the machine, you will now need to place your shin or lower thigh behind the roller, which you need to bring forward.

EXERCISE EXECUTION (ACTION): Lift the leg approximately 45-60% and then return to the starting position. Keep your knee almost fully extended and locked. Complete the desired number of repetitions. Once you have finished a set with one leg, move immediately to the other leg.

The most important muscles involved in hip flexion are the psoas and the iliacus, collectively known as the iliopsoas. Because they are relatively deep-seated rather than surface muscles they may have been overlooked by strength training athletes (bodybuilders) who have traditionally been the major innovators in strength training. 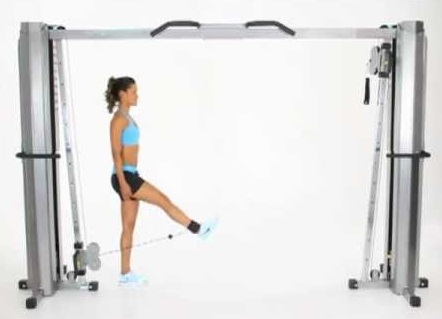 Most people do not consider working the hip flexors since they are not as visible as the buns, and they do not hold extra fat. But they are important for everyday function and should not be overlooked.