The anatomy and function of the respiratory system 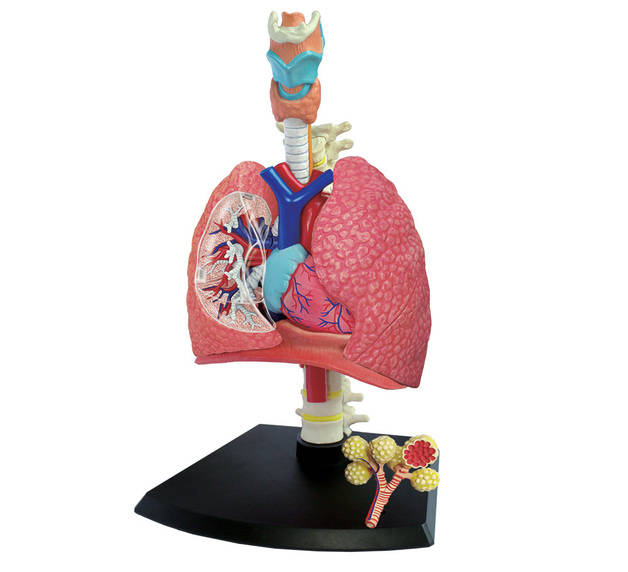 This article focuses on the structure (anatomy) and function of the respiratory system. How exactly this system responds and adapts to exercise will be the subject of the next article.

No one needs to be told how important the respiratory system (also known as the pulmonary or ventilatory system) is. All living creatures require oxygen and give off carbon dioxide. Oxygen is required for every cell in the body to function. The respiratory system serves the body much as a lifeline to an oxygen tank serves a deep-sea diver.

Think how panicked you would feel if suddenly your lifeline became blocked—if you could not breathe for a few sec­onds! Of all the substances that cells and therefore the body as a whole must have to survive, oxygen is by far the most crucial. A person can live a few-weeks without food, a few days without water, but only a few minutes without oxygen. Constant removal of carbon dioxide from the body is just as important for survival as a constant supply of oxygen.

The anatomy (structure) of the respiratory system

To get the oxygen your body needs, you inhale air through your nose (sometimes via your mouth). This air passes through a series of airways to reach the lungs.

This series of airways is referred to as the respiratory tract, and can be subdivided into two main parts.

Sometimes we simply say that the respiratory organs consist of:

Inhaled air passes through the chambers of this tract in the following order: 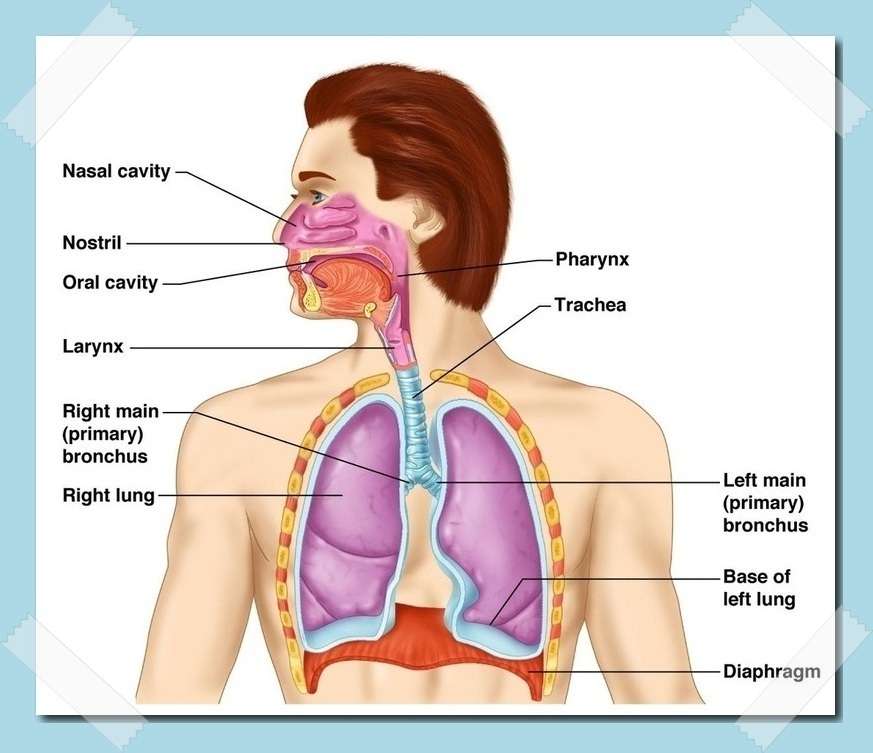 The nasal cavity is the air passage above and behind your nose. Air enters the body through the nostrils (external nares). Small hairs within the nostrils filler out dust and foreign particles before the air passes into the two nasal passages of the nasal cavity. The mucous membranes lining the internal nose moisten and filter the air. The plentiful blood supply in these membranes also warms the air.

Inhaled air passes through a pair of internal nares in the posterior portion of the internal nose. From these openings air enters the pharynx (throat). This muscular tube, about five inches in length, is lined with mucous membranes. It connects the nasal cavity and mouth to the larynx and oesophagus. It’s a passageway for food as well as air, meaning special adaptations are required to prevent choking when food or liquid is swallowed. In other words, here the food and air tubes cross each other.

The larynx contains the vocal cords and connects the pharynx to the trachea. It consists of nine pieces of cartilage, two sets of muscles and two pair of vocal cords. The vibrations of vocal cords produce voice. Skeletal muscles cause them to vibrate at different frequencies, determining the pitch of voice production.

The lower respiratory tract begins with the trachea – a tube about five inches long and one inch in diameter. The trachea or windpipe passes from the larynx to the level of the upper border of the fifth thoracic vertebra, where it divides into the two main bronchi that enter the right and left lungs. Its wall of smooth muscle is reinforced with rings of C- shaped cartilage (preventing the airway from collapsing).

Each lung is an elastic, bag-like structure that houses the remainder of the respiratory tract. The left lung is smaller than the right lung.

Most of the interior of the lungs is filled with microscopic air sacs called alveoli (sing., alveolus). The alveoli exist as clusters. You can easily imagine them as a tiny, balloon-shaped air sacs. Each one in a group receives inhaled air from an alveolar duct. The pair of lungs have an estimated 300 million alveoli. The alveoli are close to the capillaries of the pulmonary circulation. The thin walls of the alveoli consist of one layer of cells, simple squamous epithelium.

Alveoli are an important part of the respiratory system whose function it is to exchange oxygen and carbon dioxide molecules to and from the bloodstream.

What are the functions of the respiratory system?

The primary function of the respiratory system (also known as the pulmonary system) is to bring oxygen into the lungs and remove carbon dioxide from the lungs to the outside air (external environment). Therefore, this system of organs collects oxygen from the external environment and transports it to the bloodstream to ensure proper cellular function.

Other functions of the respiratory system include:

We need to be be very careful not to confuse respiration with breathing. Respiration is a much broader concept. The term respiration means the exchange of gasses (oxygen and carbon dioxide) between the atmosphere and the cells of the body. Therefore, respiration occurs at several different levels:

Mechanism of breathing. What happens when we breathe?

Lungs are not muscle. They cannot move of their own accord, nor are they under the control of the central nervous system. So, how do they move when we breathe in and out? The key to breathing is the diaphragm and the intercostal muscles between the ribs.

At the same time, waste products, e.g. carbon dioxide, pass out of the capillaries and into the alveoli. This process is known as gaseous exchange. Oxygen is picked up by the red blood cells and taken to the left side of the heart where it is pumped out through the aorta and around the body.

Interactions between the circulatory (cardiovascular) and respiratory system

This entire process is accomplished through the integrated functioning of the respiratory pump to move
air in and out of the body and of the respiratory passageways to channel the air. Therefore, the site of interaction between the two systems is the lung – this organ being responsible for the exchange of gases between them. The point is, without the respiratory system your blood would be useless. Any abnormality in either system will have effects on the other.

This 10 minutes video gives a simple and easy to understand explanation of how this important process of the human body works. It also shows the complete structure (anatomy) of both upper and lower respiratory track.

Summing up: The respiratory system

The respiratory system is vital to every human being. Without it, we would cease to live outside of the womb. Like the cardiovascular system, the respiratory system undergoes specific adaptations in response to a systematic training programme, which help to maximise its efficiency.