When we toss around the words “belly fat”, we’re actually talking about two different types: subcutaneous and visceral. While both types of fats store energy for your body to use, they are still very different. Without making things too complicated, this article will briefly explain all major differences between the two types of fat. 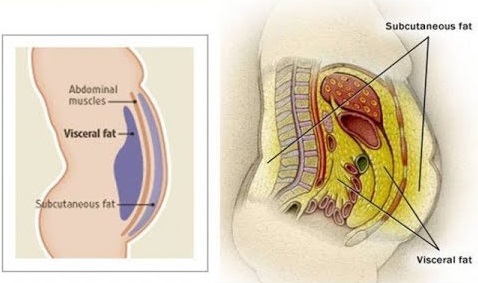 This type of fat is present all over the body just underneath the skin (between your skin and muscles). Subcutaneous fat is best, though perhaps not most scientifically, defined as the fat that you can see, the “inch you can pinch.” There are many different names for this type of fat. The apple shaped fat, android fat, beer belly fat, cardiac fat, central fat, paunch fat, mid-section fat, and truncal fat are just some of them.

This type of fat can appear just about anywhere, but the areas most recognizable are the hips, thighs, and especially the stomach. If we pinch the skin in different parts of the body, we can see that the thickness of the fold is different from part to part. On the back of the hands, for example, the fold formed by pinching the skin is very thin, as little fat is normally stored here. However if you pinch the skin on the belly you’ll probably see a thick fold there. That’s because we are genetically designed to store a large quantity of fat in this area. 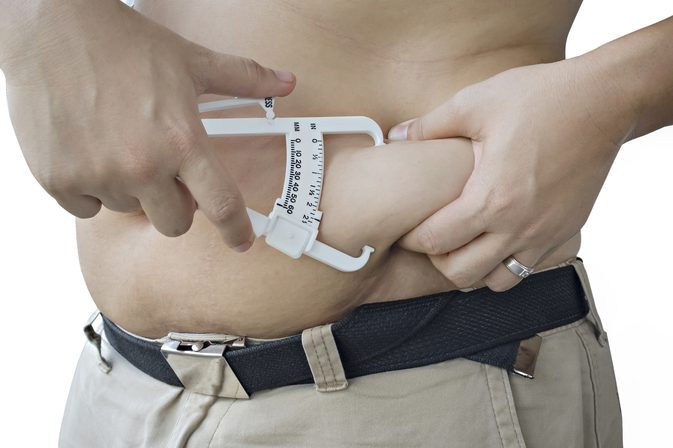 A moderate amount of subcutaneous fat is essential for life. If nothing else, it keeps you from freezing to death in the winter. But too much of it causes dissatisfaction with how we look and serious health problems. Excessive amounts of subcutaneous fat function as a visible sign of being overweight or obese, which raises your risk for many diseases. Therefore, don’t forget to measure your body fat using one of the existing methods.

But we have some great news: Subcutaneous fat responds immediately to proper diet plan and a solid exercise regimen.

Visceral adipose tissue is the second area where fat is stored. It develops on top and around our visceral organs, like the intestine, heart, liver, kidneys and so on. Visceral fat is nearly impossible to spot from outside. Therefore you can’t see or pinch visceral fat (often called “hidden” belly fat) as it lies underneath subcutaneous fat. 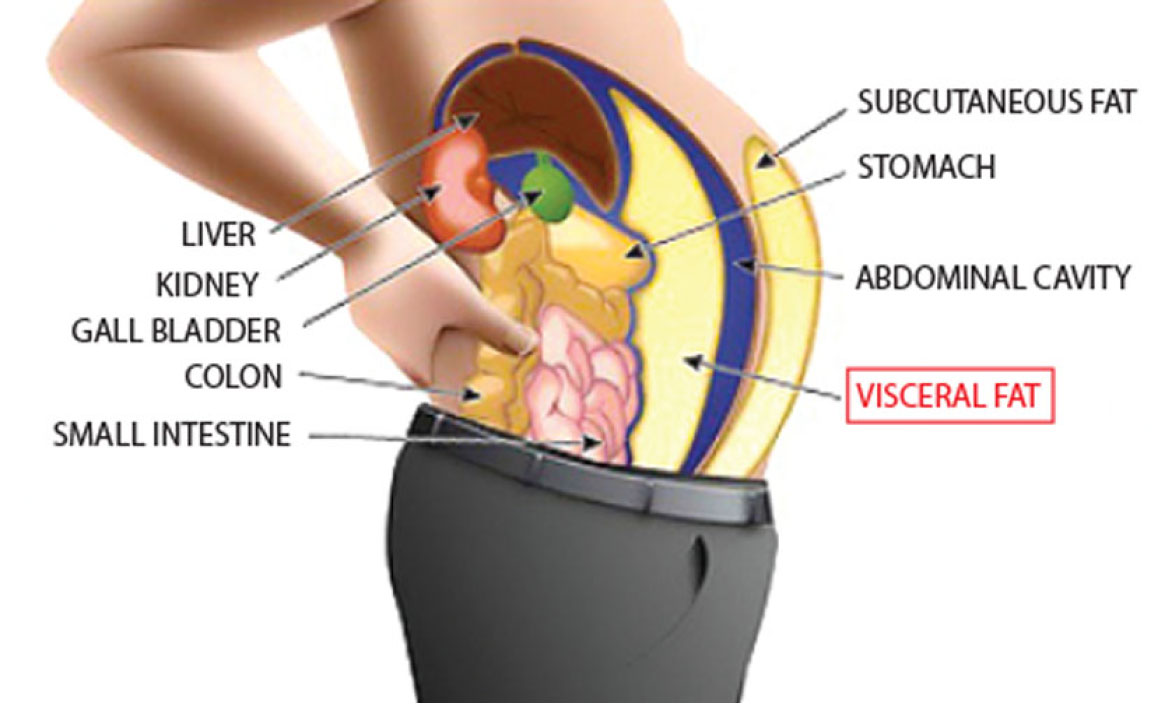 Complex equipment is necessary to measure the quantity and distribution of this fat. The only way to definitively diagnose visceral fat is with a CT or MRI scan. However, these are expensive and time consuming procedures. Instead, medical providers will typically use general guidelines to evaluate your visceral fat and the health risks it poses to your body. Harvard Health, for example, says that about 10 percent of all body fat is visceral fat. If you calculate your total body fat and then take 10 percent of it, you can estimate your amount of visceral fat.

Some people have hardly any subcutaneous fat, but a large quantity of visceral fat. That means they are fat, but they look thin. We are fat even when we look thin! Great!? Wrong! Therefore, never think that you are thin just because you appear thin.

Why is visceral fat much worse than subcutaneous fat?

Modern Bodybuilders have protruding bellies, why?

That protruding belly could be related to visceral fat. The quantity of fat stored there is determined by our genes. This is why some people, despite a good quantity of fat deposited in the subcutaneous area of the belly, manage to have a relatively flat stomach.

While excess fat is never a good thing, subcutaneous fat, particularly around the hips and thighs, is not particularly dangerous. In fact, a study published in the New England Journal of Medicine in 2004 found that liposuction removal of subcutaneous fat (up to 23 pounds of it) in fifteen obese women had no effect after three months on their measures of blood pressure, blood sugar, or cholesterol. So while a muffin top might not be on your list of fashion do’s, it’s not high on the list of health dont’s.

Visceral fat, often referred to as “deep fat,” is energy-storing white fat that wraps around the inner organs. For this reason it’s very hard to remove surgically and incredibly dangerous. 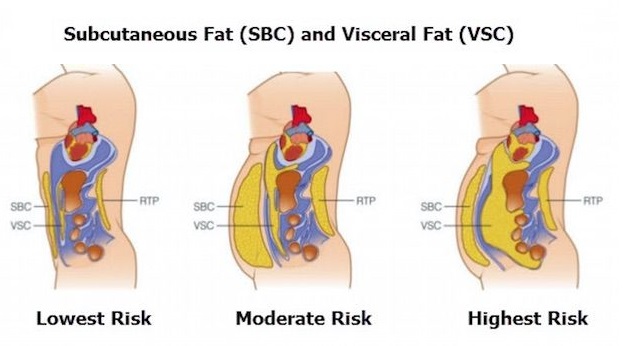 One reason excess visceral fat is so harmful is that its blood flow drains into the liver via the portal vein. In other words, all the toxins and fatty acids given off by visceral fat are swept up by the blood and dumped into the liver, negatively impacting the production of blood lipids (cholesterol).

Visceral fat in excess is metabolically active and can harm your health in several ways:

Regardless of where the body prefers to store fat, in the visceral adipose tissue or in the subcutaneous adipose tissue, one thing is clear! We are fat because we absorb energy in excess! One way to keep the energy intake low is to avoid fattening food.

From this table it becomes easier to understand why a diet associated with exercise is much better than a diet alone.