The superman exercise is an awesome core exercise if performed properly. An alternative to the superman is the prone cobra. The action is the same except that your arms are next to your sides rather than overhead. The prone cobra also strengthens and stretches the core.

The superman exercise starts with a dynamic contraction to get to the superman position and then requires strong static stabilization to maintain the hold.

Lie prone (facedown) on the ground with the arms stretched forward in front of the body, palms down, and the knees slightly bent and shoulder-width apart. While simultaneously contracting your glutes, hamstrings, and shoulders, lift your arms and legs off the ground, hyperextending at the hips and not just the spine. In other words, target the glutes and hamstrings in addition to the spinal erectors. You should be balanced on your midsection and forming an exaggerated position that resembles Superman flying. Hold the top position briefly and then lower the body to starting position. 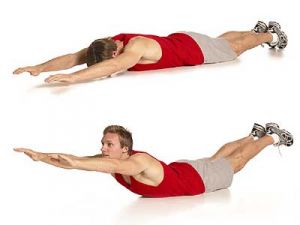 The prone cobra also starts with a dynamic contraction to get to the prone cobra position and then requires strong static stabilization to maintain the hold.

Lie facedown on the floor with your legs straight and your arms next to your sides, palms down. Contract your glutes and the muscles of your lower back, and raise your head, chest, arms, and legs off the floor. Simultaneously rotate your arms so that your thumbs point toward the ceiling. At this time, your hips should be the only parts of your body touching the floor. Hold this position for the prescribed time. (Note: If you can’t hold it for the entire time, hold for 5 to 10 seconds, rest for 5, and repeat as many times as needed. If the exercise is too easy, you can hold light dumbbells in your hands while you do it.)

These exercises improve your core strength, posture and balance control, and strengthens your upper back and shoulders. While the superman and the prone cobra are wonderful exercise for the low back, remember that they can also put considerable stress on the low back. If you have low back problems or weakness, progress slowly until the back muscles can handle the stress.