Training For An Endomorph

The three types of bodies into which all humans fit are endomorph, ectomorph and mesomorph. Some people fit ideally into these three body formations, but others may show a mix, although one body type is normally predominant. Consider how your body was as a teenager to best determine your body type before it was influenced by lifestyle habits.  It doesn’t make sense for a guy who’s low to the ground and built like a tank to do the same workouts as the tall drink of water without any bulk.

If you had to describe the endomorph body in one word, it would probably be “curvy.” The body fat in an endomorph tends to settle in the lower ab­domen, hips, and thighs. Keep in mind, though, that relatively few endomorphs (or other body types) possess all of the classic features; most men have a blend of different body types. Still, endomorphs do tend to lean in the bottom-heavy direction. 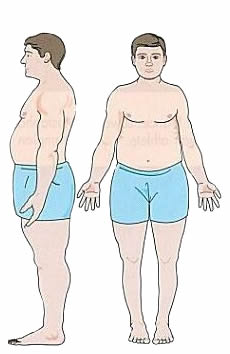 An endomorph typically has the capacity for high fat accumulation and storage. The shape is usu­ally pearlike: more weight in the lower regions and less in the upper body. More is involved in fat dis­tribution than aesthetics. Many research studies have shown that the fat deposits in the abdominal area are much more dangerous than fat in the legs or butt. Specifically, endomorphs with the classic fat pattern have a higher risk of heart disease, diabetes, stroke, hypertension, and some cancers. So the major concern of any endomorph is maintaining a healthful weight.

Endomorphs also tend to have limbs that are short in relation to the trunk and musculature that isn’t all that well defined. They generally have a large bone structure. This is good because it means they can hoist relatively heavy weight. But because they have a slower metabolism than other body types, it can be a challenge to lose fat, which can conceal their hard-earned muscle gains.

Eat smart. Since endomorphs metabolize calo­ries slowly and accumulate quite a bit of bulk, they should eat a relatively low-fat diet and keep carbohydrate intake in the low to medium range, but not dropping below 100 grams of carbs daily.

The main goal for an endomorph is burning off excess body fat. For his purposes, exercise should include several cardio sessions per week. Weight training should be performed at a fast pace with a higher range of reps.

Get the aerobic burn. More than most body types, endomorphs absolutely have to include plenty of cardio routines in their workouts. Apart from protecting the heart, it helps accelerate fat loss. The American College of Sports Medicine recommends at least 30 minutes of aerobic exercise daily, hitting the target heart rate of 60 percent to 75 percent of their top capacity.

Lift for endurance. Since endomorphs put on bulk easily, they should focus on lifting routines that build endurance rather than size. This usually means picking a weight that’s light enough that they can complete at least 15 repetitions per set and take relatively short rest breaks between sets.

To get the best workouts for this body type:

A word of caution: Endomorphs have a high risk of lower-body joint damage because they tend to carry quite a bit of weight higher up. They need to be especially careful to maintain perfect form when lifting, and to allow themselves plenty of warmup and cool down time, to protect the ankles, knees, and hips.