Many bodybuilders tend to neglect trapezius development, because small traps will give an illusion of greater shoulder width. Judges at important contests always look for thickness which only the traps can impart to the upper back. Relatively heavy trapezius musculature is essential for an impressive, muscular pose. 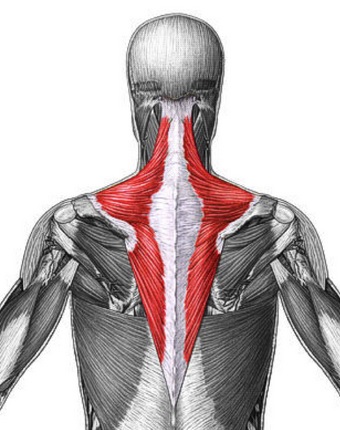 The traps are actually larger than the abdominals. If more men understood this, they might put a lot more work into trap training. A muscular trapezius is a great way to tell a weight lifter from somebody who does not lift. An evenly and well developed trapezius muscles can highlight and excellently finish off a physique and prevent shoulder and neck problems.

The muscle spans from the base of the skull all the way down the back to the 12th thoracic vertebrae. The muscle inserts on the shoulder girdle at the distal portion of the clavicle, the acromion, and the spine of the scapula.

Three Areas of the Trapezius Muscle

Anatomically, the trapezius is a single muscle.  Functionally, it is often treated regionally. The significance of this division lies in the variety of functions performed by this muscle.

FUNCTIONS OF THE TRAPEZIUS MUSCLE