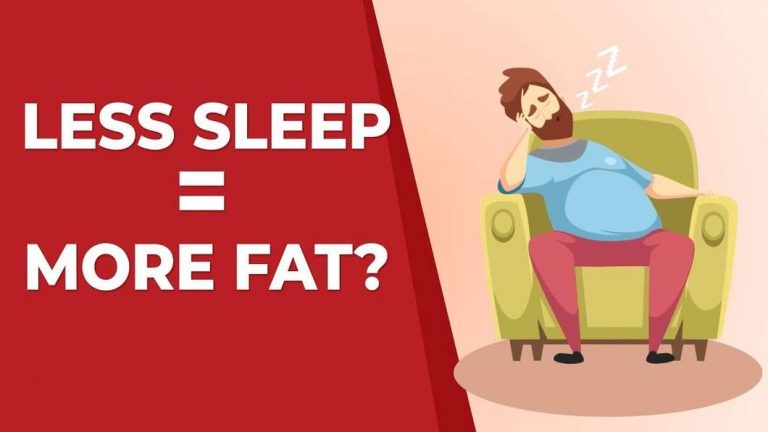 Have you ever wondered why you get a different result from other people who make use of the same approach? You try to get that perfect shape you dream of and still find it hard even when you’ve tried different diets, exercises, and tips. You eat the same meals; vegetables, lean protein, and avoid similar kinds of food. Well, maybe it’s genetics, but one thing that most people have always overlooked for a long time is the impact of sleep on weight loss.

If you’re already familiar with the importance of quality sleep for building muscles, it should be no surprise that the same is valid for weight loss too. When your body doesn’t sleep well, a number of problems can occur. In order to achieve high-quality and sustainable weight loss (fat loss), it is necessary to meet 3 prerequisites: a balanced diet, regular physical activity, and quality sleep. And while the first two factors in this calculation are evident to many, sleep is one of the most neglected components of the weight loss process. Yes, there’s an unbreakable connection between sleep and weight loss. Lack of sleep negatively affects weight loss.

Many people fail to meet the recommended amount of sleep of 7-9 hours during the night, and the long-term accumulation of lack of sleep has a number of harmful consequences on our health. A study by Kim et al. showed that a lack of sleep affects an increase in body fat, an increased risk of obesity, and affects how successfully you lose weight even if you are on a calorie-restrictive diet.

In today’s article, we highlight the key components (metabolism, appetite, food selection) of why sleep is so important and necessary for successful weight/fat loss.

When the body has not received a sufficient amount of quality sleep, ghrelin (the hormone that causes the feeling of hunger) increases, while leptin (the hormone that causes the feeling of satiety) decreases. Namely, the less we sleep, the more energy (food) the body needs to stay awake, and with an increased feeling of hunger, there is a greater chance that we will eat more food. Consequently, it is more difficult to ensure a caloric deficit.

In addition, studies have shown that people who slept more (and better quality) will consume more calories during the day than those who did not sleep enough. Finally, studies confirm that chronic lack of sleep (sleeping less than 7-8 hours regularly) is associated with an increased body mass index (BMI), which is a direct indicator of obesity.

Sleep is directly related to hormonal health and metabolism

Sleep plays a key role in the body’s recovery from daily activities, as well as illness. In addition, sleep is essential for maintaining the balance of hormones that are associated with the process of weight loss or weight gain. Not only does our body produce the aforementioned hormones ghrelin and leptin, depending on the amount of sleep, but sleep also affects the maintenance of the balance of insulin, cortisol, and growth hormones.

The amount and quality of sleep affect metabolism, especially sugar metabolism. After eating food, the human body releases insulin, a hormone that helps deliver glucose into the bloodstream. However, lack of sleep can negatively affect the body’s response to insulin, reducing the ability to utilize glucose (Schmid et al.). Although the body can recover from a few nights of sleep deprivation, long-term sleep deprivation increases the risk of obesity and type 2 diabetes.

Just one night of sleep deprivation (4 hours of sleep) is enough to cause an improper response to insulin, according to a study conducted on younger men (Sweeney et al.). In addition to the fact that people who sleep too little often choose foods rich in glucose due to increased appetite and an increased need to feel rewarded, the difficult use of glucose further worsens the situation.

Excess glucose (both from excessive intake and from a reduction in the ability to deliver it to the bloodstream) can be converted into fatty acids and stored in adipose tissue. In the long run, this is a clear path to obesity.

The goal of losing weight should always be the loss of excess fat while maintaining maximum muscle mass. Right? However, the amount of sleep directly affects how much fat will be melted and how much muscle will be maintained on a restrictive diet.

A study conducted by Nedeltcheva et al. showed that 5.5 hours of sleep per night for 2 weeks results in much less weight loss than sleeping 8.5 hours every night during the same period. At the same time, fewer sleep results in a greater loss of lean muscle mass.

In addition to changes in hormone status, lack of sleep has also been confirmed to have an impact on food selection and the way the brain perceives food.

A study by Marie-Pierre St-Onge et al. found that areas of the brain responsible for reward were more active in response to food after sleep deprivation (six nights of only four hours of sleep) compared to people who got enough sleep (six nights of nine hours of sleep). This explains why people who sleep less have a frequent need for snacks and prefer to choose carbohydrate-rich foods and sweet meals, compared to those who get enough sleep.

Physical activity can help the quality and duration of sleep

Also, studies have shown that physical activity can protect against metabolic imbalances caused by lack of sleep, improving the body’s response to insulin, which improves blood glucose control.

When was the last time you really got a bad night sleep? Can you recall how you felt when you woke up? You felt confused, exhausted, and dazed. In fact, you should have also felt a bit grumpy as well. Well, it’s not just your brain and body that had such an effect from inadequate sleep; your fat cells also experienced it too. When your body fails to get the required sleep, it experiences what is called “metabolic grogginess.”

This was a term that was coined by the University of Chicago researchers while they were analyzing what took place when people had four days of poor sleep. This is undoubtedly, something that frequently happens on an average busy week. Having one late night at work can lead to two late nights at home, and over time, you’ll be in sleep debt. Of course, it’s only four nights, so how bad could it be? It’s possible for you to cope well, especially when you remember that coffee does wonders.

Unfortunately, the hormones that control your fat cells are not feeling the same way. You need to understand that having deprived your body of sleep for four days, your body’s ability to make proper use of insulin (this is the master storage hormone) will be disrupted.

Actually, researchers from the University of Chicago discovered that insulin sensitivity was reduced by 30 percent. So, why is it really bad? While your insulin is working perfectly, fat cells eliminate fatty acids as well as lipids from your bloodstream thereby preventing storage. But the moment you become more insulin resistant, fats will begin to circulate in your blood and end up pumping more insulin.

Without adequate sleep everything pretty much sucks

When your body doesn’t sleep well your brain doesn’t function as it should. Did you know, for instance, that driving while sleepy can be as dangerous as driving while drunk? Also, your reflexes slow down, you don’t perform well on mental or physical tasks, you get irritable, and everything pretty much sucks. Beyond that, your body does its best repairing while you’re asleep. So if you’re not sleeping well, your body won’t repair well, and you won’t get optimal results from your training program or from anything else.

There is conclusive proof of a link between lack of sleep, weight gain, and obesity. Numerous major studies show unambiguously that if you do not sleep enough, you will gain weight and find it difficult to lose it. The links between insufficient sleep and obesity have been shown in population studies, clinical studies, and more recently in brain research. It is now clear that sleep is the missing link between traditional diet strategies and successful weight loss.

Despite this, many neglect the importance of sufficient sleep in the process of losing weight. They don’t seem to realize the importance of sleep in maintaining a perfect weight – which might even be the key to getting rewarded for all your fitness and diet efforts. Along with proper diet and physical activity, this is the third and necessary component for healthy and quality weight loss. Lack of sleep causes many imbalances in the body, from changes in hormonal status to poor food choices, which often results in weight gain and an increased risk of a number of diseases. Therefore, in addition to training and nutrition, you should pay enough attention to sleep and set aside 7-9 hours of sleep every day, which is a guarantee of maintaining health and a successful weight loss process.

Why Does Fat Loss Slow Down Over Time?