One of the biggest benefits of dumbbells is that they allow a greater or freer range of motion than the barbell counterpart. Since both hands can move in any direction, you can move your arms out to your sides a bit to better focus on the middle delts, or even bring your arms more to the front (think of the Arnold press) to better recruit the front delts.

STARTING POSITION (SETUP): Sit on a straight-back bench with your feet firmly planted on the floor while holding a pair of dumbbells. Begin the exercise by holding the dumbbells with your palms facing back (supination). 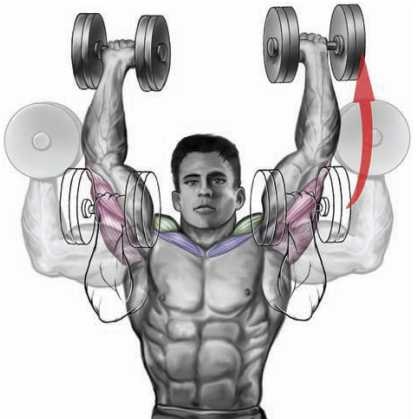 EXERCISE TECHNIQUE (MOVEMENT): During the press, rotate the dumbbells so your palms face together (neutral grip) at the midpoint, finishing the upward press with your palms facing forward (pronated grip) at lockout.

There are plenty of other alternative front deltoid exercises that do the same thing. Choose any other of the following exercises for building a massive deltoids.

Variable-grip dumbbell shoulder press will have slightly different effect on your shoulder and forearm muscles, and the twisting action mimics that od punching in martial arts.

The range of motion is much greater than when using the barbell. The contraction is also better at the top of the movement because the hands are close to each other when the arms are straight. The position of your hands is totally free, which makes it as natural as possible. In general, your thumbs are turned toward your head, but you can also turn them toward the back or the outside. Only dumbbells give you so many choices for your hand grips. The variable-grip dumbbell shoulder press is an excelent example of this grip diversity.