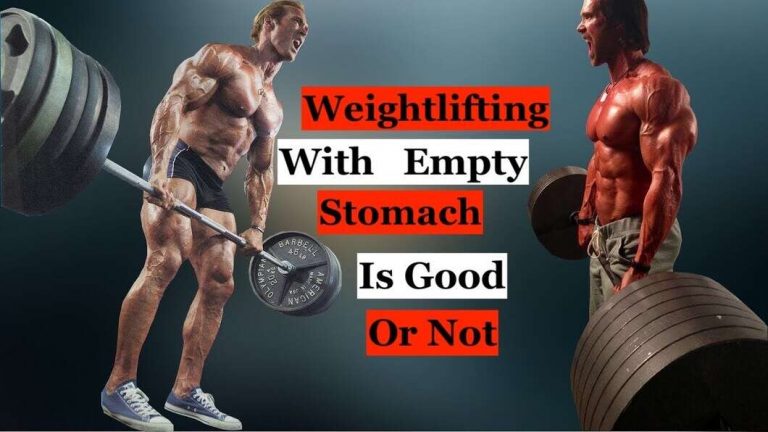 Is weight training on an empty stomach a good idea? Should you lift weights while hungry? It’s no secret that nutrition and bodybuilding are largely linked. The idea for this topic came as a follow-up to the last article “What does science say: Is breakfast really the most important meal of the day?” in which we dispelled myths about eating or skipping breakfast. One question that is logically asked is how skipping breakfast (or any meal for that matter) affects morning training (or any training during the day).

It’s important to note that here we are not referring to cardio training (fasted cardio workout), but to strength training (i.e. resistance exercise performance). Well, chances are that this is true and you probably will burn more fat if you work out (cardio training) on an empty stomach. However, you really shouldn’t be too concerned with burning fat during your weight-training workouts (lifting weights). We assume your main goal is muscle hypertrophy – increasing muscle mass.

We will look at three studies that together give us an interesting insight into the topic and from which we can draw practical conclusions. Given the common view that pre-exercise nutrition/breakfast is important for performance, we need to investigate whether breakfast (or any meal in general) influences resistance exercise performance via a physiological or psychological effect.

The first study we will look at was conducted by Naharudin and colleagues (2019) and their goal was to investigate how skipping breakfast affects weight training. They had 16 subjects with previous experience in training, and each of them participated in two experimental protocols. In one case, they had a typical breakfast, and in the other, they just drank water and trained on an empty stomach.

On the day when they had breakfast, the subjects did better training, i.e. they were able to do a total of more repetitions on the given exercises. The researchers also measured levels of hunger and satiety and the desire to eat, and these results were what we would expect depending on whether the subjects ate breakfast that day.

The researchers concluded that the difference in performance was probably caused by the fact that here breakfast provided more energy in the form of carbohydrates, which allowed for a higher training volume. However, the authors say that other possibilities cannot be ruled out, such as the psychological impact of eating breakfast and the very feeling of hunger during training.

Can a calorie-free placebo breakfast have a positive impact?

In order to try to answer the questions that remained open after the last research, Naharudin et al. (2020) designed a new experiment. They recruited 22 subjects with experience in weightlifting (resistance training), and this time each subject participated in three protocols. In each of the protocols, the subjects first had breakfast or only water and then trained two hours later.

There was no breakfast and the subjects only drank water in the first protocol.

In the second and third protocols, the test subjects received a viscous porridge for breakfast, which was obtained by mixing water with juice concentrate for dilution and xanthan gum to obtain a thick, semi-liquid consistency. That porridge itself had practically no energy value, i.e. it contained only ~29 kcal.

The only difference is that in the third protocol, they added a significant dose of maltodextrin to that mixture as a source of energy and carbohydrates, and the subjects were told that both mixtures contained the same amount of calories.

The results were very interesting! A real caloric breakfast and a placebo breakfast without energy resulted in equal outcomes and were convincingly better than just drinking water. This means that there was no difference in training performance regardless of whether the thick porridge contained carbohydrates/calories or not. Also, both breakfasts were equally effective in terms of satiety and hunger suppression – and both cases were better than water.

The authors concluded that it is likely that eating breakfast has a psychological effect on performance in morning weight training. So it’s not actually a matter of energy intake as they themselves thought after the research we went through earlier in the article. They also noted that differences in training performance were well correlated with feelings of hunger and satiety, so this cannot be ruled out either. This brings us to…

Is the feeling of hunger really what affects the training?

The last study we will look at was again conducted by Naharudin and colleagues (2022) to answer that last question.

The basic characteristics are similar to those in these earlier works – 16 subjects, and two different types of breakfast before morning training. Only this time they did not vary the nutritional composition of the meal, but the shape and texture. The common ingredients in both breakfasts are the same as in the earlier research. They again received a combination of juice for dilution, maltodextrin, and water.

The difference is that they added xanthan gum to the semi-liquid version of the breakfast in order to get a thick and viscous mixture that the subjects ate with a spoon from the bowl. The second variant did not contain this thickener, so the meal was liquid and the subjects just drank it. Now let’s go to the results.

Thick porridge reduced hunger better and provided a greater feeling of satiety than a liquid meal, despite the same amount of carbohydrates and energy. Also, training performance was better after consumption of the viscous meal, where subjects performed ~10% more repetitions during 4 squat sets.

The researchers conclude that this research provides new data suggesting that feeling hungry during training could have a negative impact on performance and quality of the training itself, at least in the case of weight training.

So things like the texture and consistency of the food we eat affect satiety, not just the total amount of calories and individual macronutrients. The form in which we consume food (liquid, semi-liquid, or solid) and how we eat is also important, not only what we eat.

The results suggest that breakfast/pre-exercise nutrition enhances resistance exercise performance via a psychological effect, although a potential mediating role of hunger cannot be discounted.

Training with weights on an empty stomach is not a good idea. While you may burn a little more fat during the workout, your cortisol will be higher and you will burn muscle tissue. Plus, your energy level will be lousy because of low blood sugar. Remember, you want to be energized and motivated to attack the workout so you create muscle damage. That’s a key component to ensuring the fat-melting side-effect of building muscle.

Conclusion and practical guidelines: Lifting weights on an empty stomach

Regardless of everything, it seems that it would be a good strategy not to train hungry (just to stay on the safe side), potentially even regardless of what time of day we train. The omission of a pre-exercise breakfast might impair resistance exercise performance in habitual breakfast consumers. Therefore, consumption of a high-carbohydrate meal before resistance exercise might be a prudent strategy to help maximize performance.

If you train in the morning, pay special attention to this. In case you feel hungry before/during training, try to eat at least something that will fill you up. If you don’t really feel any hunger and feel great, you can probably continue training without breakfast if that’s more convenient for you. In that case, we definitely recommend that you eat a fair protein meal as soon as possible after training to allow the muscles adequate recovery and progress.