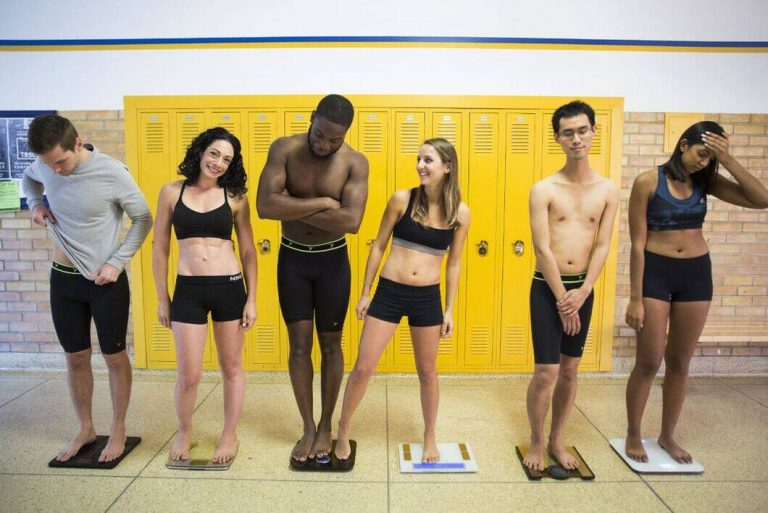 Weight is important – don’t get us wrong. But because of our weight-obsessed culture, the numbers on a scale can easily become the only measure of success. It becomes too tempting to monitor your progress by regularly hopping on a scale. This is not a reliable indicator of fat loss, which should be your primary concern as you start to lose weight. Avoid the potential depression, guilt, shame, or hopelessness by putting your scale away temporarily; rely more on an old-fashioned tape measure, a pair of old jeans, a food journal, a monthly body fat percentage measurement, and committing to only weighing yourself once a month.

A scale will always succeed in telling you how much you weigh at any given time. However, if you don’t understand what a scale truly measures it can be quite a misleading tool. Here’s an example. You’ve been consistently lifting weights and doing cardio every day for six weeks. Finally, the day to measure your progress arrives. You jump on the scale and to your utter dismay and frustration, you observe that you’ve not lost a single pound. How can this be? You’ve been eating perfectly and you’ve followed your prescribed exercise program perfectly. This scale can’t possibly be right; this scale lies! Unfortunately, a good scale doesn’t lie. However, you don’t understand the background behind these numbers. And this is main cause of your problem.

The main purpose of this article is to briefly explain why the scales don’t give you the full picture, or even better to say, why the numbers on scales are totally irrelevant.

1. WEIGHT CHANGES FROM DAY TO DAY (EVEN FROM HOUR TO HOUR)

The number on the scales depends on many factors – time of the day, water retention, type (and amount) of food eaten, training, hormones. So, as soon as something depends on so many factors, we really can’t tell that we can make some valid conclusions based on that information, especially if we feel bad about those same conclusions.

2. MUSCLE IS HEAVIER THAN ADIPOSE TISSUE

You’ve probably heard this argument before, but repetition is the mother of knowledge. Muscle is simply much heavier than adipose tissue. What does that mean? If you exercise and build muscle mass, the number on the scales will not decrease. Moreover, in some cases it will grow. There is no need to rely on a number when you can clearly see the changes in your body when you look at yourself in a mirror (read: the muscles that are outlined and the way your clothes look). If your clothes are looser but the scale is the same, this is because of the lean muscle you have built.

Therefore, for those who really want to track the results, it makes more sense to measure the circumference of individual body parts with a classic tailor’s meter. In fact, young males can go from flabby to ripped with a full-on 6-pack while the number on the scale increases, not decreases.

When we say we want to lose weight, we mostly mean fat loss. However, it should be borne in mind that weight loss does not necessarily mean fat loss. First of all, in the beginning of some diet you will mostly lose excess water. Fat loss is much harder to achieve and requires a comprehensive and “smart” approach. In addition, with large restrictive diets (and poor selection of macronutrients) you will lose muscle mass, which is another argument in favor of the thesis that the number on the scales can easily deceive us. In short: The scale can’t tell you what you’ve lost. It can only tell you how much you have lost.

In other words, you can lose scale weight simply by starving yourself for a day or sitting in a sauna for an hour. This of course doesn’t mean that you have lost fat, which is probably what you desire to lose. The scale doesn’t differentiate between muscle and fat. Therefore, if you’re losing fat while adding muscle, which should be your desired goal, the scale won’t reflect your fat loss. Thus, if you lose five pounds of fat but gain five pounds of muscle, the scale will show no change in weight. Does this mean you’ve not progressed? Of course you have, but you would never know if you only gauge your progress by the scale.

4. THE NUMBER ON THE SCALES DOES NOT INDICATE THE LEVEL OF HEALTH

Being thin does not equate to good health. One of the common misconceptions is that weight loss or lower body weight also means health. That, of course, is not the case. While there are higher risks for heavier people categorically, thinner people should not assume they are immune to health issues. Simply remember skinny-fat people – people who are skinny-fat may be thin, but they have no muscle tone and a high percentage of body fat.

Health depends on a number of factors and your body weight may be just one indicator (among many others). Adopting healthy living habits such as proper diet, regular exercise, enough sleep, etc. will generally affect a number of health determinants such as blood pressure, blood sugar, cholesterol, and ultimately improving health. However, improved health may not change the number on the scale. Instead, of checking your weight, check out your numbers for blood sugar and blood pressure and cholesterol and triglycerides.

In the end, constant weighing can only harm your mental health. It’s normal to feel disheartened when your weight is up and happier when the number is down. However, this is a slippery terrain and in an instant, before you know it, your “ordinary” weighing can turn into an obsessive action. The burden of numbers on the scales will direct your focus from the most important thing – how you feel and whether your current condition suits you. That is why it is best to dedicate yourself to achieving a balanced lifestyle based on taking care of yourself and your health, proper nutrition, exercise and mental hygiene.

6. THE SCALE DOES NOT RECOGNIZE RATIO OF FAT TO MUSCLE (BODY COMPOSITION)

Here’s another example of scale deception. Two men each weigh 180 pounds. However, one man has 15% body fat and the other man has 35% body fat. Do you think that these two men will look anything alike? Not a chance. We can assure you that if seeing these two men side by side, you would probably guess that the man with only 15% body fat weights at least 20 pounds less than the man with 35% body fat. Despite the fact that both of these men share the same number on a scale, their body composition (ratio of fat to muscle) is significantly different.

Think about it. Does is really matter what you weigh if you’re happy with the way you look and feel? Losing fat is not just merely the numbers you see on the weighing scale or your BMI. A scale measures not only fat but also muscle gain, water, food, intesti­nal contents, the coffee you drank just before weighing yourself, and so on. The scale often gives irrelevant information. Your waist circumference or a “loose pant” is a better indicator of excess fat in your body. What you really want to monitor is your body composition to ensure that you’re losing extra fat and not lean body mass. A regular scale won’t be able to give you any indication of this. Only by measuring your body fat percentage you can tell are you gaining muscle and losing fat, even if there’s no change in the number on the scale.

For example, if you increase your exercise program, decrease your food intake, build up muscle, and lose fat, the scale may indicate that your weight has remained the same. You will feel thinner, look thinner, and your clothes will be looser, but you will not gain any psychological rewards if you depend on the scale.

Even so, people get incredibly discouraged when the number on the scale doesn’t change or even goes up. Therefore, it doesn’t matter what number is on the scale as long as you look good! Again, don’t play the numbers game!