A flye movement is when the arms are bent and are drawn across the front of the upper body in a hugging motion. Performing a decline fly means lying on a a bench where your head is below your knees. Using the decline bench to perform the dumbbell fly exercise focuses more on the lower portion of the chest and front portion of your shoulders known as the anterior deltoid.

The dumbbell fly is not an ego lift. The purpose of the movement is to overload the pecs through the principle of isolation. Isolation movements have fallen out of vogue with some so-called functional training experts. This is a mistake if the objective is to maximize muscular development or even create a balanced physique.

STARTING POSITION: Set an decline bench at a 30- to 40-degree angle. Grab a pair of dumbbells and lie on your back on a decline bench. Secure your feet under the ankle pads. To start, raise the weights directly above the lower half of your chest so that your arms are nearly straight (elbows slightly bent), your palms face each other and the dumbbells touch.

EXECUTION (ACTION): Keep your elbows bent slightly throughout and begin lowering the dumbbells out and down to your sides in an arc. When your upper arms are in roughly the same horizontal plane as your torso (your upper arms are parallel with the floor), your palms should face the ceiling. Raise the weights back up in an wide arc, retracing the path of descent. Squeeze the weights up and together by forcefully contracting your chest muscles. Try making a big hugging-type movement without bouncing at the bottom.

In contrast to incline flyes, it is the lower fibers that do most of the work in this exercise.

In theory, this lower chest exercise (just like the flyes performed on the flat and incline bench) helps the expansion of the chest, especially in young athletes who are still growing. The gains are less for older people, although there is evidence that dumbbell flyes may elongate the intercostal cartilage. In reality, it is almost identical to the decline bench dumbbell press, at least with regards to the pectoral muscle.

People tend to gravitate towards flye movements because these types of exercises allow them to “feel it more in the muscle”. Flyes are an isolation exercise and when performed intensely they seem to produce a more focused effect on the chest muscles because of their isolated nature.

Even though flyes may feel like they’re hitting your chest really hard, the isolated, unchallenging nature of these movements produce only a fraction of the overall anabolic effect that heavy pressing movements will produce.

Flat and decline flyes are great for building the outer chest and for carving that clean line that separates the chest from the torso. 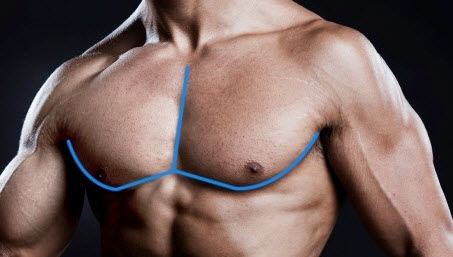