This is another very important lesson about functional muscle anatomy. In this post you will find out everything you need to know about the functional anatomy of the posterior deltoid muscle – shape (appearance), function (muscle action), location, insertion, and origin.

The shoulders refer to the deltoid muscles found on top of the upper arm. There is one deltoid muscle in each of your shoulders. The deltoid is the muscle with three different heads: anterior (red color), lateral (green color), and posterior (blue color). Each head raises the arm in the direction for which it is named. All three heads must be fully developed for the shoulders to be considered outstanding.

The deltoid is a single-joint muscle because it crosses only the shoulder joint. On the other hand, because of its various heads, you can work this muscle from plenty of angles by raising your arms in front of you, overhead, laterally, and posteriorly.

Besides the deltoids the shoulder muscles also include the trapezius (the traps). In our previous anatomy posts we mentioned that, while they are technically part of the back musculature, most bodybuilders train traps with their shoulders.

The posterior division, also known as the posterior deltoid, is located on the backside of the shoulder joint. Posterior simply refers to a position on or toward the back of the body. You should be very careful not to mix them with your rhomboids. Rhomboids are set between your two scapula bones. Unfortunately,  posterior deltoids  (the ones you can’t see in the mirror as you can your front or middle delts) are often so underdeveloped in many people that you’d a need a microscope to spot them.

As you can see from the image, this head is also somehow triangular in appearance. The other two deltoid heads have also even more triangular shape.

The posterior (rear) deltoid is involved in:

This head od the deltoid muscle is highly involved in the backhand stroke in tennis, a spinning backfist strike in mixed martial arts, rowing, or even a Frisbee serve.

The rear deltoid starts on the shoulder blade (or, rather, on a diagonal spine that protrudes from the cuts across the top third of the scapula). In other words, it arises from the lateral aspect of the spine of the scapula and inserts into the deltoid tubercle of the humerus.

While your rear deltoid is typically thought of as a shoulder muscles, it’s actually emphasized by many of the exercises that work your upper back. That’s because its job is to pull your upper arm backward, a movement that you perform whenever you do a rowing exercise.

Other Names for Posterior Deltoid

In bodybuilding anatomy, this part (section) of the deltoid muscle is also known by these terms:

In most people there is an imbalance between the front of the shoulder (overtrained) and the back of the shoulder (undertrained). Scientific studies have measured this imbalance. Compared to sedentary people, athletes with a good level of fitness have the following features:

Pulled forward by a strong front deltoid and not counterbalanced by a sufficiently powerful back of the shoulder, the shoulder joint moves forward. This creates a hunchback appearance. Aside from aesthetics, the shoulder joint is no longer where it should be. This opens the door to several problems.

The rear delt is the part of the delt that is most often neglected. Few exercises target the rear delt, and you can’t see it looking in the mirror as you can your front or middle delt. The rear deltoid does receive some stimulus when you train your lats. However,  you should target it with a specific exercise (below is the list). When training your back, the rear delts are most emphasized by having a wide grip and keeping your elbows up as opposed to tucking them in next to your body. You will be weaker in this position, but it will hit your upper back more effectively. 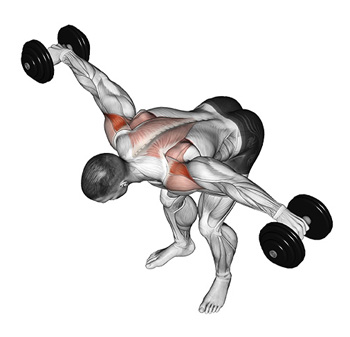 All exercises listed above target the posterior deltoid directly. However, there are other movements that train the rear delt indirectly. Examples of such movements include horizontal pull (row exercises) and vertical pull (lat exercises).

To take pressure off the lower back when performing a rear deltoid raise, the person can sit (or lie face down) on the end of a bench with the dumbbells under the thighs and then bring the dumbbells out laterally until the arms are parallel to the floor.