Can we change the shape of our muscles using certain exercises or by varying the angle at which we train certain muscle?

What can you expect from your bodybuilding efforts? There are many positive effects of weight lifting. Bodybuilding can help you tone your muscles, improve your health, appearance and fight age-related muscle loss. The possible benefits are almost countless. However, you have to understand that some genetic characteristics (factors) are predetermined and are not subject to change, for example, your height or the color of your eyes. Therefore it’s legitimate to ask is it possible to change the shape of your muscles by performing certain exercises or by varying the angle at which you train certain muscle? The purpose of this article is to explain one of the most misunderstood topics in bodybuilding.

Can we “shape” our muscles with certain exercises?

One of the most misunderstood topics in bodybuilding is the belief that there are some exercises that shape or define the muscle and others that bulk it up. Unfortunately, the shape or form of a muscle is genetically predetermined and cannot be altered. Therefore there’s no such a thing as “shaping exercises.” But that doesn’t mean that your physique is predetermined. You need to look at yourself the way an artist would and decide where do you need more or less “clay”, as Arnold put it in Pumping Iron.

Just to give you an example, we usually consider bench press to be bulk exercise for the chest. On the other hand, cable flyes we usually see as a shaping exercise. While performing either exercise, however, the pectorals simply contract and relax. So where does this notion come from?

Most likely, it occurs that heavy benching is done in the off-season, when people are stronger and bigger. During a diet, especially when an athlete is eating fewer carbohydrates and therefore has less energy, many athletes don’t have the strength to perform heavy bench anymore so they resort to cable flyes for a chest workout. Since they are leaner, they conclude that the cable flyes must have done the trick, not the dramatically reduced calories and increased cardio.

So are all exercises created equal?

When training a muscle it is necessary to perform a mid range or power movement and follow that up with a stretch exercise.

As an example, for the chest, one would do incline presses followed by dumbbell flyes with an emphasis on the stretch. The big exercise involves a lot of other muscles such as the triceps and the shoulders and forces the body to release growth hormone during the workout. Following with a stretch motion, the athlete creates tissue tears, which will enable further muscle growth. The body needs to repair those tears, which consumes a lot of energy (fat loss) and makes the muscle stronger (muscle gain) depending on your caloric intake. 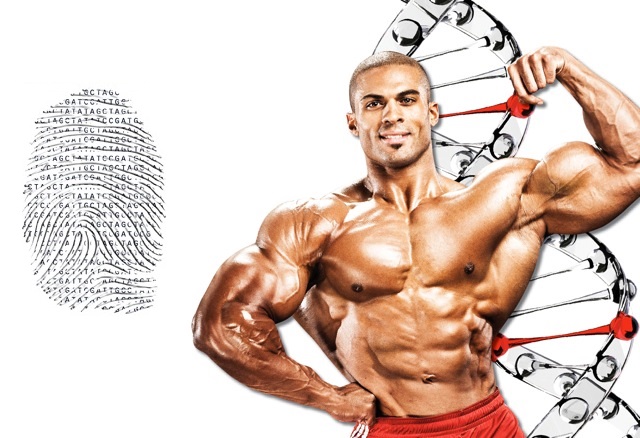 What about varying the angle at which we train certain muscle?

There’s also a popular though erroneous belief that by varying the angle at which a muscle is trained, the trainee will some­how be able to direct the stress imposed to specific areas of a muscle and can thereby “shape” the muscle being trained.

This belief has absolutely no basis in fact. The reason is the way a muscle is innervated. The nerves that enter a given muscle divide out into threads that resem­ble branches on a tree. Each branch ends at the muscle cell and carries the electrochemical current that causes each muscle cell to contract. When this current is released, all of the cells serviced by the branch (a single neuron) contract simultaneously (the all-or-none law of muscle fiber contraction), not some to the exclusion of others. It’s simply not possible to isolate one portion, bor­der, or ridge of a muscle.

Muscle shape is a function of genetics. That’s why the “muscle shaping” advocates can’t perform an exercise to make a biceps muscle look like a triangle, a hexagon, or Mount Rushmore.

Looking at it another way, suppose a sixteen-year-old had a crystal ball into which he could look to see what his muscles would look like when he is a maximally muscular twenty-one-year-old. He would see much larger, bulging muscles, but the look and shape of them would be as preordained as the shape of his nose or ears. He could train any way he wanted over the next five years, but his muscles would end up looking exactly like the ones in the crystal ball. There is no other choice. He could train with one set, ten sets, full range, strong range, isolation movements, compound movements, rock lift­ing, weight lifting, etc. But when he was at his maximum muscularity, his muscles would look the way they were programmed to look when his father’s sperm hit his mother’s egg.

Is muscle toning also a myth?

While shaping is a myth, sculpting best describes what is actually possible. You can first build your muscles and then reduce your body fat percentage, which will give you that thin, athletic “beach body” that so many men and women envy.

The key takeaway here is that you can work out your muscles in such a way as to achieve full development, but in the end, your genetics will have the final word about the overall shape your muscles.

Toning, by media standards, is the combination of losing fat and gaining muscle. They don’t always occur at the same rate, so you can’t have high expectations that you’ll be able to achieve this two goals at the same time in some great extent. You most definitely cannot target specific areas for toning either. Sadly, we don’t lose fat evenly all over the body. People have “trouble spots” for a reason. They’ve accumulated the most fat there, and have great difficulty losing it. So if you’re losing body fat, the first places to lose fat are often the places that don’t have much fat to lose.

Closing thoughts about changing the shape of our muscles

Your genes determine many important pieces of the muscle building puzzle. The shape of your muscles (their length, structure, and where they attach) is just one piece in the puzzle. There is no way you can alter the shape of your muscles by performing certain exercises. There is no such a thing as bulking and shaping exercise.  Also, you simply can’t change the shape of a muscle by varying the angle at which you train that concrete muscle.

So don’t waste your precious time trying to shape a muscle into something it cannot become. Al you can do is to make your muscle larger (through progressive intensity), smaller (through lack of use), or stay the same (through no change in intensity). In other words, your muscles can grow bigger in size and they can shrink, but they cannot magically lengthen or become rounded. Of course, stretching can change the tightness of muscles, but that does not change the shape. As much as a rhino wants to be a unicorn, it can never be a unicorn. But it’s still a rhino, and that’s pretty freaking cool.