EZ-bar lying triceps extensions, also known as skull crushers (because you bring the bar close to your head), are a strength exercise used in many different forms of weight lifting. This is a basic, heavy isolation exercise (within limits) for all three heads of the triceps. We advise you to perform this great triceps exercise by using an EZ bar in order to reduce strain on your wrists. The zigzag design of the EZ bar provides a natural grip without any significant change in muscle effort.

STARTING POSITION (SETUP): Lie faceup on a bench with your head, back, and buttocks in contact with the bench and your feet flat on the floor. Take an E-Z curl bar or straight bar with a narrower (hands approximately 15 cm apart), palms down (overhand) grip and hold it straight above you. To be even more precise, your arms should be completely straight but angled slightly back toward your head, rather then fully vertical (this is not shown on the image). This angle makes the exercise harder for your triceps (since they’re starting in a pre-stretched position) and easier on your elbows. 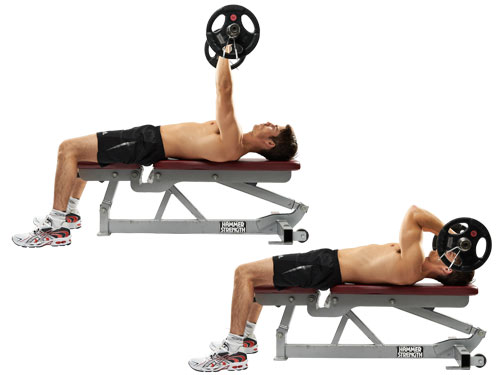 MOVEMENT (ACTION): Keeping your upper arms completely stationary all the time and bending only at the elbows, lower the bar to your forehead. Pause, then push the weight back to the starting position, keeping your upper arms in the same position throughout the movement. Keep your elbows in during the entire range of motion. When you complete the set, allow the spotter to take the bar from your hands.

EZ-bar lying triceps extension targets your triceps brachii. Your upper back and rear shoulders (posterior deltoids) come into play, too, since they keep your shoulders stable as you perform the movement. 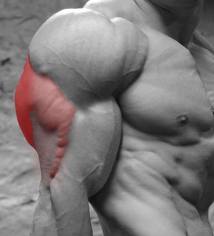 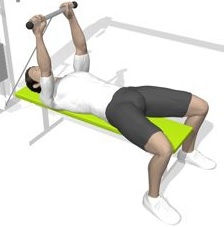 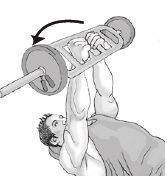 You can perform triceps extension in a seated position or while standing upright if lying position doesn’t suit you.

Furthermore, there are numerous alternatives that can be done on various forms of equipment, such as dumbbells, cables and machines.

EZ-bar lying triceps extension should be practiced with good control because overhead lifts can be dangerous if the weight slips. It is not called the skull crusher for nothing. Therefore, begin this triceps exercise by using lighter weights and a spotter. Also, keep your movement under close control and slow the descent of the bar as it nears your head.

There is no other exercise we can think of for any body part that is as well known for causing elbow pain as skull crushers are. Most of the people doing skull crushers are already smart enough to be doing them with an E-Z curl bar. But yet, it still hurts their elbows (and maybe their wrists as well). If this describes you, then we highly recommend using dumbbells instead. When you grab them with a neutral/hammer grip you’ll probably feel a significant improvement in wrist comfort, and it will probably feel a lot better on your elbows as well. 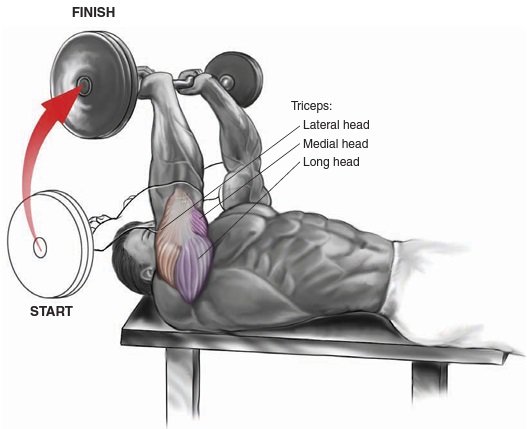