Zottman curls offer a terrific bang for your buck. Basically, you are performing a regular curl with an eccentric overload reverse curl, blasting the biceps and forearms into oblivion. This exercise was named for George Zottman, the early American strength athlete who invented the movement. With Zottman curls, you can equally stress your biceps, brachialis muscles, and forearm supinators.

Zottman curls aren’t commonly done today, but they’re very effective for forearm development. At the beginning of the exercise, you work the muscles on the bottom of your forearm. After you rotate your wrist, your upper forearm muscles come into play. You can lift one arm at a time for several reps or you can alternate arms as you do each rep.

Furthermore, you can do the Zottman curls seated on a flat exercise bench or standing. You can also try it seated on an incline exercise bench to extend the range of possible movement. Either way, keep your elbows close to your sides and your upper arms stable.

STARTING POSITION (SETUP): Position yourself as you would for a seated or standing biceps curl. Begin in a standing position, feet at hip width, with a pair of dumbbells at your sides and elbows close to your torso. Arms should be straight and palms facing away from you (underhand or supinated grip – palms should face forward). 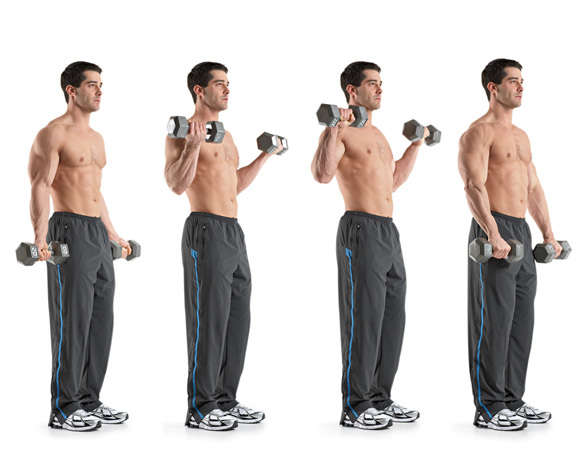 EXERCISE EXECUTION (MOVEMENT): Without moving your upper arms, curl the dumbbells up toward your shoulders.  After squeezing your biceps at the top, turn your hands over so your palms are facing away from you (pronated grip). In other words, at the top of the movement, rotate your wrists outward so your palms face forward again. Lower the weight to the starting position using a pronated grip, taking care to resist gravity on the way down. At the bottom position, switch back to original supinated grip. Repeat for prescribed number of repetitions.

All two versions are very similar as far as their muscle focus; try them all to discover which one is the most comfortable and works the best for you.

The Zottman curl strengthens all of the elbow flexors, including the biceps, brachialis, and brachioradialis, which are crucial for elbow health in a program focused on improving bench-pressing strength. In other words, with standing Zottman curls, you can equally stress your biceps, brachialis muscles, and forearm supinators.

Wherever a certain type of exercise is used in a workout, any one of the same type can be substituted. Try these other great forearm exercises.

If you are bored with the basic bicep curl try this variation, which also places a bit more emphasis on your much neglected forearms.

By allowing you to overload the eccentric (lowering portion) of the lift with more weight than you could usually use for a full reverse or pronated grip, the standing Zottman curl is a great variation for building up not only your biceps but your forearm strength and size as well. This great exercise can also add variety and help overcome boredom with your routine.