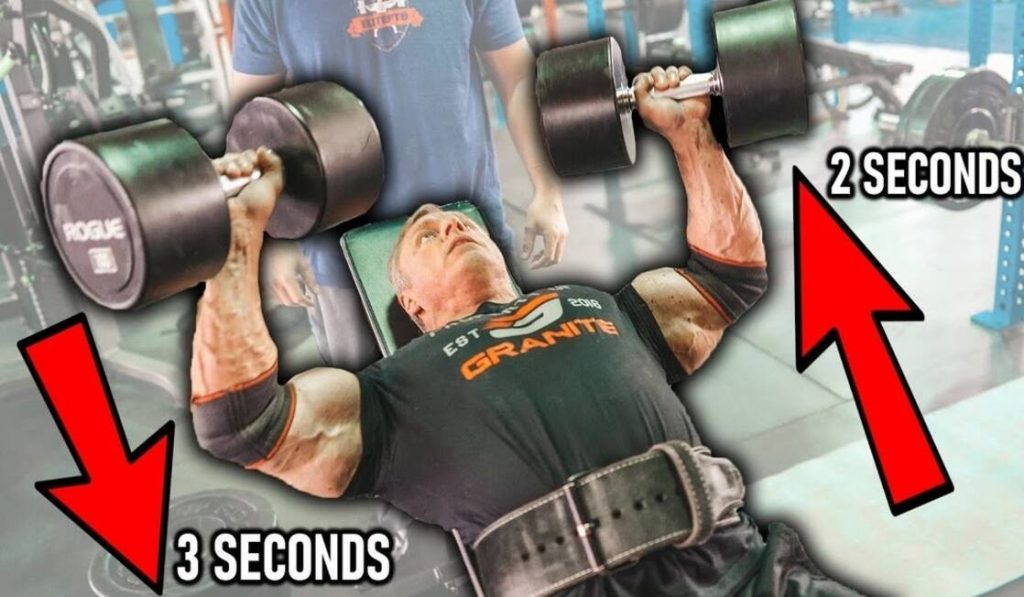 What is tempo when lifting weights?

For example, the concentric portion of a biceps curl takes place when you bring the bar up toward your shoulders. Alternatively, lowering the bar constitutes the eccentric phase of the lift. The isometric phase occurs at the top position and bottom portion of the lift because the weight is stationary at these points.

Recognize that some exercises start by lowering a weight (squats, leg press, bench press, etc) and some start by raising it (biceps curls, leg curls, shoulder press, etc). The first number always corresponds to the concentric contraction in any movement, regardless of which phase typically starts that exercise.

How fast (or slow, depending on your perspective) should you lift?

With respect to concentric repetitions, the best advice is to lift explosively. Provided that you maintain control throughout the lift, try to move the weight as quickly as possible. This generally results in speeds of one to two seconds to complete the concentric action. (You will necessarily perform the last few reps of a set more slowly than the first few reps as a result of increased muscle fatigue, but the intent is always to lift in explosive fashion.)

A somewhat slower tempo is beneficial on the eccentric portion of a repetition. As a general rule, this phase should take about two to three seconds. Understand that eccentric exercise is perhaps even more important to the growth response than concentric contractions. Here’s why. Eccentric actions involve lengthening a muscle under tension, which results in a preferential recruitment of fast-twitch fibers. Because fewer fibers are called on to produce force during eccentric movement, those that are active are forced to bear a greater amount of tension. As a result, microtrauma is increased, leading to greater remodeling of muscle tissue.

The take-away message is to resist gravity when lowering the weight. If you don’t, you’re missing out on more than half of the muscle-building benefits of the exercise!

The isometric portion of the lift is less of a concern from a muscle development standpoint. Some fitness pros recommend holding the top phase of the lift for a second or so to generate a peak muscular contraction. Research to support such a practice, however, is lacking. Your best bet is to maintain constant tension on the target muscle by not locking out the joint at the top of the lift. Provided that you perform each rep in a smooth, controlled fashion, eliciting a peak isometric contraction is superfluous.

The weight lifting tempo is the rate at which you move during both the concentric and eccentric phases of the repetition. It’s the speed of the movement.

Generally, it is important to control the weight. A slow, controlled lift is usually the safest and most effective way to perform an exercise. A general rule would be to lower the weight (eccentric movement) at a pace of about 2 to 3 seconds and to lift or push the weight at a pace of about 1 to 2 seconds. To make it short: lift explosively (or faster), lower more slowly than lifting.

The soreness you often feel from resistance training is usually the result of the negative, or eccentric, portion of the lift. While there are some lifting techniques that are ballistic in nature (for instance, power cleans) and require a very fast tempo, generally speaking, a controlled lift with good technique is best.