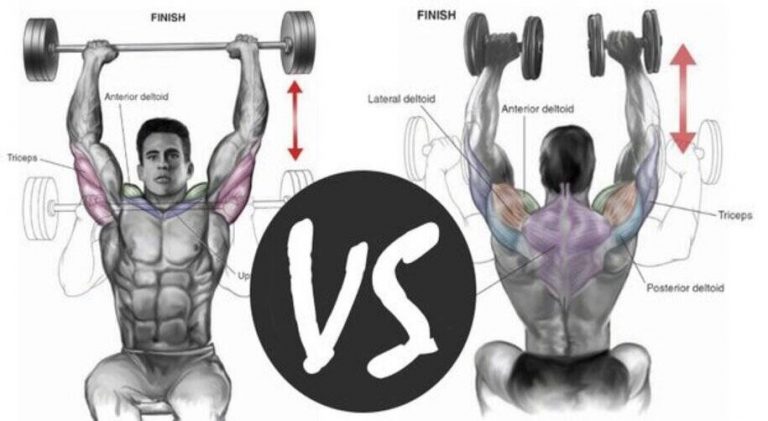 Beautifully shaped, broad shoulders represent one of those parts of the body that at first glance separate us from the crowd. They’re saying for themselves that we are serious about training and in great shape. The shoulder is a ball-and-socket joint between the humerus bone of the upper arm and the scapula bone (shoulder blade). Shoulders provide the foundation for the sharp V-shape that marks a top bodybuilder – a wide upper body narrowing to a small waist. Therefore, thick shoulders will always create the illusion of a smaller waist, producing the coveted V taper. Some people are born with fairly wide shoulders, while others have to work extremely hard to achieve them.

If you are just at the beginning of your physical transformation and have a great desire to be recognized in such a way, this article will give you advice on how to make the best use of your training time by choosing the right exercises and thus bring your shoulders to perfection. After reading this article you’ll know exactly which exercise you should include in your training program and why.

Why shoulder press is such an important exercise for overall shoulder development?

There are so many different exercises to target all three sections of your deltoid muscle – front (anterior), side (lateral), and rear (posterior). You’ve probably heard of exercises like lateral raises, upright rows, shrugs, and rear deltoid flies. These are all great exercises that will certainly bring you closer to your goals, but two exercises that will definitely do the best job and give you the biggest return on your investment time are the barbell shoulder press and dumbbell shoulder press. These exercises are also known as the military press.

If you dream of having huge, barn-door shoulders and you haven’t tried a barbell press, here’s a reality check: You ain’t trying hard enough. This press isn’t for sissies — it’s challenging, somewhat uncomfortable, and in all ways a high-intensity activity. That said, it’s also one of the best, most efficient ways to get from Point A to Point B in your deltoid development. Therefore, without any doubt, this classic compound movement is the most effective overall shoulder exercise you can do.

Many variants and execution techniques are associated with these two by far the most popular exercises, and this is not at all surprising, judging by their ability to build muscle mass in the shortest time and also to support the execution of some other exercises.

Each of them has its advantages and disadvantages, which we will present below so that in the end you can decide in favor of the best one.

The barbell shoulder press is the first choice for many when it comes to increasing shoulder muscle mass. This is not surprising given that this exercise stands alongside other popular and effective exercises such as squats, deadlifts, chest presses, and rowing – which are considered the basics of any good weight training.

As a multi-joint exercise, the barbell shoulder press allows you to load yourself with heavier weights and thus achieve an increase in muscle mass and strength over a longer period of time using the principle of progressive loading.

You can do it sitting or standing. Doing overhead presses while standing requires using your whole body for stability. Anyway, the execution technique is almost the same in both exercise variants. It is important to grip the bar firmly with a grip slightly wider than shoulder width so that the forearms can be kept vertical under the bar during the whole range of motion. You should start the movement at the base of the neck so that the bar is placed in front of your face.

Place your elbows inwards and in one movement push the bar in a controlled manner along a slightly inclined path, completing the lifting movement above your head. Without locking your elbows, squeeze your shoulders and slowly and under the control return the bar to the starting position.

Shoulder presses should be performed in front of the neck. This is important! Shoulder presses behind the neck put undue stress on the shoulder’s joints, tendons and ligaments.

Like all other multi-joint exercises (involving more muscle fibers and motor units in movement), this exercise has the ability to develop strength like no other that is tied to shoulder development. This is because, as already mentioned above, it allows you to use heavier weights which leaves plenty of room for improvement and challenge.

For a heavier load, the barbell is always more appropriate. It would be perfectly safe, for instance, to go to a three- to five-rep-max load and perform the barbell press, while that would really not be appropriate for the dumbbell press — it would just be awkward getting the dumbbells into place, for one.

Also, through greater activation of the front and middle head of the shoulder as an agonist in the pressing movement, this exercise has the advantage of using heavier weights and building muscle mass and strength of other adjacent muscle groups that participate in the movement as synergists – trapezius, triceps and upper chest.

With all the mentioned advantages in building strength and muscle mass comes the disadvantage of a greater possibility of injury. Namely, the very way of performing this version of the vertical press can be dangerous due to the tendency of excessive accumulation of weights, even more so if it is performed incorrectly.

It is not uncommon to see various consequences of performing this exercise, which often arise precisely because of carelessness and exaggeration, especially at the beginning of training. It should also be emphasized that the lack of shoulder and thoracic mobility often affects poor performance in some people and additionally increases the risk of injury, as well as the danger of lumbar hyperextension in the standing position, which occurs due to the inability to carry the body with heavy weights.

The most common way to vary the shoulder press is by using dumbbells instead of a barbell. As with the barbell shoulder press, you have the possibility to perform the exercise in a seated or standing position, but for the purposes of this article, we will consider the seated version.

Pressing with dumbbells is another effective and often-seen exercise in gyms, which is often preferred mainly for the sake of practicality, i.e. greater availability of the equipment itself. And not only that, this is an exercise that is really effective for a complete, balanced development of the shoulder muscle mass due to the even and greater activation of all heads of the deltoid. It is virtually impossible, for instance, to hit the posterior deltoid using a barbell.

After correctly positioning yourself on the bench, carefully take a pair of dumbbells of the appropriate weight from the floor (if it’s easier for you, lift them first on your knees), and swing them with a controlled movement to bring them in line with your shoulders. With your elbows at the sides of your body, push the dumbbells up above your head without locking your shoulders or bringing the dumbbells together. With a controlled movement, lower them again to the shoulders and continue to perform the prescribed number of repetitions.

Considering that you are using two separate dumbbells, this exercise requires you to pay more attention to maintaining balance. Unlike the first exercise, in this one, due to the position of the elbows, you will hit the middle and rear head of the shoulders more, and thus affect a more balanced development of your shoulders. Meanwhile, the barbell press relies more on the front dell, which is also important but is usually already thicker in most guys, thanks to heavy incline bench pressing. Also, due to less possibility of using heavier weights, the risk of injury will be significantly lower.

One of the disadvantages of doing shoulder presses with dumbbells is the waste of energy that goes into stabilizing the load as opposed to pushing the bar. This is not a good choice for you if developing strength is your priority. If you’re planning to perform this exercise with a limited range of motion (partial repetitions) to push through with heavier weights, you may experience a greater risk than this exercise alone carries.

Difficulty with initially lifting a heavier weight above the head in this way also creates a problem for some. You should also take care to keep your back firmly against the backrest during the performance to ensure that your body remains in an upright position, thereby reducing the risk of possible injury or inadequate execution of the exercise itself.

Of course, as always, deciding which of these two exercises to include in your training regimen depends solely on your personal preferences, goals, and past and/or current injuries. Each of the above has its advantages and disadvantages and requires a certain level of control and technique, but the most important thing is that both will serve you well.

The dumbbell shoulder press is an exercise for unilateral work, correcting asymmetries, and can be more comfortable for some people, perhaps if you train looking for aesthetics, We would give more priority to this version. However, the barbell shoulder press allows strength athletes to move a greater kilogram which will translate into greater strength gains.

Get the most out of each by rotating them from workout to workout, leaving the barbell for strength days and the dumbbells for hypertrophy-focused high-rep days to ensure you’re doing everything you can to reach your goal.

Just pay attention to the correct performance technique and that your degree of mobility corresponds to the requirements of the exercise you choose.