The cable front deltoid raise is a great way to target the front deltoids with constant tension from the cable to maximize front delt muscle fiber involvement.

Low-pulley front raise is a variation of the front raise, one of the standard shoulder exercise movements. You can perform cable front deltoid raise using D-handle, rope, and short bar attached to the low-pulley. That means that you are able to perform cable front raises with both arms at once (simultaneously) or with just one arm at a time (if you use D-handle attachment). On the one-arm version you can extend the range of motion by going past parallel at the top of each repetition. Using cable (instead of dumbbells or barbell) you will achieve constant resistance throughout the movement. The front raise is a good exercise to superset with a shoulder pressing exercise.

STARTING POSITION (SETUP): Attach a D-handle to a low pulley cable and stand close to but facing away from the weight stack. Hold the handle with your right hand using an overhand grip (palm facing down). Keep your eyes forward and hold the handle just off your thighs pulling weight off the stack. 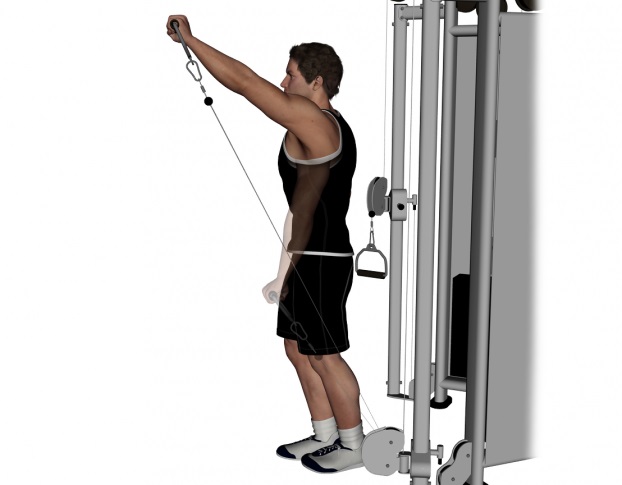 EXERCISE EXECUTION (MOVE): Lift your arm straight in an arc to head height (around shoulder height or little above). Keep your elbow in position throughout the movement (a slight bend on the elbow is allowed). Pause, then slowly lower back to the starting position. Complete the prescribed number of repetitions with your right arm, then immediately switch hands and do the same number with your left arm.

Low-pulley front raises contracts the deltoid (mainly the anterior deltoid) as well as the clavicular head of the pectoralis major and, to a lesser degree, the short head of the biceps brachii. 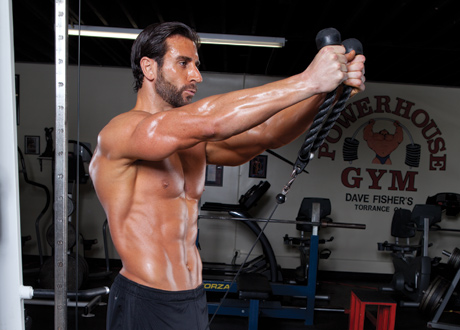 To target your front deltoids you can substitute front raise movement with any type of shoulder press movement (using barbell, dumbbells, machines). We propose one of these front deltoid exercise:

When you perform the exercise unilaterally or bilaterally using a low cable pulley you will have more fluid resistance, which is less traumatic for the joint. That’s why this is the best variant to perform front raises.

Furthermore, this exercise can also be done with two arms (using a bar or rope), but using only one has the advantage of reducing the strain on your back.

As is usually the case with cable exercises, the main difference from dumbbells or free weights in general is that you will achieve constant resistance throughout the movement.

You can do this exercise using a rope handle, with the position of the hand neutral during the raise, which some people find helps isolate the front of the deltoid. In this case, you should never fully extend your elbow.