How the body reacts to injury? Our body is very smart and organized. It knows exactly how to react to an injury and how to begin healing itself. The body reacts with pain so that you know right away it’s time to stop exercising, playing or moving around. Immediately after that your body starts with the process of soft tissue healing. Wound healing entails three overlapping phases: inflammation, proliferation, and maturation (remod­eling). This article provides an overall description for each of the stages of soft tissue healing.

It’s important to keep in mind that the stages of normal tissue healing can and do overlap sometimes. Furthermore, timeframes for each of the phases are not definite because normal wound healing is very tissue dependent.

This stage (also known as the acute stage) usually lasts for three to five days unless aggravated by additional trauma, as happens when an athlete returns to partici­pation too soon after injury.

Inflammation is a local response to cell damage within a tissue and is a chain of events that helps the body to repair, re-form, or form new scar tissue. Excess pressure, friction, overload, over-stretching or impact trauma are the main causes of inflammation from sports injuries.

There are five main signs and symptoms of inflammation:

Immediately following injury, blood flow to that area is decreasing (vasoconstriction) and pain and loss of function symptoms occur. A few minutes after the injury occurs, blood flow is returning to the injury site and increases (vasodilation) dramatically—up to 10 times more than normal blood flow. This increased blood flow constitutes the swelling and inflammation often seen with injury and acts as a catalyst or trigger tor the healing process to begin within the damaged area. The swelling, pain, and loss of function all decrease the athlete’s desire and ability to move and participate. This is the body’s method of protecting itself from further damage.

The best treatment during the inflammatory phase

The best treatment for the athlete during the inflammatory phase is rest, ice, compression, and elevation  (RICE). The RICE treatment protects from further injury while allowing the phase to run its course and prepare the injured area for repair.

To reduce pain and inflammation, doctors or other healthcare providers sometimes recommend the patient takes nonsteroidal anti-inflammatory drugs (NSAIDs), such as aspirin, ibuprofen, ketoprofen, or naproxen sodium. For more severe pain, doctors may prescribe NSAIDs in prescription strengths. It should be noted, however, that the cause of pain and inflammation is never a deficiency of NSAIDs; instead the therapist must seek and treat the real cause of the ailment.

In essence, the entire acute inflammatory phase re­sults in a walling off of the damaged area from the rest of the body—along with the formation of a mass of cellular debris, enzymes, and chemicals that serves to clean up the destroyed structures (thereby reducing the likelihood of infection) while also providing the necessary components for tissue repair. Of all stages of soft tissue healing this one is the most painful one.

This is a short video to explain the most important things you need to know about inflammation in joints, muscles, tendons and ligaments.

The proliferation or repair phase begins while the inflammatory phase is still active, around day 2 or 3 and can continue for anywhere from 2 to 6 weeks.

During this second phase, the last of the debris is removed, the site is prepared for recovery, and new cells are generated to replace those lost during the trauma.

Connective tissue and collagen fibers (known as fibroblasts) arrive to strengthen the injured area. These fibers are placed randomly throughout the area to protect the site from any and all abuse. Fibroblasts are the precursors to collagen, a cells present in connective tissue capable of forming collagen fibers. Over the coming weeks the new tissue increases in strength as the collagen fibers start to form cross links between each other.

Unlike the inflammatory phase where the same process occurs no matter what type of tissue is involved, this phase of healing is slightly different for bony tissue versus soft tissue. In bony tissue injuries, osteoblasts (bone-producing cells) take the place of fibroblasts and create new bone tissue in the injured area. Osteoclasts also enter the affected area at this time in an attempt to remove the damaged bony tissue.

These two cellular organisms work in unison to remove debris and repair the injured tissue. Osteoblasts create a fibrous vascularized tissue, known as a callus, that recon­nects the two ends of the fractured bone. The callus is progressively strengthened from a weak immature tissue back into the strong bony tissue that was present before the injury. This strengthening occurs during both the repair phase and the final phase, known as remodeling.

As the injury is still in a stage of repair, carefully monitor the rehabilitation and make sure that you avoid any excess stress on the injured tissue as this could lead to re-injury.

During the proliferation phase of the healing process, the body: fills the wound with connective tissue (granulation), contracts the wound edges (contraction), and covers the wound with epithelium (epithelialization).

The remodeling or maturation phase is the final and longest phase in the healing process. It’s marked by the shrinking and strengthening of the scar. This is gradual, transitional phase of healing that can continue for months or even years after the wound has closed.

These are the main characteristic of this phase:

In soft tissue, these processes begin about 3 weeks post-injury, overlapping the proliferative phase. Because scar tissue is fibrous, inelastic, and non-vascular, it is less strong and less functional than the original tissues. The development of the scar also typically causes the wound to shrink, resulting in decreased flexibility of the affected tissues.

Although the epithelium has typically completely regenerated by 3 to 4 weeks post-injury, the tensile strength of the wound at this time is only approximately 25% of normal. After several more months, strength may still be as much as 30% below pre-injury strength. This is partly caused by the orientation of the collagen fibers, which tends to be more vertical during this time than in normal tissue. The collagen turnover rate in a newly healed scar is also high;  therefore, failure to provide appropriate support for the wound site can result in a larger scar.

Your main goal through this stage

Your main goal through this stage is to increase the level of rehabilitation, including more mobility, strengthening, flexibility, power and proprioception work which are all essential for the long-term
functional rehabilitation of repairing tissue. Proprioception is simply the body’s ability to sense
movements within joints and joint positions.

This is a short video to explain the most important things you need to know about inflammation in joints, muscles, tendons and ligaments. 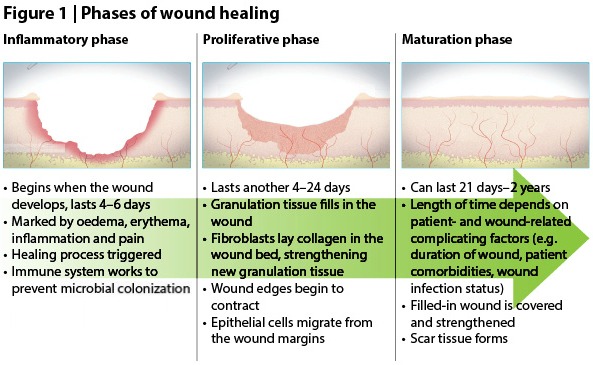 When an injury damages tissue, the human body reacts rapidly in a predictable sequence of physiologic actions designed to repair the injured tissues. Healing of dam­aged tissue is a three-phase process involving acute inflammation, proliferation, and maturation. All three stages of soft tissue healing are equally important.

The inflammatory phase is the first phase of the healing process characterized by swelling, pain, redness, and loss of range of motion. This phase lasts from 24 to 72 hours.

Repair phase is the second phase of the healing process, characterized by initial tissue repair and new tissue generation. This phase begins 48 to 72 hours after the injury and lasts for approximately 2 weeks.

The remodeling phase is the third and final phase of the healing process. This phase is characterized by scar tissue formation and connective tissue maturation. This phase begins 48 to 72 hours after the injury and may last for up to a year.