Muscles That Act on the Hip 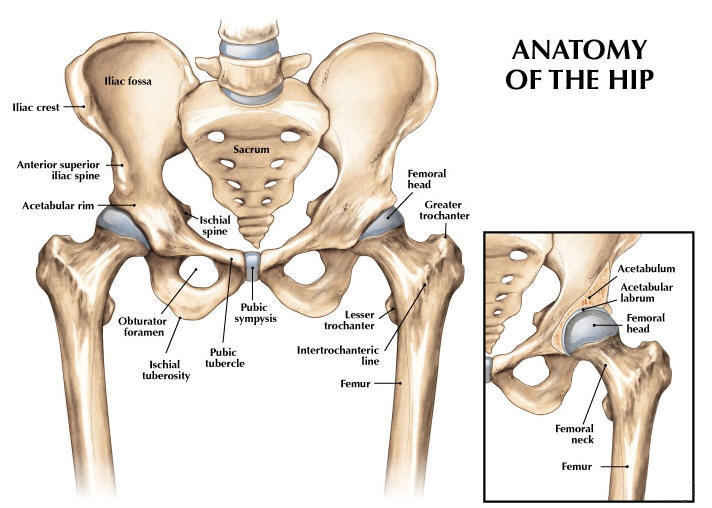 Anatomy of the Hip

The hip is a ball-and-socket joint between the upper end of the femur and the pelvic bone. The hip joint is formed by the femurs (upper leg bones) where they mesh with the pelvic girdle. The three bones of the pelvic girdle – the ilium, ischium, and pubis – come together in such a way that six basic movements are possible: flexion, extension, abduction, adduction, internal rotation, and external rotation. Since the hip joint can move in so many different directions (and because of this it’s inherently unstable) – it is protected by a variety of muscles. Many strong muscles that cross the hip joint have a significant stabilizing effect on the joint. Because of their importance in supporting the weight of the body and generating the large forces associated with locomotor movements, these muscles are more massive and stronger than those associated with the upper extremity. In this post we will mention only the most important muscles.

Most Important Muscles of the Hip Joint

Multiple muscles as well as several important ligaments surrounding the hip joint provide strong support,  making possible the major movements of the lower extremities that are necessary for our daily activities. More precisely, twenty-two muscles cross the hip joint. However, despite the large number of muscles involved, they are arranged in a logical way that makes remembering their actions easier. There are four groups of muscles that act on the hip joint. 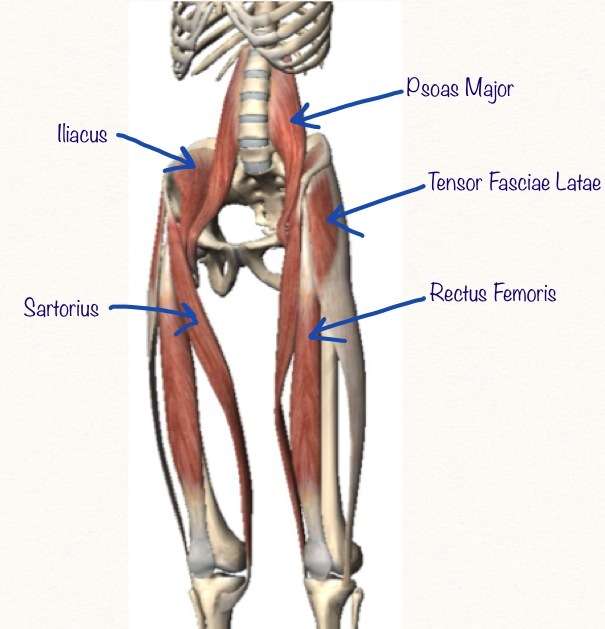 The anterior muscles of the hip include the iliopsoas (this group includes three muscles—the iliacus, psoas major, and psoas minor), rectus femoris (one of the four quadriceps muscles of the thigh), and sartorius.

These muscles cross anterior to the axis of the hip joint for flexion – extension and so share the common action of hip flexion used in movements such as walking, running, or leaping. In other words, they function to bring the torso toward the thighs, or the thighs toward the torso.

The primary muscles that create hip flexion are part of a group called the iliopsoas. All insert through a common tendon on the femur to flex the hip and externally rotate the femur. Each psoas muscle also assists in lateral flexion of the trunk. Secondary muscles for hip flexion are the rectus femoris, and the sartorius. The rectus femoris is primarily a knee extensor, but because of its origin on the pelvis, it also is a hip flexor. The sartorius is a curious muscle that begins roughly in the area where one might suffer a hip pointer (anterior superior iliac spine) and then runs sort of diagonally down the medial thigh and inserts behind the tibia below the knee, giving it numerous actions: hip flexion, knee flexion, hip abduction, and lateral rotation of the hip. Although these muscles are secondary for hip flexion, they are no less important. 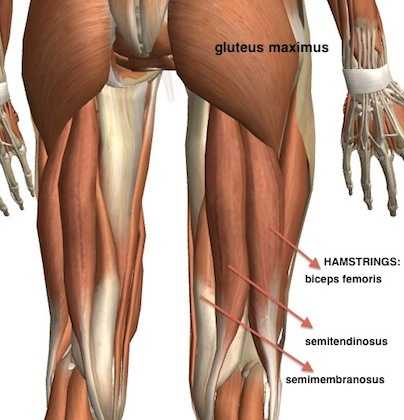 The posterior muscles of the hip include the gluteus maximus (the largest muscle in the body), hamstrings (which consists of the biceps femoris, semimembranosus, and semitendinosus muscles), and deep outward rotators. All three of these muscle groups cross posterior to the axis of the hip joint for flexion – extension, and the gluteus maximus and hamstrings share the common action of hip extension. During hip extension you move your leg behind your trunk (opposite of hip flexion). The hip extensors are well suited for propulsive activity such as jumping and running due to their large cross-sectional area and the power they can generate.

The three hamstring muscles (biceps femoris, semimembranosus, and semitendinosus) originate near the bony prominences on which you sit and insert below the knee on the back of the tibia and fibula. Their main function is knee flexion, but the pelvic attachment means they also perform hip extension.

The other main muscle is the gluteus maximus, the large muscle of the buttocks. It forms the roundness of the back of the buttocks. This very powerful muscle has a broad origin along the back of the pelvis and narrows to insert on the back of the proximal end of the femur. Because of the diagonal direction of its fibers, the gluteus maximus also can rotate the femur laterally as well as assist in trunk extension. It is the most powerful hip extensor and is crucial for movements requiring large forces such as going up stairs, walking up hills, running, and jumping.

The deep outward rotators, or deep external rotator muscle group, is comprised of the piriformis, obturator internus, obturator externus, gemellus inferior, gemellus superior, and quadratus femoris. This group of six small muscles is located deep to the gluteus maximus in the region of the buttocks. As their name implies, this group of muscles is particularly known for its action of hip external rotation. External rotation is when you rotate one foot away from the other, so your toes are pointing out.

The abductor muscle group is located on the lateral side (outside) of the thigh. The lateral muscles of the hip (abductor muscle group) include the gluteus medius, gluteus minimus, and tensor fasciae latae. Gluteus medius and the gluteus minimus are named for their relative size and position. They all cross lateral to the axis of the hip joint for abduction – adduction and so share the common action of hip abduction. This means moving the thigh away from the midline of the body. These muscles also play a very important stabilizing role in standing and locomotion. When the weight is on one leg, these muscles act to prevent the pelvis from dropping down on the opposite side or the support femur from excessively adducting (“sitting in the hip”).

The gluteus medius is a small muscle that lies laterally above the gluteus maximus. It is visible from the side and the rear. The gluteus minimus is also a quite small muscle that lies laterally below the gluteus maximus. Therefore, it is not visible at all. The tensor fasciae latae is a small muscle located at the front and side of the hip. Its name is derived from the fact that its action Is to lighten this fascia, thereby providing Important lateral support for the knee Joint. At the hip joint, in addition to its role in hip abduction, it assists with hip flexion and hip internal rotation (the latter at least when the hip is flexed). 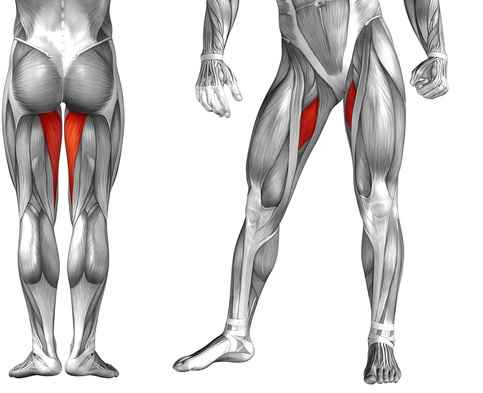 The adductor muscle group, also known as the groin muscles, is a group located on the medial side of the thigh. These medial muscles are sometimes called the “inner thigh muscles”. The medial muscles of the hip Include the adductor brevis, adductor longus, adductor magnus, pectineus, and gracialis. Since all of these muscles cross medial to the axis of the hip joint, they all share the common action of hip adduction – moving the thigh towards or across the midline of the body.