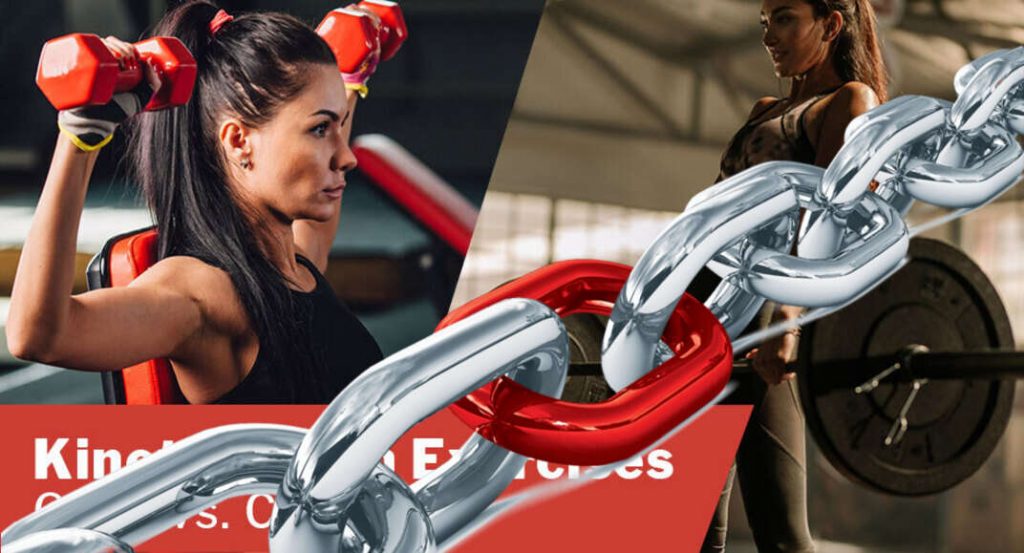 In relation to resistance training there are two broad categories of exercise modes – that of open kinetic chain and that of closed kinetic chain exercises. Kinetic (from the Greek word kinesis meaning ‘motion’) chain exercises refer to the way in which joints in the body link the limbs performing the exercise together as in a chain.

The concept of the kinetic chain, or kinetic link, originates from the area of mechanical engineering. Reuleaux proposed the engineering link concept in 1875 in Heidelburg, Germany, in what has been described as theoretische kinematik, or kinematic theory (Gowitzke and Millner 1988; Steindler 1973). In Reuleaux’s theory, rigid, overlapping segments were connected via pin joints. These interposing joints created a system whereby movement at one joint produced or affected movement at another joint in the kinetic link.

The conceptual framework proposed in engineering for describing rigid structural elements was adapted by Steindler (1955) and extrapolated to include the analysis of human movement, including exercise and sport-specific activity patterns. Steindler (1955) proposed that the extremities be thought of as rigid, overlapping segments in series; he defined the kinetic chain as a “combination of several successively arranged joints constituting a complex motor unit.” These series, or chains, can occur as either of two primary types: open or closed.

In short: Kinetic chain principle describes the body as a series of sequentially activated segments.

Closed kinetic chain exercises (CKCE) are those in which the distal end of the extremity (foot, hand) is in contact with a supporting surface (that is either stationary or moving). They generally involve motion in several joints. We can also describe CKCE as exercises in which the body is moving in relation to the load.

From a performance perspective, closed chain kinetic exercises have higher transfer of training effects to specific sporting movements and activities of daily living.

The squat, for example, produces a linear stress pattern at the tibiofemoral joint. This pattern is due to the axial joint loading that occurs with weight bearing and closing (fixture) of the distal segment. Movement occurs during the squat at multiple joints using multiple-joint axes at the hip, knee, ankle, and subtalar joints. Closed kinetic chain exercise patterns occur with simultaneous movement of both segments that form the utilized joints. This simultaneous and segmental movement causes the increase in muscular co-contraction needed to stabilize and control the movements across the joints in that kinetic link system.

Open kinetic chain exercises (OKCE) are those in which the distal end of the extremity (foot, hand) is free to move in space; they generally involve motion in one joint. We can also describe OKCE as exercises in which the load or resistance is moving in relation to the body.

Examples of open kinetic chain exercises. Lying (or standing) leg curl or machine leg extension are an examples of an open chain kinetic exercise, where the distal portion of the body (the legs) moves freely against resistance. Another example of an open kinetic chain would be waving the hand or movement of the foot during the swing phase of gait. Lat pull-downs using resistance machine is another popular example.

Closed-chain exercises generally use more than one muscle group. A leg press or a squat will work the quadriceps, hamstrings and gluteals.

Open-chain exercises usually involve muscle isolation. The leg extension works only the quadriceps. Because of the shearing force applied to the joints, many top-level orthopedists and physical therapists advise against this exercise.

What is the best type of exercise?

A question that naturally arises is, “What is the best type of exercise?” The answer is that both open and closed kinetic chain exercises should be part of a rehabilitation and physical fitness program. If one thinks of a basic movement, such as walking, there are both open (swing phase) and closed (stance phase) components to this motor skill.

Selection of the type of exercise could be goal specific – depending on the specific needs of each person. Each exercise category has its own unique benefits. For example, CKCE exercises are more functionally related to sporting movements or lifestyle activities as they typically involve forces against the ground. Also, CKCE exercises can improve balance, stabilization and proprioception and should therefore be the integral part of an overall exercise program for most individuals.