You can always add more weight and increase the number of repetitions. But there are many other available techniques to increase the intensity of your workout. Supersets are one of these techniques. They provide an efficient workout – maximum benefit in minimum time. In this post you will discover the logic behind this great advanced training technique. Maybe this is the best method for your bodybuilding goals.

Supersets: What’s the theory behind supersets, and are they effective?

Supersets consist of putting two different exercises together without taking a break. That means you do pairs of two exercises without resting within each pair. You do rest for 1-2 minutes before moving from one superset to another (from one pair to another).

There are two kinds of supersets:

The main advantage of this strategy is that it saves you time. In effect, it is no longer necessary to rest between sets. You rest only as long as it takes to switch from the first exercise to the second. The biceps will recover while the triceps is working. The triceps will rest when you work the biceps. In addition to improving your strength, your endurance will improve. 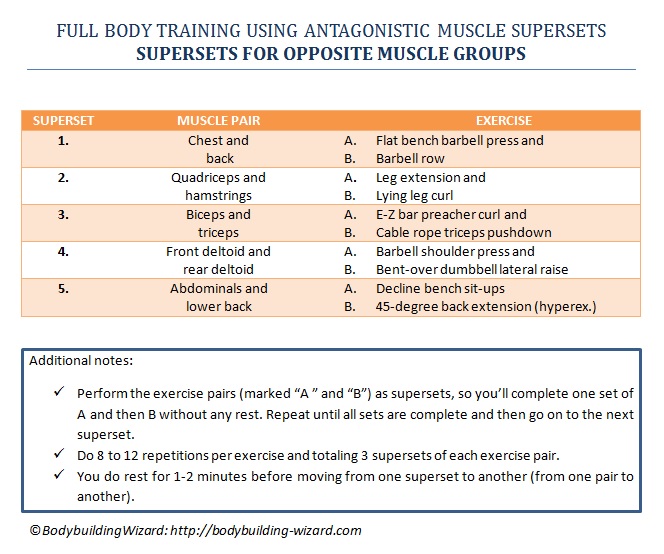 The advantage of this method is that you will keep the blood within the same area of the body, thus encouraging a greater flow and bringing more fuel, oxygen and nutrients to the muscle. Since the rest period is eliminated, it is also a good way of reducing your workout time. This is particularly useful if you have only a limited period in which to train.

Unlike supersetting the same muscle group, this method does not significantly increase the muscle overload. However, it does increase the demands on your cardiovascular system since the rest periods are greatly reduced. This will help you to improve lactic acid tolerance, raise the anaerobic threshold and develop better stamina. This is also a great way to burn fat using weight training.

Supersets for the same muscle

You do two exercises in a row for the biceps, for example. The objective is to increase the intensity of the effort. These supersets are similar to tapering but involve changing the exercise. The second exercise uses less weight than the first, which means you can continue the set beyond failure.

There are three kinds of supersets for the same muscle:

This superset includes either two multijoint exercises or two isolation exercises. The goal is simply to do two exercises in a row so that you go beyond failure. The sophistication of the other two variations of supersets explains why they are more popular than classic supersets.

In the shoulder example, you give everything you have during the shoulder press (multijoint exercise). You do not have to worry if fatigue in the triceps forces you to stop the move­ment, since you are going to go at it again with an isolation exercise that targets only the deltoids. Another example would be completing a set of bench press, followed immediately by a set of flyes (obviously with a reasonably light weight).

The advantage is that the stress on the muscle is increased as the muscle can be worked from slightly different angles, thus involving more muscle fibres. Using this type of supersets you will increase the blood flow to the muscle due to the increased energy demand. This will provide greater stimulation for hypertrophy. However, this type of superset training should not be used for every body part or at every workout as it is very intense and may lead to overtraining or injury.

A few decades ago, long workouts were thought to be the only way to produce the muscle breakdown required to promote bulk and better definition. Since then research has shown that efficient workouts can provide the same or better results in a fraction of a time. Supersetting is an example of such efficient workout because using supersets you have the opportunity to pack twice as much exercise into the same workout time. Hence, supersets are an effective way to build muscle and burn fat at the same time.

How Can Yoga Take Your Bodybuilding Goals to the Next Level and Vice-Versa?